PARIS — The latest in a series of controversies that have surrounded the renovation of Notre-Dame unfolded on Thursday, when a commission of heritage experts gave the green light to a revamp of the interior of the fire-stricken cathedral.

France’s National Heritage and Architecture Commission approved proposals by the diocese of Paris to bring a more modern look to Notre-Dame before its planned reopening in 2024, including the installation of contemporary artworks and new lighting effects. Opponents say the changes will debase the 850-year-old cathedral and disturb the harmony of its Gothic design.

The heritage commission also authorized cathedral administrators to rearrange the tabernacle and other items to create more room for visitors. Msgr. Patrick Chauvet, Notre-Dame’s rector, said the proposals would allow for an easier and more pleasant visit to the religious monument and create “a dialogue” between Notre-Dame’s medieval architecture and new, more modern features.

Artworks from the 20th and 21st centuries could be placed next to old master paintings from the cathedral’s collection, such as Mathieu Le Nain’s “Nativity of the Virgin Mary,” Chauvet said.

He added that the diocese was also considering light projections on the walls of some chapels that would display short text excerpts from the Bible.

Most of the confessionals would be moved to the first floor in the rearrangement of the cathedral’s 2,000 or so furniture items, Chauvet said, and Notre-Dame’s more than 12 million annual visitors would now enter through the central portal instead of via a side door.

“The idea is that the faithful, or visitors, are first struck by the grandeur, by the beauty of Notre-Dame,” Chauvet said.

Yet the addition of modern touches threatens to disfigure the cathedral, according to dozens of cultural figures and intellectuals who have stood up against the proposals.

Notre-Dame has already gone through more than two years of careful restoration efforts, after a blaze tore through it in April 2019, destroying the spire and most of the roof. The building has now been secured enough to start the rebuilding process, which is expected to be completed just in time for the 2024 Olympics in Paris.

French authorities initially contemplated seizing the opportunity to significantly rework the cathedral’s architecture. Heritage experts eventually recommended that the monument be restored to its prior state and, last year, President Emmanuel Macron dropped the idea to replace the 19th-century spire with something more contemporary.

On Tuesday, about 100 public figures in France signed their names to an open letter in the conservative newspaper Le Figaro titled “Notre-Dame de Paris: What the fire spared, the diocese wants to destroy.”

The signatories, who include Alain Finkielkraut and Pierre Nora from the prestigious Académie Française, said some proposals recalled “‘immersive’ cultural projects where, often, inanity vies with kitsch.”

Le Monde newspaper said the proposals had led to a fierce battle within the French Catholic Church between “advocates of modernity and ecumenism and the guardians of a nostalgic conservatism.”

Some conservative British newspapers seized on passages in the redevelopment plan about creating “emotional spaces” and “a discovery tour.” A headline in The Daily Telegraph said that Notre-Dame faced a “woke Disney revamp.”

Didier Rykner, the editor in chief of the art magazine La Tribune de l’Art and one of the signatories of the open letter in Le Figaro, said that criticism in the British press was based on caricatures, but that he agreed with their general thrust.

“The church is 2,000 years old — it is an old lady,” he said. “It has a history that we must respect, that today’s people cannot erase with a stroke of the pen.”

The heritage commission may have heard some of the criticism. It did not accept the proposal put before it by the diocese in full, and rejected or questioned some elements. The committee denied a request, for instance, to remove statues of saints from several chapels. It also asked for a review of a design for removable benches that were proposed as a replacement for the cathedral’s traditional wooden chairs, according to a statement issued Thursday by the minister of culture.

Chauvet said that the changes to Notre-Dame’s interior were not revolutionary and would only “bring a little more sense to the visitors.”

Mon Jan 3 , 2022
Detroit | $675,000 A three-bedroom, two-bathroom unit in a midcentury-modern co-op built in 1956 The architect Ludwig Mies van der Rohe worked on a number of projects in Detroit in the mid-1950s, including Lafayette Park, a residential development of high- and low-rise buildings. This unit is in one of the […] 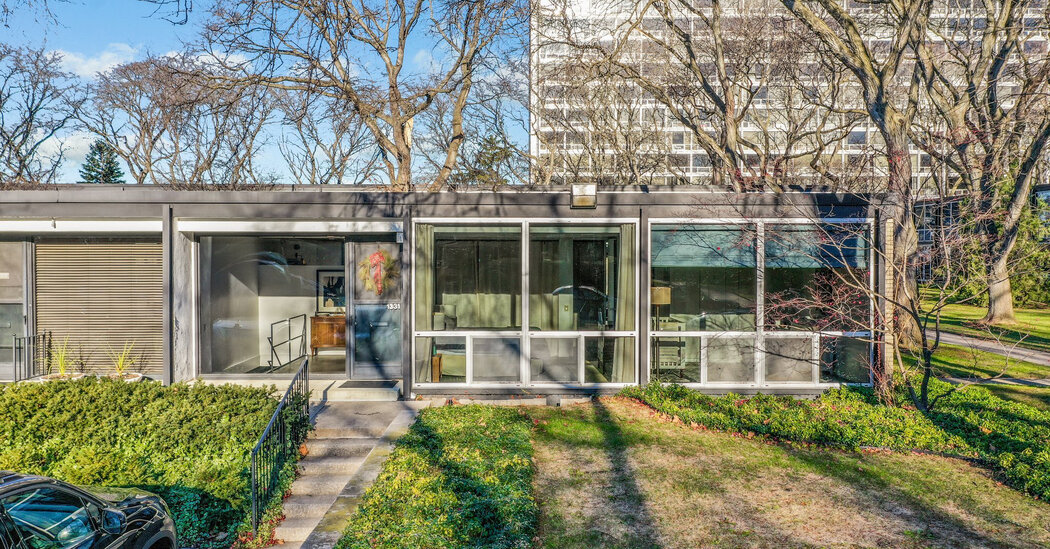