In honor of its seemingly ageless line of “Z” sport motorcycles and the first Kawasaki Z1 that hit the ground running 50 years ago, Kawasaki recently introduced two new models to its Z lineup—the Z650RS and Z900RS, “retro-style,” if you will. The classic-looking RSs join the naked Z650 ABS and Z900 line while paying homage to their Z ancestry, as do the ’22 naked Z versions that are painted similarly to the original Z1 that first appeared in 1972. Look hard at the current Z650 and Z900 for a while, and you can sorta/kinda see the semblance to the original, paint-wise, at least. But the RS models take the celebration a couple of steps further—not only did the RSs get the retro paint scheme like the nakeds did, but they also got the Z1 retro styling. No hard look is needed here; the RSs have Z1 written all over them.

We recently got the chance to spend an entire day riding the Z650RS. Kawasaki invited a handful of media outlets to the heart of Hollywood, where our journey started and ended aboard the Z650RS. In between, our ride was filled with a little bit of everything, including plenty of city, back canyon and freeway riding.

At the heart of the Z650RS is the same liquid-cooled DOHC eight-valve 649cc parallel-twin engine and steel trellis frame you’ll find in the naked Z650, but styling, of course, and ergonomics are very different. The RS has a much more relaxed riding position than the Z650. This was achieved by positioning the RS’s upper triple clamps 0.8 inches higher and installing flatter and wider handlebars that are also two inches higher and 1.2 inches closer to the rider at the grips. Footpeg positioning is different, too, and the new stepped seat is nearly a half-inch taller, which means more legroom. Overall seat height is still low enough at 31.5 inches.

Now the fun part—styling. Kawasaki said it was going for “timeless good looks with simple and modern design touches.” A great example of this is the RS’s 5.1-inch LED round headlight with a thick headlight ring that gives it that extra modern touch.

The 3.1-gallon fuel tank is a near carbon copy of the original Z1 and is pure retro. There isn’t anything modern about it except for the flush-mounted locking gas cap.

The side covers have that retro look but with a touch of modernity. And the tail section isn’t nearly as upswept as the Z650’s, making it more in line with the original Z1. This gives the RS a flatter and more old-school look.

Speaking of old-school, the taillight is oval in design, just like dad’s Z, but it has modern LED internals. There is even an external helmet lock back there. Remember those?

You’ll notice a mix of old and new from the seat—a multi-functional digital readout is sandwiched by an oval analog-style speedometer and tach, both fitted to bullet-style casings. The LCD screen features white lettering on a black background, revealing all the usual information, including ERI (Economical Riding Indicator), clock, and a gear position indicator.

Kawasaki made no attempt to go retro with the RS’s 2-into-1 exhaust system; it looks as modern as can be with its under-engine muffler. Same with the wheels, Kawasaki chose not to go with wire-spoke wheels like the original Z1 but instead sacrificed that nostalgic look for better-performing cast wheels that Kawasaki at least tried to make look like wire spokes. Whether or not Kawi succeeded in that is debatable, but they look good regardless. The swingarm is far from retro-looking, too. One side is arched, the other side straight.

You have two options with the standard RSs—Candy Emerald green and Metallic Moondust gray/ebony—when it comes to color. If you want to take the whole retro thing a little further, consider the limited edition Z650RS Z 50th Anniversary model that Kawasaki also offers. Its main attraction is its “Fireball” color scheme, which pays homage to the 1972 Z1. The anniversary model retails for $250 more than the standard RSs, but you do get a few extras, like a “Z 50th Anniversary” tank logo, “Double Overhead Camshaft” side cover emblems, revised seat material with special colored stitching, and a chrome grab bar. You also get gold-colored wheels, which you also get with the standard green RS. And if you buy the anniversary model, Kawasaki will throw in a special coffee table book that commemorates the 50 years of the Z brand.

The Z650RS is a pleasure to ride. It is everything you’d expect it to be—a very nice and relatively inexpensive around-towner and fun back-roads ripper, all in one tight package, and that’s precisely what Kawasaki had in mind when designing the RS.

When you hit the RS’s starter button, the uninspiring sound it emits, however, won’t send shivers up your spine or get your adrenaline flowing, but we’ve come to expect that from this parallel-twin engine that is found in several other Kawasaki motorcycles, like the Versys 650, Ninja 650 and Vulcan S. Kawasaki chose chill over rush with its 180° crank-timing design. But don’t let the RS’s unenthusiastic sound fool you. The Z650RS is plenty feisty but in a friendly manner.

When we tested the first Z650 five years ago, we said the motor “has a relatively torquey disposition…and has a sporting characteristic that welcomes a strong hand to get it into the higher revs—if so desired—with surprising response for a parallel twin.” Nothing’s changed. The motor is extremely easy to manage and control, which is good for new riders while making excellent power overall for experienced riders. And the RS has a much racier sound when ridden in the higher revs; in fact, it sounds quite nice up there, much better than at idling engine speeds.

We said of the 2017’s motor: “It has an easy-to-ride disposition and forgiving nature courtesy of decent low-end, which translates to easier pull-away from a dead stop.” Again, nothing has changed. However, before dumping the clutch from a stop, I preferred to build up some revs first because the RS I rode had a slight hesitation directly off idle. From what I could tell, so did the other bikes on our ride, but the hitch didn’t take away from any of the fun. (We mentioned a similar issue with the ’17 Z650.) Otherwise, the RS’s engine is exceptionally smooth when it comes to both power delivery and vibration. Clutch pull is also easy on the fingers, and changing gears through its six speeds with your foot is a breeze. Gearing is well-spaced with ratios suited nicely to the 650’s power. Shifting is aided by an assist/slipper clutch that helps tame rear-wheel hopping, often resulting from sloppy downshifts/braking.

Speaking of the brakes, the lightweight RS slows down in a hurry with its more than adequate Nissin triple disc braking system, including non-obtrusive Bosch 9.1M ABS. ABS is standard equipment. The front brake lever reach is adjustable, which is a nice touch. You have five positions from which to choose.

The 41mm non-adjustable KYB conventional-style fork aligns with the bike’s retro look. However, the rear suspension looks all modern with its half gull-wing swingarm and single-shock design. Like the Z650, the RS relies on a KYB horizontal back-link rear shock that offers adjustable preload and 5.1 inches of wheel travel. Overall, the RS’s suspension is quite good. The ride is exceptionally smooth over a wide range of surfaces and feels planted in the turns, but it can get a bit bouncy and busy when speeds pick up on rougher roads. I’d eventually swap out the fork oil with a heavier viscosity if it were mine, but no rush. Kawasaki said the RS’s suspension is set up from the factory for “light, natural response,” which is indeed how it feels.

Comfort is the RS’s best feature (besides its looks). Its upright and relaxed seating position and cushy seat padding are ideal for around-town hops and lengthy back-canyon carving. My 6’1” frame fit the RS just fine with no hotspots to report, and the low seat height meant both my feet were planted firmly on the ground when not in motion. Yours most likely will be, too. The handlebars are well placed, and since they are rubber-mounted, you feel almost zero vibes, nor do the circular mirrors, resulting in clear images. And the instrumentation is easy to decipher and pleasant to look at.

Overall, the Z650RS is a blast. As we said about the Z650, the RS is a fun-to-ride motorcycle for new and experienced riders. Kawasaki said it designed this motorcycle for those who have firsthand experience with the historic Z models and want to relive the old days and for those who simply appreciate the retro image and esthetic, preferring it to the naked image or aggressive sportbike image. We can say, with confidence, that Kawasaki nailed it with the Z650RS. CN

Fri Apr 29 , 2022
They put Thing 1 and Thing 2 to shame. A UK mom’s remodeling session turned disastrous after her two troublemaking tots unleashed a paint flood of Biblical proportions — drenching both the kitchen and their entire bodies in the process. A photo of the hellions’ impromptu Jackson Pollock homage is […] 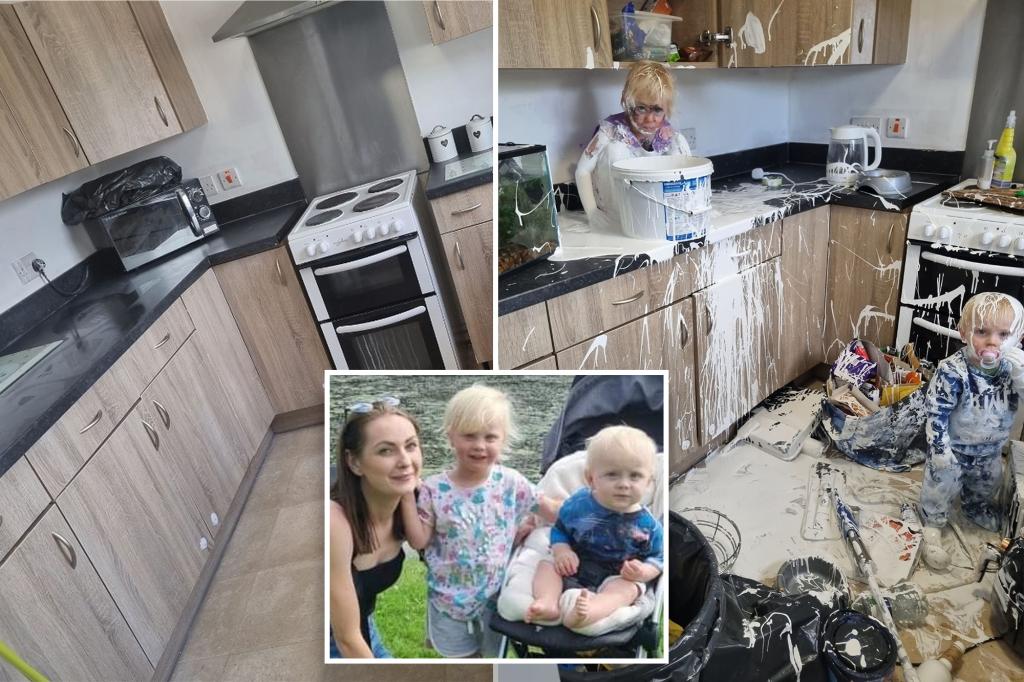