Boots, bandannas, bolos and hats get modern-day updates by Texan-friendly female designers with a distinct point of view and a fondness for heritage pieces. Here, timeless accessories for Rodeo season and beyond.

Malibu-based self-trained milliner Teressa Foglia says she quickly noticed that Houston women wear her bespoke hats in a way that is distinct from clients at her shops in Laguna Beach, New York’s Nolita, Palm Beach and elsewhere.

“With confidence,” Foglia says. Texans favor tall crowns, stiff brims and a lot of color, she says — and they position their hats with authority, “super straight on their forehead,” not tilted back.

Men and women on the coasts might need to be convinced that hats are part of an everyday wardrobe, she says — Texans step up for another one to add to their collection. “We realized there was a really unique taste for hats here and our clients were creating some of the coolest designs we‘ve made.”

It was wildly-successful pop-ups at Katia boutique and La Colombe d’Or Hotel, followed by chance encounters with vacationing Houstonians at her Malibu atelier, that convinced Foglia that Houston was the right place for her first Texas store.

The River Oaks District boutique opened its doors in January with the most minimalist design of all her shops, she says, of the bone-white walls, wood furniture plucked from Round Top, and fine art by her life partner and business partner Tyler Hays Wild displayed behind stacks of hat boxes.

Available in dusty pinks, deep blues, mustards and a range of neutrals, beaver fur hats that are ready to wear out the door might be adorned with hand-stitched flower petals, artfully-splattered inkblots, patterns of constellations on the underbrim, feathers or frayed silk bands.

But most men and women spend time in the store, changing out the vintage silk scarf each hat is lined with, adding charms or a wood-burned personal mantra, switching grosgrain ribbon to build a new band, or watching staff wield a blowtorch for additional distressing.

A customer might bring in an Hermès scarf that was her grandmother’s to become the hat lining — “They get to take the scarf with them every day,” Foglia says — or a locket or other heirloom. Other “very heartfelt” requests include hand-embroidery of lyrics from a poem, the wings of a bird, or an Astros flag.

Once at a pop-up at Rancho Pillow in Round Top, a customer asked for the words “Mama tried.”

Custom additions continue with a cowhide or leather underbrim — “this other element of luxury,” Foglia says — or initials or an important date on the sweatband.

From-scratch hats take about six weeks, beginning with raw felt blocking in Foglia’s Brooklyn studio, brim cutting on a rounding jack, and other Old World practicing. When they’re not in person at a shop for custom design, Foliga or Wild will consult via video.

The River Oaks District boutique stocks a limited amount of Dallas-based hand-lasted Miron Crosby boots and fine jewelry from a Los Angeles designer, along with rotating brand pop-ups such as custom suiting out of Nashville.

Texas hospitality might have already worked on her — the couple is shopping for an apartment to use as a pied-à-terre.

Reared in Kingwood attending the Houston Livestock Show and Rodeo at the Astroworld, sisters Margaret Walker and Sarah Caruth are now residents of San Antonio, where they frequent that city’s rodeo, preferring “the seats where you get dirt in your beer,” Walker says.

Every year at the rodeo, the pair says strangers stop to complement their vintage boots from collections they’ve culled from garage sales and eBay.

It was the pandemic and a “joint midlife crisis,” Caruth laughs, that ultimately inspired them to launch Fraulein Boots, their new collection inspired by those hard-to-find ’60s and ’70s era styles.

With five styles anchoring their debut collection, Walker and Caruth say each was selected for timeless detailing, such as butterflies, daisies and other boots designs they call iconic.

Designed with comfort in mind, the boots are handmade by venerable bootmaker Rios of Mercedes. At the first Zoom meeting that patched them into Rios’ staff in the Valley, “We thought we were interviewing them, and they were definitely interviewing us,” says Caruth.

Accepted as a client, the pair visited the factory to select leathers before passing sketches back and forth to finalize the designs.

The deep turquoise San Antonio Rose adorned with white blooms is “a showstopper,” Walker says. For another, they chose honey brown, a versatile color of the 1970s they say is rarely seen in today’s boots. Ankle-height versions answer the call for an everyday boot. One day they might incorporate a thunderbird as they grow their brand.

They’ll return to Round Top in the spring with the collection, which they say was well-received this winter at holiday markets at Houston country clubs.

“Boots are really having a moment, they’re not just for rodeo anymore,” says Walker. “Western wear is not going away anytime soon” — and its appeal extends to customers far beyond Texas, they’ve learned.

The brand is named for the favorite country-western song of their father, who died when the sisters were adolescents. While they were considering more than a dozen other brand names, Walker heard the 1950s tune on the radio and called her sister to say she had found their new company’s name. “Serendipitous,” says Caruth.

It was stomping through fields in Round Top that Fort Worth-based Megan Clifton first scoured for vintage sterling silver bolos to add to her Southwestern-inspired collection of statement jewelry, Gather Goods.

Clifton shines and cleans the bolos before changing out the cords to bright turquoise, clementine, mustard, fucshia or pale pink — “more modern, a little bit of a fresher look,” says Clifton of the one-of-a-kind pieces.

Canvassing small Texas towns, with a few friends keeping an eye out for her, Clifton says she’s particularly delighted when she unearths a thunderbird bolo accented with real turquoise or a Zuni bird made of mosaic glass.

“The hunt is just as much fun as the gather, if you will.”

Clifton launched her brand in 2019 with fetish bird necklaces inspired by a sentimental strand she received after the passing of her grandmother, an Albuquerque resident with a memorable collection of squash blossom necklaces and other turquoise jewelry.

Those are the types of pieces Clifton says her peers are drawn to, but with a more attainable price point.

For her updated spin on the past-era accessory — a fetish animal is a Native American carving believed to have a special power — Clifton hand-strings vintage birds with brightly-colored beads made from melted vinyl records that she sources from Ghana.

At pop-ups, like ones she held recently in Fort Worth and Houston in conjunction with the rodeos, customers sometimes tell her, “‘I just don’t know if I’m a bolo person.’”

Clifton replies that one can wear a bolo like a necklace, with shorts and a T-shirt, a dress or with anything.

“It’s not just zip it up to your top button that you remember your grandpa wearing,” she laughs. “They just needed an update”

Rich in hand embroidery, no two snap bandannas from Wimberley-based Arloom are alike.

The bandannas, backed in microsuede, are fashioned using scraps from the vintage huipil blouses that Arloom re-sews and re-cuts to make into more modern silhouettes.

Huipil blouses are traditionally worn by women in Guatemala, where Arloom employs artisans to help source the blouses — which have been collected by families and traded for years at markets, causing a soft, well-worn effect — then to hand-dye, repair and re-make the blouses.

If there’s a tear, the team might cover it with embroidered flowers or birds or “put our little spin on them,” she says.

Arloom launched in 2012 with leather goods framed with the same textiles. In recent years, Hewes has shifted focus to the blouses and now, using the excess elaborate textiles, the bandannas — “a fun take” on a traditional accessory, she says.

Her collection is available at her “teeny little shop” in Wimberley, each season in Round Top at The Arbors and at Marburger Farms, and at Houston pop-ups at boutiques such as Abejas and Frock Shop.

Her customers treat the reimagined vintage huipil blouses like “an everyday top,” she says. “The people that ‘get it’ can see it as this art piece… really unique and not everybody’s going to have it.”

“Sissy” is her husband’s nickname for her, and their ranching-and-Rodeo lifestyle has heavily influenced the hats she sells at Round Top, where Light is a fixture.

Along with designing The Frenchie boutique hotel and other interiors projects in Round Top, Light has manned a seasonal hat shop inside Bader Ranch since 2015, where she has amassed a cult following — first for her curation of designer labels such as Lola Hats, now for her very own designs.

During last fall’s Round Top show, Light launched her first collection of her own designs, simultaneous with an e-commerce site.

It took about two years to perfect the crown and the fit of her hats, handmade in Ecuador of toquilla straw and free of over-embellishment, “which is very different from everyone else,” Light says.

“Fit and function has been the root of all of the styles,” says Light of the versatile, year-round hats in modern shapes with clean lines.

Fall was a record-breaking show. “They came back for more and sent all their friends,” she says of long-time customers who, this time, were shopping her own silhouettes.

Moving forward, Light will launch her seasonal collections with each of the three major shows in Round Top, where Light and her team clock about 17 days straight each time.

“I don’t want to miss anyone.” she says, “and I like to style everyone, too, when they come in”

“Round Top has been the center of the brand from the get-go,” says Light, adding that her collection fits as well on a California beach vacation as in city life and back home on her ranch, where her husband works cattle and the family farms.

“I’m not the most Western person,” laughs Light, who studied at Fashion Institute of Design & Merchandising in Los Angeles, “but I feel like we live that lifestyle, and it’s really influenced a lot of the design.”

This spring in Round Top, Light will unveil straw, botanical-shaped earrings that speak to her breezy-cool aesthetic, all the more reason to stay awhile at Bader Ranch for the chef-driven pop-up restaurant and Airstreams offering cocktails.

“I think the big appeal is its wide, open spaces, the hayfield. People come to watch the sunset…. and they just don’t leave.”

Homes That Sold for Around $1.5 Million

Wed Mar 2 , 2022
Each week, our survey of recent residential sales in New York City and the surrounding region focuses on homes that sold around a certain price point, allowing you to compare single-family homes, condos and co-ops in different locales. The “list price” is the asking price when the property came on […] 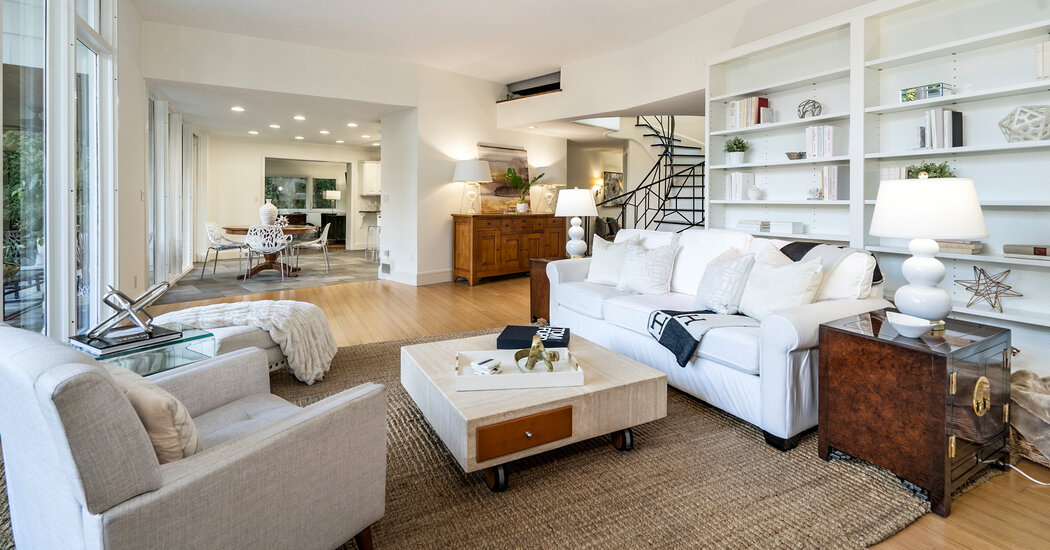