It’s hard to sit on the fence about Marrakech. On the one hand, it’s hot and dusty with street vendors relentlessly vying for your attention in the souks of the medina. On the other, it’s like an Arabian Nights fantasy come alive with the city’s red-brick medina bursting at the seams with stalls packed with all sorts of wares from colorful ceramics and spices piled up into pyramids, to handmade furniture and lanterns. Once you’ve haggled for a Berber rug, watched the world go by as your mint tea cools down at a hole-in-the-wall cafe on the vibrant Jemaa el-Fnaa Square, and you’ve lost (and found) your way around the medina’s labyrinthine lanes, you might think that you’ve sampled everything Morocco’s imperial city’s got to offer. But look again beyond the sweaty frenzy, and you’ll find hidden treasures like a tucked-away Moroccan photography museum, a stylish rooftop bar and boutiques that mix local know-how and contemporary flair, as well as hidden oases serving up respite from the heat.

Stay In Your Own Private Villa

Marrakech is Morocco’s fourth largest city and has the most diverse hotel scene, where accommodations range from riads inside the medina walls to large resorts with breezy gardens outside the old town center. The Mandarin Oriental is one of the latter. A 25-minute drive from the medina, being on the outskirts of the city center has its advantages like 50 acres of magnificently landscaped gardens that truly make the hotel feel like an oasis.

All that extra space also means guests can have their own private villas, which even by local standards are spacious (3,100 sq. ft for one-bedroom villas and 4,553 sq. ft for two bedrooms), enclosed by gardens with a pool and jacuzzi that are plenty to tempt you away from doing anything too strenuous. The hotel’s also got nine suites, seven of which have their own plunge pools, all of which have jaw-dropping views of the Atlas Mountains, which you may be enticed to swap your villa for.

Villas and suites aside, the hotel is one of many corners to hunker down with a good book or a cocktail around tranquil pools of water or under tall swaying palms. There are only two reasons to get out of your lounging position of choice here, and that’s to sample the cuisine at the hotel’s four restaurants and to have a treatment at the huge spa with its own indoor pool, hammam, French Biologique Recherche facials and marocMaroc products for body treatments.

Popular with locals, the restaurants are of an eclectic mix of styles, with a traditional Moroccan restaurant, a Hakkasan offshoot where contemporary Cantonese cuisine meets Japanese Izakaya style food, and the pool garden restaurant which serves big bright Mediterranean salads bursting with color and flavor served in the shade of a pergola wound with flowers. At the newest addition to the roster, Michelin-star chef Akrame Benallal’s Shirvan Café Métisse plates up dishes from all around the world like roasted cauliflower with orange blossom and tahini sauce and lamb chops roasted in harissa paste.

Take the rest and relaxation step further and ask for your meals to be prepared in your villa so you can enjoy them poolside in the outdoor living area with a full working fireplace and big white linen sofas, all organized virtually by your WhatsApp-able butler. Mandarin Oriental Marrakech, Route du Golf Royal.

Visit The Photography Museum That Takes You Back In Time

Marrakech was well-known for being couture designer Yves Saint Laurent’s muse in the sixties, inspiring him through its vibrant colors and textures and its frenetic energy, which fueled some of his most famous designs. So, it’s hardly surprising his home in the Jardin Majorelle, with its electric blue walls hugging fragrant gardens of palm trees and cactus, and the more recently opened YSL Museum down the street, are at the top of traveler checklists. However, if you delve back into the medina, away from the throngs of tourists stepping off tour buses, more peaceful cultural experiences are to be had. Tucked in a side street, the quiet House of Photography showcases a staggering collection of over 10,000 photographs that tell the story of Morocco from the 19th century onwards; there’s also a full-color film documenting life in the city circa 1957. Afterwards, visitors are invited for fresh mint tea laced with sugar up on the airy rooftop terrace that looks out across the city sizzling in the North African heat against a backdrop of the snow-capped Atlas Mountains lined up along the horizon. House of Photography, Rue Ahl Fes, 46 Rue Bin Lafnadek, Medina.

Of course, the medina is the place to shop if you have a penchant for copper lamps, hand-knotted rugs, camel leather goods and colorful tagine dishes. However, once the haggle-rush has worn off, look in at the handful of boutiques selling local handicrafts with a twist like at Anitan, one of the city’s most upscale carpet shops. While the whitewashed setting is far from the stuffy windowless carpet shops of medina basements, the rugs, a spectrum of updated tribal patterns, are all woven by hand by an all-woman collective of artisans from the Atlas. Founded by Casablanca businesswoman Faïza Lahlou, whose travels around Morocco inspired a passion for the country’s art history, she also explores the use of natural dyes in making Moroccan bath towels and ceramics, all with the aim of giving these fast-disappearing artisan traditions a second lease of life. Anitan Rugs, Rue Yves Saint Laurent.

Book A Massage In The Medina For A Shopping Pitstop

Stay true to Moroccan tradition, and spend half a day at a hammam (that’s a steam bath for the uninitiated). If, however, you find exploring the dark steamy passages of the local hammams too daunting, and you’re looking for a spot to relax and sample a legendary Moroccan massage in the medina, there’s no better place than Bliss. Hidden inside an all-white riad with leafy courtyards and flowing curtains, it feel miles away from the bustle while being right in the thick of it. The team offers reasonably priced massages and beauty treatments, yoga, and for those who want to experience staying in the medina, there are a handful of pared-back light and airy Moroccan style rooms. Bliss Riad Spa, 182 Rue Mouassine, Dar El Bacha, Medina.

You can find food hailing from all four corners of the globe nowadays in Marrakech, especially in its five-star hotels, but what ties the food scene together is the locals’ flair for flavor. You can’t come to the city without sampling its more traditional cuisine and the Amal Center, located on the outskirts of the medina in Gueliz, is possibly the best place to stop by for doing just that. A local non-profit association that supports women by providing them with training and work so they can be independent, dishes include a succulent fish tagine, salads made with local produce and couscous on Fridays. Amal Center, Rue Allal Ben Ahmed et Rue Ibn Sina, Gueliz.

Finding respite from the sun and the frenzy in the heart of the medina is easy when you know where to go. Floating above the sea of antennas and minarets, is Nomad, created by Moroccan and British restaurant entrepreneurs Kamal Laftimi and Sebastian de Gzell. The views here are reason enough to climb up and take a seat on the shaded terrace of this trendy spot. Now, they may not offer the most authentic of Moroccan cuisine in the city, but all the produce used to rustle up their take on satisfying oriental vegetarian couscous and crunchy salads, is fresh, local and usually organic, making it an ideal spot to cool off before heading back out to explore the city. Nomad, 1 Derb Aarjane, Medina.

Try The French-Moroccan Classics At This 1920s Institution

A local institution, the Grand Café de la Poste was where French expats and A-listers have been coming to mix since the twenties. Redesigned by Studio KO (also behind the YSL Museum), it’s a classic haunt where well-heeled locals and travelers kick back in leather armchairs for a night cap after dining on French staples like oysters and beef tartare as well as desserts like éclair and tarte tatin alongside more local offerings in the restaurant. Grand Café de la Poste, Angle Boulevard El Mansour Eddahbi et Avenue Imam

Go Glamping In The Desert Under A Star-Lit Sky

Less than an hour out of Marrakech it’s easy to find yourself surrounded by nothing but an expanse of golden desert and big blue skies stretched out above, truly throwing you into the wild. Drive southwest and you’ll land in the Agafay Desert where entrepreneur Pierre Yves Marais set up his Terre des Etoiles ecolodge. Guests stay in roomy tents with bouncy double beds, that open out onto their own terrace from which to sit and admire the view of sand dunes that roll all the way to the horizon carved out by the jagged peaks of the Atlas Mountains soaring up to the sky. While there is a desert-camp atmosphere here that’s perfect for helping to clear cluttered minds, there are also all the mod-cons you could want, like two natural-water pools and a delightful restaurant under a stylish wood structure that serves flavorful local cuisine. Terre des Etoiles, Desert d’Agafay.

Spend The Day At This Lakeside Restaurant Outside The City

Once you’ve done your rounds of the medina and its surrounding new part of the city, there’s also plenty to explore outside of Marrakech. Less than an hour’s drive south of the city along a road that snakes through a burnt orange desert stretching as far as the eye can see, is a small oasis known as the barrage of Lalla Takerkoust. With tables laid out on the banks of the lake is Le Relais du Lac restaurant, surrounded by leafy gardens and colorful flowers and teeming with bird life, making it the perfect spot to get a feel for more rural Morocco. Slung over tables hiding under thatched-roof huts, diners feast on local Moroccan fare or French classics, all made with local seasonal ingredients till the sun goes down. Le Relais du Lac Barrage Lalla Takerkoust, Province Al Haouz.

The Ideal Temperature For Wine Coolers

Mon Jun 13 , 2022
The ageing and storage of wine are not as difficult as they may appear. However, the most important stage of properly ageing your wine is maintaining the ideal temperature. Therefore, you must consider why you need to store wine at the right temperature, storage alternatives, the best storage temperature for […] 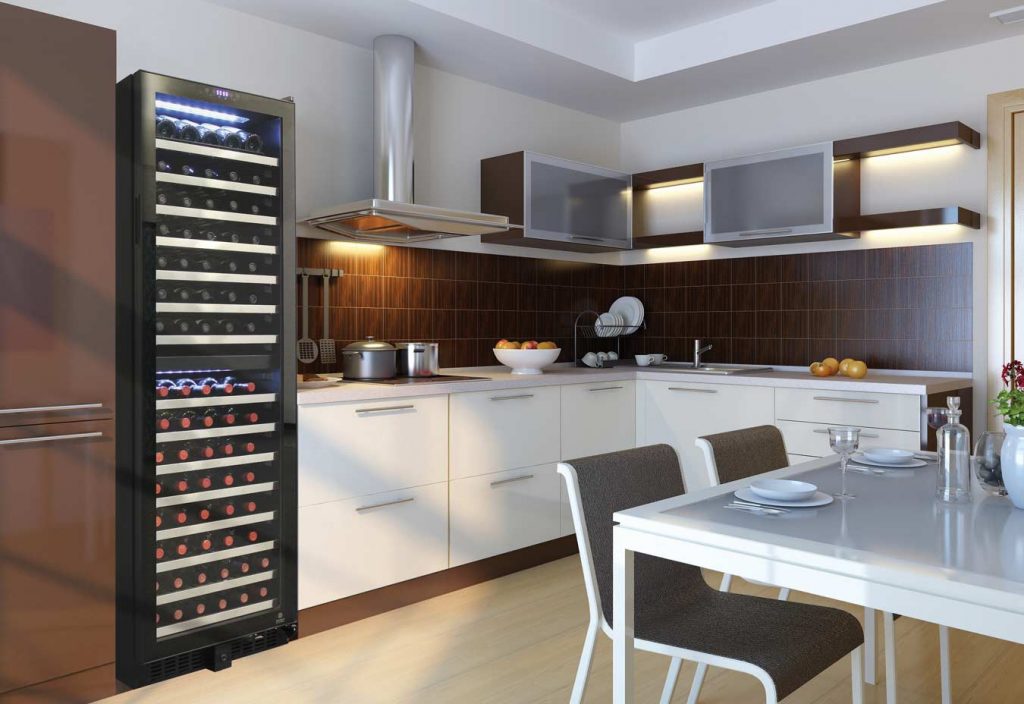