The university board of trustees voted Thursday to temporarily delay a decision on the potential Washington Commons student-housing community project after the finance and facilities committee met Wednesday.

The board agreed to revisit plans on the four-building residential community by the end of September, according to a press release issued Thursday. Associate Director of Executive Communications Ari Harris wrote that this will allow the university to focus on the “budget process and to address concerns raised by students, faculty and staff.”

University Trustee Edward Plawecki, Jr. said the decision to postpone will allow the university to pursue the most prudent path forward.

“We will continue to take in meaningful information to make an intelligent decision, which will be in the best interest of Central Michigan University,” he said.

The proposed Washington Commons project plans include 179 units of apartment-style, independent living spaces for students, located in the central campus area. During its February meeting, the board approved funding to complete the design phase on the Mount Pleasant campus.

“Students have made it clear they are interested in modern, more independent living options,” said Jennifer DeHaemers, vice president of student recruitment and retention, in February. “If we do not offer those options at CMU, they may seek them elsewhere.”

CMU President Bob Davies noted during the Thursday meeting that the university anticipates an increase in enrollment in first-time-in-any-college, transfer, and international students, as well as increases for both undergraduate and graduate students in CMU Global Campus and online programs.

Davies plans to present a balanced budget proposal to the board at its June meeting.

“Our university is strong,” he said. “It is strong because of the efforts of our faculty, staff, students, alumni, supporters and partners. We are viable, and the work taking place at our university every day is vital to our community, our state and the people we serve.”

The board also voted Thursday to move forward with previously approved projects, including demolition of Kewadin Village apartments, which is located near West Campus Drive, just off of the CMU campus.

Sun May 15 , 2022
Gawain Murray had been dreaming of building his own house from the ground up since he was 11 years old and this motivation steered him to pursue a career in construction. Murray grew up in humble beginnings with his three siblings and parents in Rockfort, Kingston. There, he learned the […] 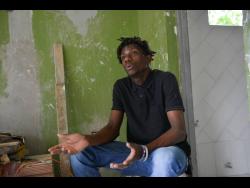