AT THE HEART of Danh Vo’s farmhouse in Brandenburg, Germany, is an oven. Not just any oven, though. This wood-burning clay furnace, the size of a Volkswagen minibus, painted a dark azure and bisecting the large living area, was one of the few things Vo knew he had to have in the house: a modern version of a traditional Russian stove, which was used for both cooking and heating. Once, these impressive pieces of masonry were the locus of the home and the inspiration for several Russian fairy tales. Many had large shelves or flat-roofed extensions, reached by small ladders and topped with mattresses. Vo’s has a platform that juts out in the rear, radiating heat, with room to seat four.

The monumental domesticity of such a piece no doubt appealed to Vo, 46, a conceptual artist who often makes new objects out of old ones, like the washer, refrigerator and TV his grandmother received from a Catholic charity upon arriving in the 1980s as a Vietnamese refugee in Germany, which Vo stacked atop one another and mounted with a wooden crucifix, refashioning them into art (“Oma Totem,” 2009). “Duchamp did stoves,” notes Vo. But the clay oven also spoke to another desire he had for this house: that it be a place where people could gather. “I love when in the winter everyone is automatically drawn to its warmth,” he says. “This is what I prefer to buy instead of a fancy car.”

Vo’s property, called Güldenhof, is a little over an hour’s drive north of Berlin, past vast rapeseed and rye fields and the tiny village from which it takes its name. It was once an East German agricultural collective, but most of its buildings had been abandoned for almost 30 years when Vo came upon it in 2016, and its uncultivated fields are now punctuated with art. In the middle of this 7.5-acre repurposed farm is a grassy football-field-size courtyard, framed on each side by a different structure, all originally built in the 1800s. Along with the gut-renovated, three-story, 7,000-square-foot farmhouse, where Vo lives, there are three long stone-and-brick buildings, formerly used to house cattle and store feed. Over the past few years, Vo has transformed the property into a cultural incubator. It’s where he invites people to make things, be they art or sauerkraut, and where he himself is always experimenting with things, too.

Vo has never really had use for a traditional studio. His groundbreaking work “We the People” (2011-16) is a life-size re-creation of the Statue of Liberty that exists not as a single object but as a series of shards of around 250 copper pieces, which Vo will never allow to be shown altogether in one place. His art often plumbs the intersections of collective history and personal history — or, as he’s called it, “the tiny diasporas of a person’s life.” Born in southern Vietnam, he and his family fled in 1979 when he was 4 aboard a hand-built wooden boat that was eventually picked up by a Danish freighter. After several months in a refugee camp in Singapore, they settled in a suburb of Copenhagen; he considers Danish his mother tongue. He has spent his adult life in many different places seemingly all at once — he has a house in Mexico City, an apartment in Berlin and a country house in Denmark. But “if people want to see Danh’s work,” the Thai conceptual artist Rirkrit Tiravanija says, “they should come to Güldenhof. In a way, what he is doing here is his practice.”

IT WAS TIRAVANIJA, Vo’s friend and mentor, who first suggested that they buy some property in the countryside, a place for them and other artists to store work, and for Tiravanija, who’s best known for interactive installations that center on communal rituals — like cooking meals or conducting tea ceremonies — to build a ceramics studio. (He spent weeks at Güldenhof last summer making pieces for the tearooms he’s set up around the world.) But Tiravanija got caught up with other projects, says Vo, so he was left to renovate the compound himself.

Vo’s longtime studio manager, Marta Lusena, enlisted the architect Pietro Balp of the Berlin-based Heim Balp Architekten, who had previously helped renovate Vo’s Berlin apartment, which he shares with his partner, the German photographer Heinz Peter Knes. But unlike that grand, art-filled Art Nouveau space, Vo didn’t want Güldenhof to feel precious or polished. Here, walls would be cement or plywood. Long metal LED grow lamps, often used to cultivate marijuana, would hang from the ceiling, because they “make such a strong, beautiful light,” says Vo. There were two initial directives for the renovation: to transform one of the barns into a functioning archive that could store everything from photographs to sculptures, and to convert the farmhouse into a proper living space that could accommodate however many guests wanted to stay there.

Today, the farmhouse’s footprint remains the same, but the exterior plaster walls have been painted matte black, the pitched roof is now corrugated metal and one accesses the space through a small greenhouse-like entrance, clad in polycarbonate. Once inside, visitors either climb the original pine staircase (to the upstairs semiprivate areas) or head toward the kitchen to the right through a small adjoining sitting room containing another clay fireplace, engineered to heat a bench at the kitchen table on the other side of the wall. The walls in the kitchen are decorated with mostly handmade tools that Vo has collected over time: a broom constructed of natural grasses and bamboo from Thailand; two straw egg baskets from South Korea given to Vo by his friend the artist Haegue Yang. Beyond the kitchen is the large living area and the blue stove.

The top two floors are dedicated to reading, working and sleeping: At least a dozen beds (the number fluctuates along with the number of guests) are scattered among the house’s small private rooms and larger lounge spaces. (Vo himself doesn’t have a designated bedroom.) A plywood stairway — “a homage,” Vo says, to Tiravanija’s farm in upstate New York, most of whose interiors are completely covered in plywood — leads through a triangular opening to the third floor, which serves as a library and sleeping area: yet another place to bed down for the night.

VO’S TRANSFORMATIVE ENERGIES extended beyond the property lines, and as Balp and his team were working on the renovation, the artist was seeking out people from the surrounding area to help reimagine Güldenhof: like Falko Martens, an engineer and artisan who makes bespoke wood-burning clay ovens; or the cabinetmaker Fred Fischer, who now has a carpentry shop in one of the old barns and made much of the furniture in the farmhouse, including the beds fashioned out of plywood. Vo calls his knack for finding such collaborators “luck,” but Tiravanija says that bringing people together is one of Vo’s great skills. Indeed, Güldenhof is always buzzing with people Vo has brought into his world. On any given day, there might be between four and 12 visitors, like Claus Meyer, one of the creators of Denmark’s New Nordic Cuisine manifesto, and the Michelin-starred chef Dalad Kambhu, discussing fish sauce and fermentation. Or Yang, who spent time at the farm learning how to make ceramics with Tiravanija. Or a group that includes Luise Faurschou, the founder of a Copenhagen-based nonprofit called Art 2030, and the Berlin-based restaurateur Oliver Prestele, helping harvest cabbage from the neighboring farm of Vo’s friends Lena Buss and Philipp Adler. “I don’t grow many vegetables anymore, because I would rather support Lena and Philipp,” says Vo. The biggest event takes place on the summer solstice, a two-day-long party that attracts more than a hundred people.

But Vo’s most important collaborator at Güldenhof might well be Christine Schulz, who moved from Berlin to Brandenburg to devote herself to gardening and beekeeping. (“She will move ladybugs from one side of the garden to the other by hand,” says Vo.) She helped transform one of the barns, topped with a transparent polycarbonate roof, into a sort of artistic greenhouse, where cup-and-saucer vines with lilac-colored flowers grow up over wooden ceiling beams, creating organic interior walls. In the summer, these “rooms” are sometimes used by visiting artists as studios.

Vo’s own work seems increasingly bound up in Güldenhof’s landscape. For a 2020 solo show at London’s White Cube gallery, he installed grasses and sage growing out of tubs illuminated by grow lights, and he is currently planning another show in which he will create a garden and a flower shop. “Eventually, I might get to the point that when a collector asks to buy a work of mine, I’ll say, ‘Grow a garden instead,’” he says.

Güldenhof has also reminded Vo that sometimes the best inspiration can be found when everything seems fallow. “For the first time, I am making a point of returning here before the winter solstice,” he says. “I have been drawn to learn how to adapt to the darkness and the coldness. I am suddenly loving being here on the darkest day of the year.” Especially when it can be spent with a few friends by the stove.

Tue Mar 15 , 2022
Everything about the iPhone SE is designed for the next few years except for one very important component: the screen. More specifically, the thick bezels that border the 4.7-inch LCD on the top and bottom. It’s a tired design straight out of 2017 that makes an already-small screen feel even […] 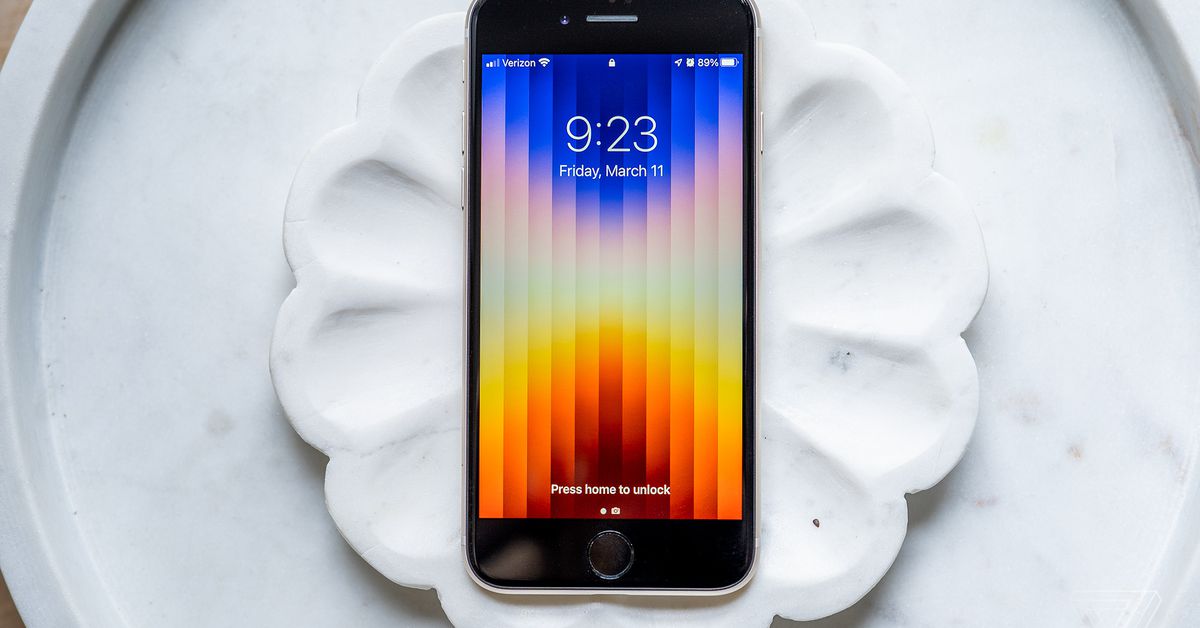