The Super Bowl is next week, and I hear that a local team is going, but really, I’m just here for the commercials and this succulent guide to dips. I’m Carolina A. Miranda, arts and urban design columnist at the Los Angeles Times, with the week’s essential arts news:

The treachery of images

It is only February, but 2022 is already knee-deep in rich-people-really-need-to-pay-more-taxes stories. In the Dutch city of Rotterdam, there has been talk of dismantling a historic bridge that dates back to 1878 so that Jeff Bezos’ new superyacht can sail through. In New York, artist Niclas Castello installed a sculpture of a cube made from 410 pounds of solid gold. (Naturally, it’s tied to an NFT drop and a new digital currency.) And here on the Best Coast, we had the arrival of a resplendent feature on Gwyneth Paltrow’s new Montecito home in Architectural Digest, which set art and design Twitter alight.

There was certainly plenty to ogle: the $63,000 Jim Zivic hammock, the $45,000 Lindsey Adelman chandelier, the mysteriously proportioned pink onyx bar that the movers seem to have abandoned on one side of the living room. But what really sparked the internet was an image of Paltrow in a halter dress, casually draped over her couch next to what appeared to be a woven wire sculpture by Ruth Asawa.

To be on Twitter at the moment this landed was like cycling through the 12 stages of grief virtually, at very high speed.

First, there was rage. “I’m irrationally angry that Gwyneth has a Ruth Asawa,” tweeted design critic Alexandra Lange. “I share this emotion!” co-signed fellow critic Allison Arieff. This sentiment was then followed by grudging acceptance — and an intense critique of the sculpture’s awkward placement (between a couch and a window).

The conversation then turned to the question of how exactly Paltrow acquired a piece by Asawa. Paltrow has the means, but there isn’t exactly a surfeit of work on the market by the artist, who died in 2013. Her large-scale, labor-intensive woven pieces appear at auction sporadically. When an untitled 6½-foot piece — a looping, lobed protuberance that dangles from the ceiling — was auctioned at Christie’s in 2020, bidding climbed to $5.4 million, which was above the high estimate.

So where did Paltrow’s Asawa come from?

The answer: It’s not an Asawa. It’s by Los Angeles artist D’lisa Creager, whose work looks very, very much like Asawa’s — uncomfortably so — forcing Architectural Digest to spend Wednesday updating images and captions and later add a correction to the story.

Plus, the sculpture in question may not even belong to Paltrow. Home design shoots are often heavily styled and feature objects that don’t belong to the homeowner. The article features a styling byline for Colin King, and the credits for the related video list the sculpture as “courtesy of D’lisa Creager Sculpture,” which would imply that the object was on loan — whether to Paltrow or King or the interior designer (Romanek Design Studio) is unclear. A spokesperson for Architectural Digest predictably stated: “We’re not commenting.”

It is worth noting that this isn’t the first time an unidentified Asawa-esque piece has materialized in an interior design shoot related to Paltrow. A similar sculpture appeared in a story about the design of Goop’s headquarters in Architectural Digest in 2017.

Dumping on Paltrow can seem almost too easy — a knee-jerk reaction by a snooty art world that doesn’t want Gwyneth to have nice things. After all, why am I not talking about the Architectural Digest stories devoted to Kathy Hilton’s overstuffed Christmas trees or Drake’s penchant for starburst chandeliers?

But Paltrow often brings it upon herself. Through her wellness company, Goop, she has cultivated a brand inspired by the idea of empowerment. Turning 40 is empowering. Being yourself is empowering. A $75 candle called “This Smells Like My Vagina” is empowering. Naturally, she is happy to help your empowerment along by plying you with questionable merch. (In 2018, Goop had to pay $145,000 in civil penalties to settle a lawsuit brought in 10 California counties over unsubstantiated claims related to jade and quartz vaginal eggs that purportedly helped women balance their hormones and regulate their menstrual cycles.)

What’s not empowering is overwriting the work of one artist — a woman of color, no less — with that of another in your glossy home spread.

Born to Japanese immigrants in Norwalk, Asawa spent her teen years in internment camps. She studied to become an art teacher but was denied a teaching certificate because of her ethnicity. She ultimately ended up at Black Mountain College, where she studied under the likes of Josef Albers; stints in Mexico inspired her forays into weaving with wire, a technique she used to create a singular body of work.

For a time, Asawa was successful, showing her work in New York galleries. But she had to reckon with being a woman in a male-dominated art world; at times, her work was dismissed as craft. She and her family would ultimately settle in San Francisco, where she became a beloved public artist, educator and activist. In the wake of her death, her work has experienced an incredible resurgence — materializing regularly in museum exhibitions, including the upcoming 59th Venice Biennale. In 2020, she was honored with her own U.S. stamp.

Creager did not respond to an email query. But in her online bio, she explains that she once took a wire looping workshop with Aiko Cuneo, Asawa’s daughter. (Though, as Sarah Cascone at Artnet notes, the family put an end to those because they were generating a rash of imitators.) On her website, Creager describes trying to “achieve new levels of intricacy and complexity in a way that visually attracts and invigorates.” If only. Her work has not evolved Asawa’s deft forms or scale.

But better than devoting another lick of internet outrage to this shelter-rag drama, my advice: Go see a real-deal Asawa in person. The De Young Museum in San Francisco, which has an extensive collection of works by the artist, has a number of pieces on view, and here in Los Angeles, the Museum of Contemporary Art currently has a 1955 Asawa sculpture hanging in the permanent collection galleries at Grand Avenue. And I can promise that these are much — much — better settings than Paltrow’s overwrought living room.

While you’re at it, don’t miss the KCET “Artbound” doc “Masters of Modern Design,” which emerged out of a story that Alexandra Lange did for Curbed — about a generation of Japanese American artists and designers whose early lives were shaped by the internment camps.

And check out this online tour of Asawa’s public art.

In the wake of two programs devoted to the work of Duke Ellington, Times classical music critic Mark Swed has a fascinating piece on an underinvestigated aspect of the composer’s legacy: his experimentations with “hybrid in-between” compositions that invited the symphonic world into jazz. Part of the challenge in presenting some of these works, such as his 45-minute suite “Black, Brown and Beige,” has been finding orchestras that can tackle all of their elements. “If Ellington is to retain his importance to American music,” writes Swed, “then improvisation needs to be taught as a standard skill for orchestral players.”

Times opinion columnist Nicholas Goldberg writes about the performance of a John Cage composition for organ that is scheduled to last for 639 years. Here’s hoping for an intermission.

On and off the stage

Ashley Lee follows up on the Williamstown Theatre Festival, which announced numerous changes to its operations this week as a result of her investigation into the work culture there. One of the big shifts: The festival is scrapping its ambitious seven-show summer season, which was at the root of many workplace problems. “This will lessen the intensity and sense of urgency once endemic to WTF’s workplace,” read a statement on Williamstown’s website.

Enjoying this newsletter? Consider subscribing to the Los Angeles Times

Your support helps us deliver the news that matters most. Become a subscriber.

Charles McNulty has been chasing some offstage drama — on the tennis court. Namely, the Australian Open, which featured the global theater of Novak Djokovic’s vaccine refusal and the bureaucratic nightmare that ensued, as well as the rise of Rafael Nadal, who took home the title through sheer grit and determination, and the humble Ashleigh Barty, who also had a hard-fought win. “Character, for all the right reasons,” writes McNulty, “was destiny at this year’s Australian Open.”

Matt Cooper has rounded up what’s doing at museums and galleries, including a show of work by Nicolas Poussin at the Getty Center in L.A. and a celebration of the late Wayne Thiebaud at the Laguna Art Museum. Plus, it’s time to update the inventory: Frieze Week kicks off on Feb. 14. (On a side note: How did we all end up calling this Frieze Week? They’ve only been in town for a few years, and they get a whole week named after them? This town is a sucker for European gloss.)

Related: Frieze has canceled its public sculpture exhibition due to COVID-related delays.

Cooper also has the nine best bets for the weekend, including a Chinese New Year Festival at the Huntington Library and a performance by pianist Yefim Bronfman with the L.A. Phil at Disney Hall.

David Gordon, a choreographer and director who was a founding member of the experimental Judson Dance Theater, is dead at 85.

Donald Mahler, a prolific choreographer who worked with the Metropolitan Opera and was director of his own dance troupe, has died at 88.

Manfred Thierry Mugler, a French fashion designer known for flamboyant, downright architectural designs that seemed to turn their wearers into sci-fi creatures, has died at 73.

Architect Hilario Candela, the Cuban-born Modernist behind the dramatic Miami Marine Stadium, has died at 87.

— Call me highly intrigued by the topic of apotheosis.
— I am so ready to road-trip to Lubbock to visit Robert Bruno’s Steel House.
— When not lurking around weird houses, I’ve been entertaining myself late at night by watching videos of the haute couture shows in Paris. I dug Chanel’s PoMo-ish set (even if the fashion was generally meh).
— Plans were revealed for Theaster Gates’ design for the Serpentine Pavilion in London: “Black Chapel” will feature a salvaged church bell in a wooden structure designed to resemble an industrial kiln.
— Also revealed: the very long artist lineup for the Venice Biennale, which will include L.A. artists such as Barbara Kruger, Candice Lin and the late Noah Davis.
— The art world has all the transparency of squid ink: Damien Hirst’s $100-million skull? It never really sold.
— John Berger’s “Ways of Seeing” has turned 50.
— Tyler Green has an interesting convo with L.A. artist Eamon Ore-Giron about music, monuments, color and form on “Modern Art Notes.”
— Jorge Zamanillo has been named the first permanent director of the Smithsonian’s Museum of the American Latino.
— President Biden has rescinded an executive order put in place by his predecessor that put restrictions on the aesthetics of public art.
— The University of San Francisco and the San Francisco Art Institute have signed a letter of intent exploring USF’s acquisition and integration of SFAI’s programs into its own.
— A reporter for Variety was removed from the red carpet at “MJ the Musical” in New York for asking performers about the sexual abuse allegations against Michael Jackson.
— A new show by the Alvin Ailey American Dance Theater has captured “the look of 2021,” writes Washington Post dance critic Sarah L. Kaufman.

And last but not least …

I am here for the viral Renaissance mouth meme on TikTok.

Sun Feb 6 , 2022
When Allan Smith and Chanda Woodworth got evicted from their rent-subsidized apartment, it began a long journey of living in hotels and eventually on the street before settling into a new tiny home community. The journey there wasn’t easy. “Our blankets and pillows would get wet,” she said in an interview […] 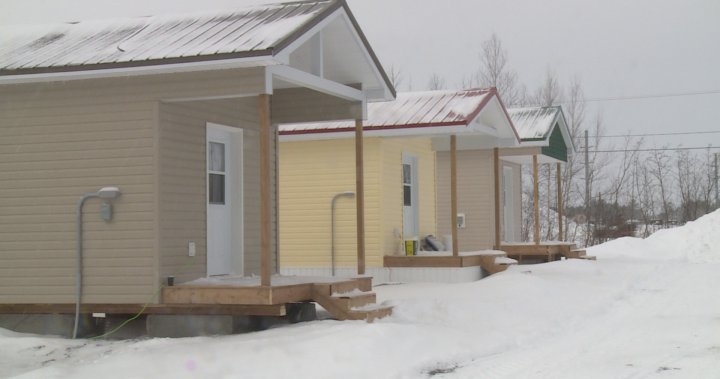