Whether you call them Space Age or Atomic Age, the homes built in the 1950s and 1960s by architect John Lautner and others represented a new wave of modern architecture inspired by space exploration and futuristic ideas.

In the mid-20th century, astronauts were as glamorous as movie stars, while TV shows such as The Jetsons and films like 2001: A Space Odyssey invented worlds with homes that resembled planets and spaceships. Now that space travel for the layman is becoming a reality, we can expect to see architects and designers gathering inspiration from the new boom and from advancements in materials and technology.

“Design evolves in the context of culture,” says Bidisha Sinha, associate director at Zaha Hadid Architects in London. “Architectural movements influence each other. Space Age design was influenced by popular culture and the technology that allowed for things like plastic-injected furniture. Atomic Age architecture was based on the understanding that protons and neutrons are the components of something larger—just like you take building blocks and the sum becomes larger than the individual components.”

Those trends were considered ahead of their time and remain appreciated for fluid and energetic designs that are still relevant to today’s architectural styles, Ms. Sinha says.

Technological improvements have made futuristic architecture easier to build. Even though we don’t all live in spaceships like the Jetsons, contemporary residences use elements of those earlier homes, such as curved walls, floor-to-ceiling glass, and ever more sci-fi-like smart-home controls.

“Popular culture always influences architecture,” says Michele Grace Hottel, founder of Michele Grace Hottel Architects in La Mesa, California. “The renewed interest in space and technology and futurism is something people address in the space they live in, in the form of design. Things like open spaces, connection to the natural site, and big expanses of glass are elements of Space Age architecture that resonate with people today, too.”

In 1960, John Lautner’s “Chemosphere” house in Los Angeles, an octagonal residence that sits on a concrete column, was considered the epitome of modern design. Similarly, his 1968 “Elrod House” in Palm Springs features a UFO-like circular concrete canopy above the living room, and curved-glass walls. In both examples, Lautner incorporated natural elements from the site into his design, such as large rocks that are part of the interior of Elrod House.

“Space Age architecture was part of a postwar modernist phase of American optimism in the 1950s and 1960s,” says Jacqueline Gonzalez Touzet, who lives in a 1950s Space Age house with her husband, Carlos Prio-Touzet, in Coral Gables, Florida. Both are architects and principals of Touzet Studio, whose work is influenced by that era. “Unlike Europe, where the focus was on rebuilding after the war, American architects were part of a ‘can-do’ moment based on an economic boom and excitement over new technology.”

The spirit of the 1950s and ’60s, says Ms. Touzet, was all about the future and leaving the past and wars behind. It sounded like a fantasy then, but space travel for civilians was part of the idealized future. Now that billionaires and public figures, from Jeff Bezos and Richard Branson to William Shatner and Michael Strahan, have shown that space travel for nonastronauts is possible, a reinvigorated interest in the universe beyond Earth may inspire fresh interest in futuristic architecture, experts say.

“Everything associated with Space Age design, like clean lines, holistic design, technology, modern materials, and pop culture, continues to be relevant today,” Ms. Sinha says. “These factors carry on and evolve. For example, 3-D printing and experimenting with new materials…are similar to the experimentation with injection molding and plastic furniture in the 1960s.”

Some elements of residential modernist architecture of the 1950s and 1960s hold up well and match today’s appreciation of glass walls, indoor-outdoor connection, and an abundance of open space.

“We’re especially drawn to playful modernism, and so are our baby boomer clients who grew up in the 1950s and 1960s,” Ms. Touzet says. “Back then, technology was viewed as a pathway to living a better life, and that attitude is strong today, too.”

Space Age design features, such as floating staircases and cantilevered overhangs to create shade, were “amazing feats of engineering and inventiveness,” Ms. Touzet says. Today’s architects are taking those cutting-edge styles and adapting them to new homes.

Residential architecture from renowned firm Zaha Hadid Architects doesn’t strictly reference Space Age design, Ms. Sinha says, but it shares a futuristic aesthetic along with some of the principles of 1950s modernism.

“At the One Thousand Museum condos in Miami and at 520 West 28th St. condos in New York, we designed the exteriors and the interiors with fluid, malleable lines that carry throughout the buildings,” Ms. Sinha says.

Both buildings have outdoor spaces and curving exteriors that resemble the shapes of early imaginings of spaceships. A private residence designed by Zaha Hadid Architects in Moscow’s Capital Hill neighborhood could be part of a Star Wars movie.

An important element of modern architecture and the Zaha Hadid aesthetic is biomorphic design, which uses organic shapes found in nature to inform residential structures similar to Lautner’s curving residences.

A house designed by Touzet Studio in Miami in 2019 features a floating roof reminiscent of Lautner’s work.

“La Escondida house has an organic composition that’s open to the vines and trees, plus it’s elevated to capture breezes and cross-ventilation,” Ms. Touzet says of the Miami residence. “The house has walls of floor-to-ceiling glass, like many of the Space Age designs from the 1950s and 1960s.”

Similarly, a Coral Gables house designed by Touzet Studio in 2012 includes a floating roof, clerestory windows, terrazzo floors, and operable glass walls across the back of the house.

Another Touzet Studio custom home in Miami appears as a set of open boxes floating above the adjacent waterway.

While the 1950s and 1960s Space Age designs included expanses of floor-to-ceiling glass, the technology available today means those walls can be easily opened to increase indoor-outdoor connectivity.

“Now we can use remote control to operate the big walls of glass, and we have better weatherproofing available, too,” Ms. Hottel says. “But some of the materials in Space Age homes, such as pound-in-place concrete, can be hard to use to meet today’s building codes.”

Rather than using concrete or plastic, architects today use 3-D printing and some prefabrication elements for a seamless, fluid appearance, Ms. Sinha says. Prefabrication can sometimes be a less-expensive construction method and typically speeds up construction time.

“Today we need to do more with less because of the risks from climate change and flooding,” Ms. Touzet says. “Concrete is one of the most carbon-intense building materials, so we’re using and reusing other materials in place of it.”

Mixing glass or seawater in concrete can reduce both the amount of concrete used and the carbon needed to produce it, Ms. Touzet says.

“Space Age architecture can be more costly to build and require more land for some of the wide, expansive spaces,” Ms. Hottel says.

Architectural styles come and go, but concerns about performance and health are here to stay, Ms. Touzet says.

“The connections to a site, to nature and to indoor-and-outdoor living, were part of the first Space Age architecture and are important today, too,” Ms. Touzet says. “The difference is that people are less interested in finicky materials that don’t last. Now we want resilient, long-lasting homes that offer protection from the elements—along with modern, futuristic style.”

Space Age–style homes can be found around the globe, although they are more common in areas of Southern California, Arizona, and Florida that embrace futuristic design.

“There are certain locations that lend themselves to Space Age architecture, such as desert terrain that looks like you’re on the surface of the moon or on another planet,” Ms. Hottel says.

When the late comedian Bob Hope first saw Lautner’s design for his Palm Springs home in 1969, he reportedly said, “Well, at least when they come down from Mars they’ll know where to go.”

Homes that seem to float above water or earth with remote-controlled glass walls embody the fun and futuristic feeling of Space Age–style homes.

“The idea of Space Age design was to be innovative and embody the spirit of conquering new things,” Ms. Sinha says. “While technology has been demystified in many ways since then, that spirit is still relevant.”

This article first appeared in the Spring 2022 issue of Mansion Global Experience Luxury.

This Branford artist once worked in a high-tech industry. Now he uses a loom designed 400 years ago

Tue Mar 8 , 2022
BRANFORD — Textile artist Robert Aiudi could come from another century, he jokes. Maybe he’s channeling his great-grandfather, a master silk weaver in Italy over 100 years ago, he says. After all, Aiudi pursues a craft that’s hundreds of years old. Aiudi can often be found weaving cozy winter scarves […] 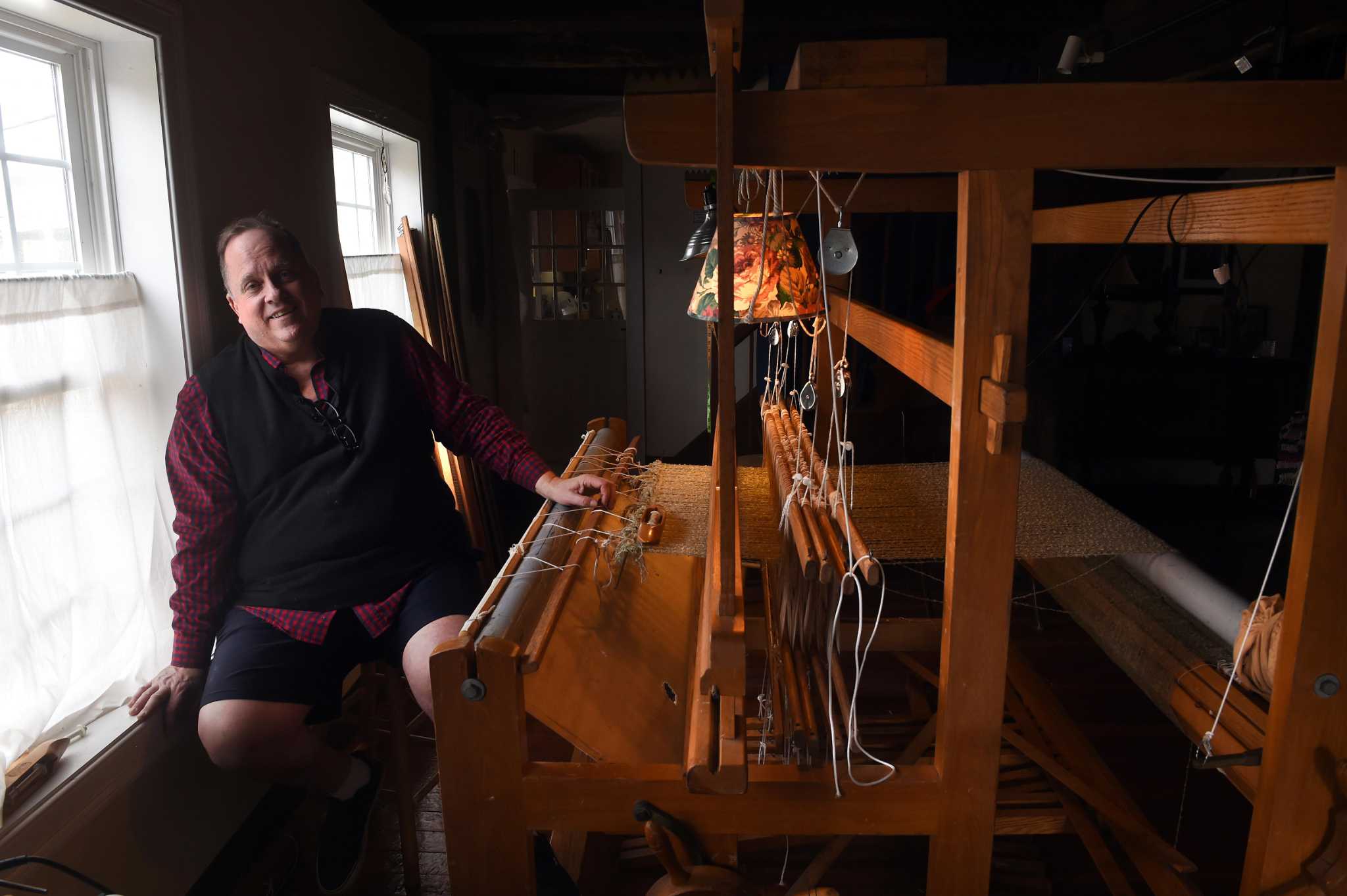