BRANFORD — Textile artist Robert Aiudi could come from another century, he jokes.

Maybe he’s channeling his great-grandfather, a master silk weaver in Italy over 100 years ago, he says. After all, Aiudi pursues a craft that’s hundreds of years old.

Aiudi can often be found weaving cozy winter scarves at his bulky, old-fashioned loom in the great room of his home on East Main Street. He’ll probably be wrapped up in one of his giant scarves as it’s always chilly in the drafty 1709 Colonial, he said.

With impressive-looking antique spinning wheels on display in his living room and an early loom on loan from the Branford Historical Society, the house looks like a museum of sorts. Sloping wide-board floors, cavernous fireplaces and off plumb woodwork and walls add to the character.

For his work, the weaver uses a relatively modern (albeit massive) wooden loom — built in 1985 — but its design hasn’t changed in the past 400 years and neither has the technique.

In fact, Aiudi repaired all the old textiles in the historical society’s collection and creates authentic Colonial table runners that he sells. He also makes patchwork quilts, which he said are “easy, easy” to complete.

A more challenging task for Aiudi is the restoration of worn tapestries and the creation of his original wall hangings.

He exhibits these unique tapestries, scarves and runners at the very contemporary-looking BACA Gallery in Branford.

Aiudi recently sold one of his signature scarves to a renowned Connecticut Italian American — U.S. Rep. Rosa DeLauro, D-3 — at a recent gallery opening. The artist was thrilled and noted that the maroon stripe in the open-weave piece complemented the DeLauro’s famously dyed purple hair.

“I never met her before,” he said, with a trace of admiration for the congresswoman. A friend of his at the gallery “made her put the scarf on and she tapped me on the shoulder.”

“I have worn it and received many compliments. I hope to add more of Bob’s scarfs to my collection,” she said in an email. “The scarf from Robert Aiudi is beautiful, and I’m proud to support a local weaver and his incredible work.”

Aiudi weaves with silk, hand-spun wool from an alpaca farm in Deep River and from white sheep in New Mexico.

He also collects odd or vintage yarns. Aiudi showed off a rare skein of antique flax from Branford from when it was a major flax producer (flax is turned into linen) and a special yarn used by the artist who created the tapestries in the North Tower in the original World Trade Center in the 1980s.

The artist noted that he does not work with skeins of yarn — which are much too small, but large cones of thread. He sets up the thread on his loom, which takes about six hours; some 30 yards, which will yield nine to 10 scarves.

Weaving, Aiudi said, brings him in touch with his family roots.

“My great grandfather was a weaver — he was from the part of Italy where they still have a very big silk industry today and it’s directly connected to Marco Polo. Marco Polo brought back Mulberry trees and silkworms and they thrived in Italy. So there’s a big silk trade in Italy.”

His grandfather was a “master silk weaver” and came from the province Le Marche “just below Venice,” Aiudi said.

Those looms are long gone, he said.

“When I started to weave I found it so weirdly attractive,” he said, and this was long before he learned of this family connection to the craft.

“A psychic told me it was generational memory,” Aiudi confided.

When Aiudi is not at his loom or teaching students in his home, he works as a speech recognition consultant, which he describes as “sort of Siri for doctors.” He specializes in foreign languages — he speaks four, he said. Before that he was an international vice president of marketing for a high-tech firm.

Despite his high-tech background, he loves the low-tech aspect of working the loom: operating the foot pedals — barefoot in the summer — and moving the shuttle back and forth, east to west. Then he beats the threads “down and tight” with a beater. Then repeats the painstaking process, again and again.

Aiudi took to spinning and weaving very early on when he lived with his family in Middletown, he said.

“The next thing you know our neighbor has a wheel — an old Colonial wheel, that I repaired when I was 10.”

This love of textiles was no passing fancy. Aiudi, who was a Boy Scout, wanted to get his textile merit badge when he was 12. Then he found a weaver in Middletown, Laurie Frenzel, who took him under her wing.

“In a year I built my first loom,” he said. “My grandmother just freaked out when she saw the loom. That really cinched it for me. It really connects me to the generations. It’s really cool.”

Aiudi studied the art further with well-known weavers at Wesleyan Potters in Middletown.

While living in New York, Aiudi was weaving in his 780-square-foot apartment and sold his wares at a well-known flea market at 81st Street and Amsterdam.

He moved to Branford five years ago to be closer to his family — his mother, Dorothy, and his sister, who had suffered a stroke.

Here, at the John Tyler House, he found he could stretch out in the 3,800 square feet with his looms and various apparatus.

“To live in Manhattan and weave — forget it,” he said. “And so then I’ve just been weaving — it’s relaxing. It’s labor intensive and you really don’t get paid anywhere near what you should — hourly rate-wise.

Aiudi’s work is also on view in a pop-up holiday shop he hosts at his house and calls it “The Shop at the John Tyler House.”

Santha Martin, manager of the BACA Gallery, is an admirer of Aiudi’s work. She said visitors are usually taken aback when they meet the fiber artist.

“When they meet him they’re surprised he’s a weaver because of people’s preconceived notions of what a weaver looks like — whatever that is. I don’t know if it should be a tricorn hat,” she quipped.

Martin appreciates his work on view, which she sees every day at the gallery.

“His work is beautiful. It’s got a spiritual context to it. I think that’s what people pick up for the most part — especially his larger pieces,” she said.

Side by side, the tapestries are very different from one another. One is an interesting take on a traditional Navaho blanket, with fluffy white fibers that seem to float against the background like clouds. The other, he devoted to his late sister, Susan, who died in 2018.

The personal piece has “the brightest colors you could possibly imagine — orange and blue, pink and purple, black and white and multi-colors — a tribute to his sister’s life who lived a beautiful, colorful life,” Martin said.

His scarves in the gallery seem ethereal with their airy, open weave and subtle hues — many soft grays accented by a colorful stripe.

“He makes these scarves that look so cozy,” Martin said.

Aiudi has his fans in town. Friend Lisa Arpin, the Branford town clerk, said she loves to see his process. She also helps him set up at shows.

Tue Mar 8 , 2022
MYKOLAIV, Ukraine — Increasingly indiscriminate Russian shelling that has trapped and traumatized Ukrainian civilians magnified fears on Monday of an intensifying humanitarian crisis that has already left tens of thousands without food, water, power or heat in besieged cities of southern Ukraine and elsewhere. As hopes for even brief cease-fires […] 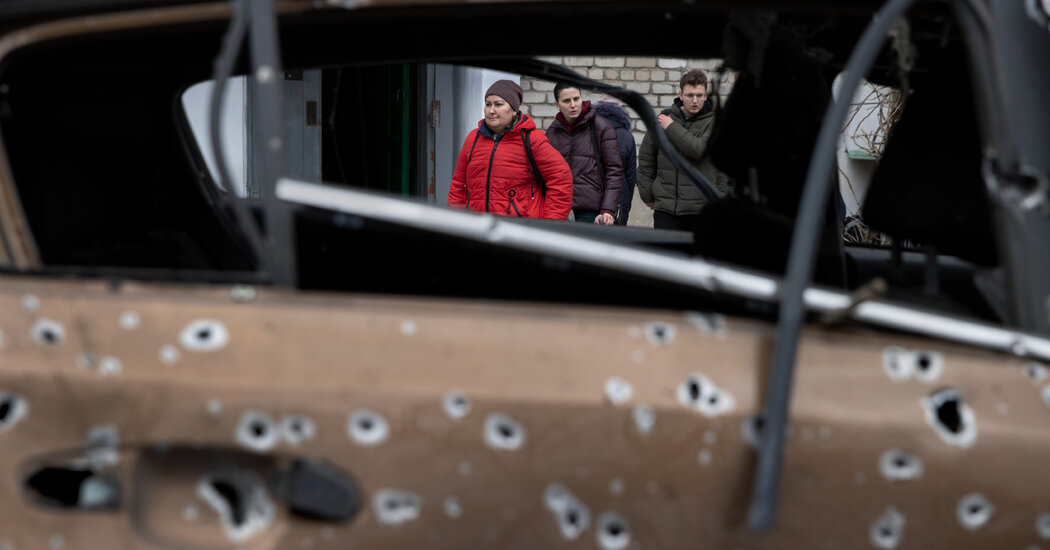