MADISON — Construction is going at a hectic pace at the General’s Residences at Fence Creek, but it’s barely keeping up with home sales, with million-dollar homes selling faster than they are finished.

Seven out of nine 2,200-square-foot luxury homes on the site of the former General’s Residence have sold for $1.1 million to $1.3 million. And that’s while three units are still under construction and work at the final building has not even started, according to developer Adam Greenberg.

The last structure to be built is an “exact replica” of the original 18th century home, The General’s Residence, but on three sides. The side facing the other homes will echo their design. Madison architect Duo Dickinson calls it “the manor house,” which will contain two units.

Lots of light and views

On a recent cold, rainy day, plywood was set over frozen mud at the entry of a unit under construction. Inside, natural light flooded the space, while expansive windows offered views of marsh and the downtown streetscape.

“Wow — that’s exactly what we’re going for,” Greenberg said as he surveyed the great room. “We want people to walk in and say ‘Wow, this is a beautiful place to live,” what “beautiful craftsmanship.’”

With the cluster development, Dickinson didn’t have high hopes for extensive views of Fence Creek Salt Marsh from every home, but he was pleasantly surprised when he walked into one unit.

“Oh my God, I got it right,” enthused Dickinson as he saw the newly installed windows. “This guy [unit] is landlocked, but look,” he said, pointing to a vista of marshland. Five units have views of the salt meadow marsh, he said.

Dickinson said they planned the layout of homes in this new cluster development on the 2.5-acre site to “100 percent maximize” the views and to take advantage of “downtown living.”

“You have to make the units livable. Something that would make you feel you could live downtown and have a wonderful spacious home — even though the home was tightly circumscribed by the zoning regulations,” he said about the closeness of the homes.

“This is a village concept — a little village,” he said.

The town granted a special zoning exception to accommodate the project — nine units in seven buildings on a 2.5-acre site that includes 908 Boston Post Road and the adjoining property at 916 Boston Post Road.

Architectural details on the buildings will complement the replica historic house and other structures downtown, Dickinson said.

The homes will look like they belong in New England with “pitched roofs, trim, isolated windows,” he said. The extra long eaves, which are “not the usual developer way” of constructing modern homes, “actually casts shadows and makes lines” adding interesting design elements. The elongated eaves allow them to build the homes without gutters, which he said “are a 20th century invention.”

The demolition of the historic structure, which the town had condemned and deemed unsafe, was contentious. Many residents spoke out in opposition to the teardown, while some neighbors supported it, calling the antique house blight.

“People were terrified when we tore it down — people were really upset,” he said.

Dickinson added, “I’m one of the neighbors. It’s a direct personal investment by me. If I can do a good job here, everybody I’ve known for 37 years all around me, would feel good about it.

“I see these people at Stop & Shop all the time — I don’t want to be the guy” who’s greeted with “‘Why’d you do that?’” he said. He did add that he has received much positive feedback from people.

After a construction slowdown due to COVID last year, Dickinson is itching to get the project finished.

“We really want to get going on the main building — that building is really the linchpin of the whole property,” Dickinson said. “We want to make sure it’s done and done right.”

The historic home was practically taken down piece by piece before it was completely torn down in May 2020. All that’s left on the site of the 300-year-old structure is a low stone wall and two pillars marking the pathway to the entrance. However, original doors will be used for the new structure, as well as a few odds and ends from the interior.

During the demo process, an architectural historian cataloged items that were removed from the house and shared results with the Madison Historical Society and Madison Historic District Commission, as requested by the Planning and Zoning Commission.

Dickinson also noted that a corner of the property will be left as a field, which the developers deeded to the town in perpetuity to keep it as green space. The open land offers a visual transition to the neighborhood on East Wharf Road.

“It’s been a field forever, it will remain a field,” he said.

The project is not meant to mimic New England village, Dickinson said, “It’s not a reproduction — it’s a reinvention.”

The 1 ½ story buildings will offer “a sense of transition” visually from the copy of the 2-story historic house.

The Madison architect doesn’t want the project to simply blend in and look like it’s always been there.

“As Joe architect, I’m hoping it has a little sparkle,” Dickinson said. “It’s really old and new at the same time.”

“It’s not just how can we maximize it, put as many houses” on the property, Greenberg said. “It’s how we make the best community, it’s how we get everyone to say, ‘I’m proud to live here, I love living here and the town saying ‘what a beautiful development.’”

Fri Feb 18 , 2022
After raising their five children in a four-bedroom, center-hall Colonial on a lake in Guilford, Jessica and Bill Rowen were ready for a change. Describing themselves as “forever house hunters,” they were always looking at properties on Long Island Sound, but also toyed with the idea of renovating their existing […] 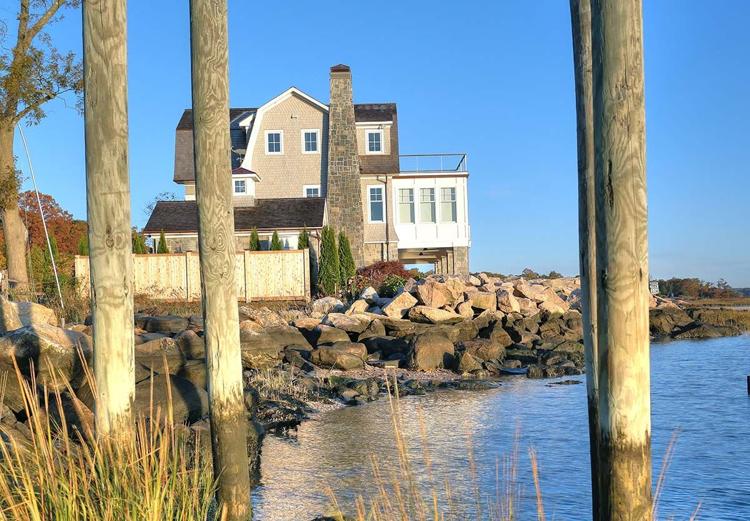