For nearly 70 years the Winter Show — formerly the Winter Antiques Show — has been raising money for the East Side House Settlement in the Bronx. This year, a late Covid surge pushed it from January to April and knocked it out of its usual home in the Park Avenue Armory (where it will return next year) to a one-time-only residence at the former Barneys building on Madison Avenue.

So instead of approaching it gallery by gallery, I relished my chance to encounter unusual objects rarely available to public view, like these 13 — listed from the first booth on the fifth floor (5-01) back down to the lobby.

1. First up is a wooden Punu mask from Gabon (Tambaran, 5-01) with sharp features, a diamond of ritual scarification on the forehead, and hair dressed in two round blades that recall the Sydney Opera House. Though its face was originally painted white with kaolin, enough color has worn away to leave it with the look of an actor sweating through her makeup — a perfect balance of delicacy and passion.

2-3. English sculptor Henry Moore’s insect-like bronze “Working Model for Thin Reclining Figure” (Bowman Sculpture, 5-08) seems to be lying in every direction at once, with legs horizontal, upper body vertical, and a protruding rectangular belly button. Behind it, also in bronze, is a family of what look like enormous paper dolls come to solid, sensuous life, with elegant faces traced into their flat heads, by the Russian artist/sculptor Ossip Zadkine (1888–1967).

4. When they bought this 19th-century Tiffany coffee pot in chased silver and delicate floral champlevé enamel, it had been polished to a high shine. But after finding a review of its debut at the 1893 Columbian Exposition that referred to the “subdued tone of oxidized silver,” the dealers S.J. Shrubsole (5-11) used “liver of sulfur” to return the pot to a smoky gray.

5. Some may prefer the dewy blush of Edouard Vuillard’s roses in this booth (Richard Green, 5-13), or the pinkish haze hovering around a landscape by Pierre Bonnard. But neither quite seizes you by the collar like the thick black outlines and arrested perspective Suzanne Valadon used in her 1932 painting “Bouquet de Fleurs sur une Petite Table.”

6. The intricate wooden carving on this 19th-century Austrian hunting horn (Peter Finer, 5-14) shows the medieval trickster hero Reynard the Fox on the gallows. Though more than a dozen anthropomorphic animals are crammed onto a horn less than 9 inches high, their histrionic expressions are all perfectly clear, from Reynard’s guile to the lion’s slightly stupid outrage.

7. To serve wild boar in style in 18th-century Holland, you would have needed a stunning faience boar’s head terrine (Michele Beiny, 5-15) like this one, with delicately painted tufts of purplish-black fur, resigned eyes, and a cranium that lifts off when it’s dinner time.

8. This gorgeous blue and white baluster-shaped flower pot, ca. 1680 (Aronson of Amsterdam, 4-01), is one of only two known examples of the type from its manufacturer. Be sure to look under the bouquet: each flower rests in its own separate hole.

9. In the early 1820s, an English silver firm called Rundell and Bridge cast five editions of a “Shield of Achilles” designed by John Flaxman. Each three-foot gilt silver platter had lines of shepherds, warriors, cattle and lions crowding around a rim, while Apollo himself raced out of the center in a four-horse chariot. One shield, purchased by George IV in 1821, has been a centerpiece of English coronations for nearly 200 years; this one (Koopman Rare Art, 4-03) belonged to the King of Hanover.

10. The pre-Raphaelite painter John Brett’s 1859 portrait of his brother Arthur (Lowell Libson & Johnny Yarker, Ltd., 4-08) is remarkable for the vivid specificity of its textures. The loose flop of the younger Brett’s bow tie, the starchy white surface of his shirt, the fluffiness of his gingery hair and the reflective sheen of moisture on his lazy left eye are all uncannily vivid.

11. In a booth stocked with Wyeth, Man Ray, and Cassatt, it’s John Singer Sargent’s 1882 “Portrait of Henri Lefort” (Adelson Galleries, Inc., 4-18) that wins the day with its unusually loose background, Lefort’s direct gaze and the sharp jabs of red Sargent laid into his signature and the bridge of his subject’s nose.

12. A beautiful midcentury necklace (Macklowe Gallery, Ltd., 4-20) with diamond-centered florets of green peridots and colored citrines of cognac and yellow comes with a matching bracelet.

13. Before the rug dealer Peter Pap (Peter Pap Oriental Rugs, 1-03) rediscovered Frida Hansen’s “Southward” in Maine last year, the majestic tapestry, on which 10 red-headed maidens ride swans across a very stylized, Japanese-looking sea, hadn’t been seen since a 1931 appearance at the Brooklyn Museum.

Sun Apr 3 , 2022
Behold: The priciest pad in Idaho.  This lakeside mansion outside Ketchum has just made Idaho history as the most expensive listing the state has on the market.  This lodge-style home is asking $19.75 million to own its 276 acres, a price tag that no other Gem State property has ever […] 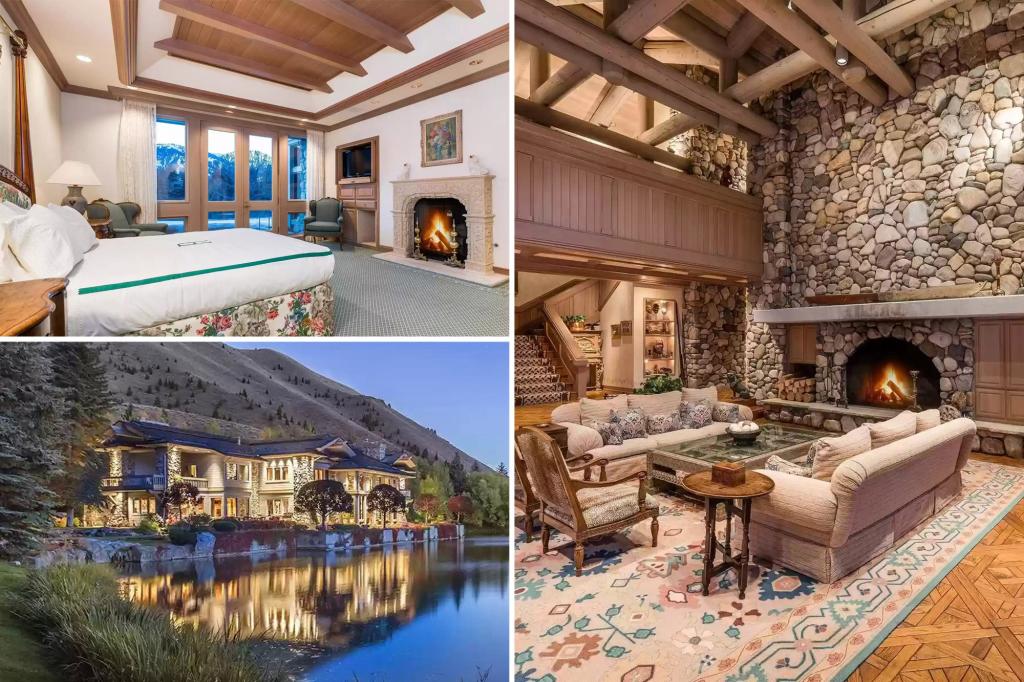