It may seem like a fantasy to live in a charming, old-world home on a former carriage lane located steps from the crush of a bustling uptown Manhattan neighborhood — and for years, it was.

But Sylvan Terrace in Washington Heights, which has long been known as a “secret street,” has gradually opened its arms even wider to prospective residents.

This week, another yellow-painted wooden home with emerald green shutters — one of 20 three-story townhouses which share that exact façade design — hit the market, asking for $1.75 million, The Post has learned. Located at 16 Sylvan Terrace, it joins No. 7 Sylvan Terrace, which listed in March as a rental for $6,500 per month.

These opportunities, for those who can afford them, continue a streak of greater listings along the coveted cobblestone lane, which was developed in 1882 for working-class housing and leads to the 1765-built Morris-Jumel Mansion — Manhattan’s oldest house. At roughly this time last year, one home listed for sale and two for rent.

Moreover, they also come at a time of greater sales. Between 2018 and 2021, only four homes sold on Sylvan Terrace, according to city records. But from 2021 to so far in 2022, the records also show, four more homes there have traded hands — doubling the number of sales in just a fraction of the time.

The reasons for selling vary, according to Douglas Elliman’s Assad Masri, who represents 16 Sylvan Terrace alongside Adam Solomon and has done several deals along the lane. Some residents have moved away from the city, while the owner of this home — who records show bought it for $1.56 million in 2017 — is an empty nester looking for her next place.

“Sometimes things just happen in clusters,” he told The Post. “There’s just no rhyme or reason for it.”

But that doesn’t mean residents are eager to flee. For decades, Sylvan Terrace has seen generations of children play together outside, residents still stay involved with beautification efforts — and it has even hosted block parties.

“There’s a community there of people that really care,” added Masri.

But the new sales listing at No. 16 also has its charm. Configured as a three-bedroom property, with potential for a fourth, the home features double-entry doors that lead to a parlor with Brazilian cherry wood floors, crown moldings, a fireplace and double-height windows with views of the street. There’s another fireplace in a great room located off the kitchen on the garden level, which leads outside to a patio with room for grilling and seating.

The primary bedroom, converted from a formal dining room, has oak French doors — and can be converted back to its original use, if need be. A winding staircase leads upstairs to the other bedrooms, as well as a guest room that can also be used as an office or a nursery.

There are two bathrooms, a total of three gas fireplaces surrounded by exposed brick, ceilings 11 feet high on the parlor and second floors and a vented washer/dryer.

More than a rare listing, it’s a rare atmosphere.

“It feels like you’re transported into a different time and a different place,” said Masri of Sylvan Terrace. “It’s very fairy tale-y, it’s very Disneyesque, and I think that has its appeal.” 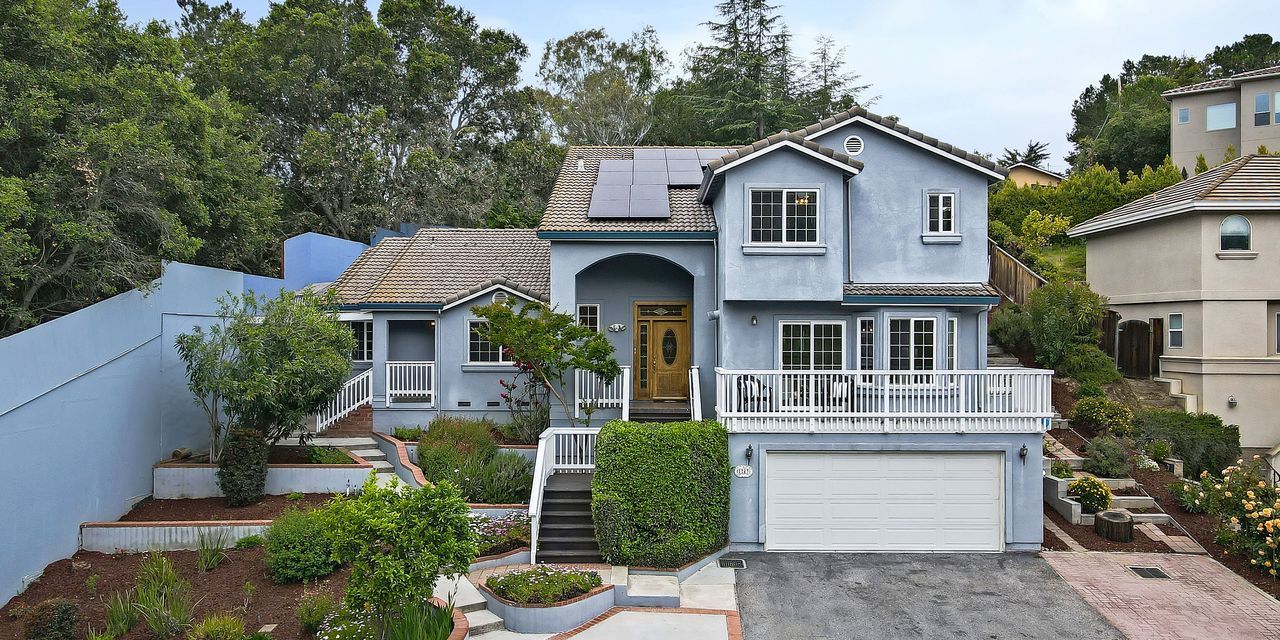