In the back of his mind, Gilbert Garcia had been dreaming about a different house. He wasn’t exactly sure what or even where it would be, but he knew it wasn’t the house that he and wife, DeeDee, were raising their four children in.

In the aftermath of Hurricane Harvey, plenty of lots were cleared or put up for sale in his Braeswood Place neighborhood. When he saw two prime lots on a cul de sac backing up to Karl Young Park, Garcia knew the time had come to convince his wife to build their dream home.

“We lived on the same street on the other side of Stella Link since 2002. It’s the house where our children were born and grew up, and there were a lot of memories in those walls,” said Garcia, 58 and the managing partner of Garcia Hamilton, the second largest fixed-income asset management firm in Houston and the largest minority-owned firm of its kind in the country. “Our house before was nice, but it was smaller and wasn’t custom and I felt like the other houses on the street had the same general floor plan.”

Large glass windows, flat roofs and modern style houses were the ones he was drawn to, and when he inquired who made them, it was studioMET, a design-build firm in Houston.

Other information: MADS asks that visitors wear face masks in the tour homes.

The Garcias worked with studioMET partner and architect Yoonchul You as well as Laura Umansky and Shannon Smith at Laura U Design Collective.

Their home, which they moved into late last summer, will be one of six on the Modern Architecture + Design Society’s 2022 Modern Home Tour presented by BEC Engineers and Consultants, which returns as an in-person event on March 19 event after cancellation in 2020 and a virtual tour in 2021.

Architects and/or builders whose work is featured in the tour are Echo Custom Homes, Hollenbeck Architects, Gary R. Chandler Architecture & Interiors with Paula Fyhr Designs, LEAM Design Build and studioMET. Tickets are $15 to $40 and are available at mads.media.

When the Garcias decided to build a new home, DeeDee Garcia, 51, decided to retire from her job as an optometrist to devote her time to the project. They spent a year planning and getting permits, then built the home eight feet off the ground with a serious drainage system underneath to be in line with new city building codes.

Since their new house is on the same street as their old one, frequent visits to the site under construction were easy.

Now the Garcias sit in the backyard, enjoying the sound of laughter from children playing in a nearby park or fiddling with smart device apps that control everything from window shades to lighting, temperature and even the massive fish tanks — one is 550 gallons and the other is 950 — built into the 6,444 square-foot home.

“Everything is on an app. It’s pretty remarkable, the biggest difference (between our old and new homes) is the way electronics work. It is so modern,” Gilbert Garcia said. “I’m still learning. When I’m in doubt I ask my daughter.”

There’s an extensive backyard patio, a swimming pool and a 750-square-foot pool house with a bedroom, full bathroom, kitchen and laundry. During parties, its doors open and it serves as a bar.

In the short time the Garcias have lived in their new home they’ve had a Lamar High School Senior Cotillion, Strake Jesuit homecoming pre-dinner, pumpkin carving party for their daughter’s friends, political fund raisers, St. Thomas soccer team events and a gala donor reception for the University of Houston Bauer School of Business.

“We like to entertain. We like being the family where the soccer party’s at. Where the school event is at. We like to be that house,” Gilbert Garcia said. “Before, we would split up some in the den and some in the kitchen and it just wasn’t conducive to events. I wanted a big open floor plan with a separate area for teenagers so we can see them but not hear them.”

Outdoors, space in the backyard feels limitless. Indoors, they can seat 22 people between the island, a breakfast table extending from the end of the island and a large, live-edge dining room table, all of which are near each other.

For holidays, their extended family — including their four kids, Andrew, 30, and his wife, Melissa, Daniel, 22 and a senior at Texas A&M, Benjamin, 19 and a senior at St. Thomas High School, and Julianna, who is 15 — can gather at this home and eat in the same room.

Fully designed with construction well under way, the Garcias contacted You one day to say that they’d decided that this home would be their last, so it needed to be more accessible, considering its tall elevation. The architect quickly pivoted, finding a place to install a lift from the garage level to the first floor and an elevator from the first to the second floor.

Though built and finished amid manufacturing and shipping delays, studioMET architect and principal Shawn Gottschalk said the Garcias had fortunate timing. Big-ticket items such as kitchen appliances were ordered early enough that they avoided the long wait time and issues homeowners and contractors are dealing with today.

Still, the cost of many materials increased — lumber by 25 to 35 percent, electrical 50 to 60 percent — Gottschalk said.

For people who simply admire modern architecture, there’s plenty to look at in the tour’s six homes. For those looking for ideas for their own new construction, remodeling or even decorating projects, the homes on tour can be approached as idea houses, from which you can launch your own projects.

The Garcias, Smith and Umansky pulled out all of the stops decorating the Garcias’ house. Modern homes have less ornamentation — no fussy window trim or baseboards — so you can see how a different approach is taken to finishing and then filling each space.

Traditional furniture filled the Garcias’ prior home, and only a pair of simple, midcentury nightstands came with them — those now live in a guest bedroom.

Since DeeDee Garcia left her job she set out on a style journey.

“The whole year we were in transition with the city (planning), I was able to gather — for the love of God and Pinterest — a lot of photos of homes. That’s what Shannon and Laura went by. They looked at what I liked for everything,” DeeDee said.

This family opted to have three dining areas because of their love of entertaining and despite that only two of the couple’s four children are still home. They used three different chair styles — one in brown wood, another with blue upholstery and the third with gray leather, yet they all look good together.

The formal dining area has a more rustic live-edge table, so you’ll see how the mingling of styles can work. That’s true for their art, too, a range of modern, contemporary and more rustic southwestern styles.

“We congregate here now,” Gilbert Garcia said of the dining area, with DD noting that they used to eat in the living room in front of the TV. “It’s changed the dynamics. When you have teenagers, you don’t expect this, … but it somehow brought us closer together.”

Sat Mar 12 , 2022
Sally Schmitt, who with her husband, Don, opened the French Laundry, the now famous restaurant in the Napa Valley of California, in 1978, and in doing so helped solidify the valley as a food-and-wine destination and start a culinary movement built on seasonal local ingredients, died on Saturday at her […] 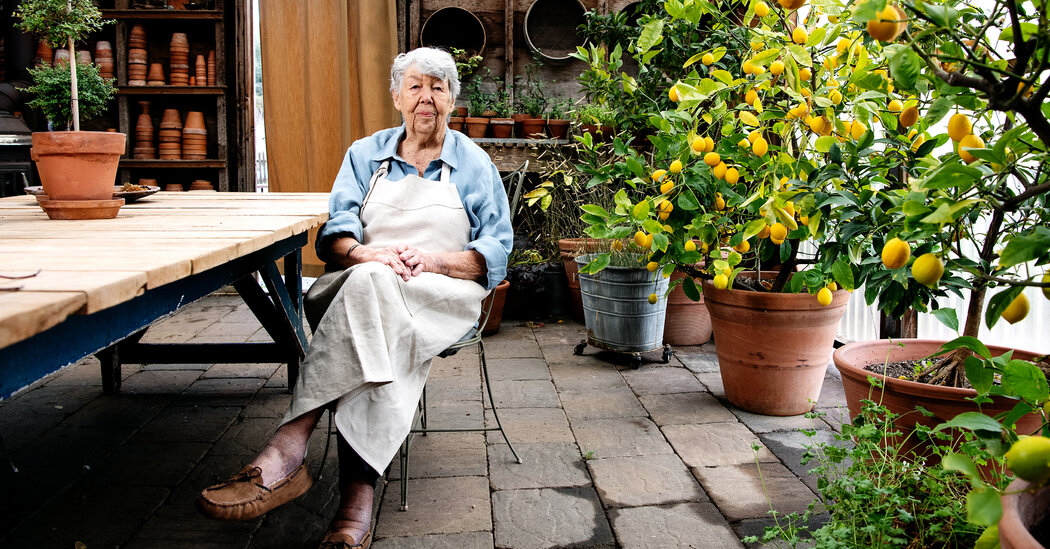