Despite its name, The River Camac which runs through Dublin’s Kilmainham and into the Liffey at Heuston Station, is more of a gentle stream. It’s certainly not known for adventure rafting.

That’s despite being not too far from George’s Dock further down the Liffey, where the City Council’s €25m plan for a white water rafting experience was recently scuppered by Government.

But when it’s the school holidays in the 1970’s (before computer games) and you’re under ten years of age, then absolutely anything is possible.

As nippers, Kilmainham-born Gerard Arthurs and his brother Michael saw the rafting potential in their back yard when others didn’t. Even if the Camac waters are more brown than white.

“Our back garden was our playground and the Camac runs along the end of it so we were always messing about in it. So we decided to build a raft made up of a big wooden palette and lots of five litre petrol containers which we tied underneath it. So we launched our raft and set off”

The small exterior of the property

The small exterior of the property

Given that the Camac runs into the Liffey nearby, which in turn runs into the sea, wasn’t there a risk of the Arthurs brothers’ rafting adventure ending up as a news story about two kids found drifting off the Irish coast?

“No. It was only a foot deep. So after we sailed along so far, we’d just get off and tow it right back again. The river was great, we’d also spend days poking about with our nets trying to catch tadpoles.”

If rafting on the Camac is unexpected, then so too is the Arthurs family home at 4 Faulkner’s Terrace in Kilmainham. It applies a whole new meaning to that old estate agent’s chestnut “deceptively spacious.” And yes, the term is deployed in its brochure.

From the road, No4 presents one door and one window, typical of the tiny Dublin artisan cottage which generally came with two small rooms, a bathroom and tiny kitchen. And maybe a postage stamp yard to put the wheelie bin out.

But open the front door at No4 and you’re looking into a vast corridor more typically found in a city villa-style home. Off this are large reception rooms, an open-plan kitchen diner, some decent sized bedrooms and that substantial back garden which will have you to straining to see the end of. All in all, the house is actually just shy of 1,100 sq ft, slightly larger than the average three-bed family semi. But with its teeny cottage face, how did that happen?

“The houses were built for millworkers and the mill was located behind the houses. My parents Gerard and Kay bought No4 before we were born in 1966 and it was pretty small,” says Gerard. “At that time the families all shared one huge garden space out back in which all the kids played together.”

“Towards the end of the sixties, most of the kids around there had grown up so people started fencing their gardens off. When I came along, ours was fenced but we still had plenty of room for football. It was magical growing up there. Given that the terrace is tucked in off the main road, we always felt safe. So people started using the garden space to extend and my parents added to the house in the 1970’s to bring it to its current size. It was completely renovated again ten years ago by my mum.”

The kitchen in No4 Faulkner’s Terrace

The kitchen in No4 Faulkner’s Terrace

Catherine ‘Kay’ Arthurs who passed away in 2020 was well known locally. “She was a wonderful woman and she always had an eye for fashion and a great sense of style. Her house was her pride and joy. Because we grew up with it, I suppose her styling of the house wasn’t as apparent to us. It’s only now that it’s for sale that we can appreciate it, from the reaction of people coming to see it.”

One aspect that will make this house appealing to couples trading down from larger homes is that it’s laid out to be used by one person (it would also suit a couple).

The deck in the back garden

The deck in the back garden

Inside the entrance hall is a bedroom to the front and there’s a living room with a large Velux window and semi -solid wood floors. In the extension at back are two further rooms one of which is currently an office the other used as a spare bedroom. There’s also the bathroom and a fairly generous kitchen and dining space that looks out to the still vast garden with a sun deck.

The River Camac runs at the end of the garden

The River Camac runs at the end of the garden

The cottages at Faulkner’s Terrace were named after Patrick Faulkner’s long gone paper mills which are listed in the 1862 Thoms Directory of Dublin as running through six adjoining lots between Mount Brown and Kilmainham
Bridge.

Close to the city centre, No4 is beside the new National Children’s Hospital and the Luas. The locale also includes The Museum of Modern Art, The Royal Hospital, Memorial Gardens, and the Phoenix Park is on its doorstep. College lecturer Gerard and his brother Michael are selling up through the Felicity Fox agency which seeks €400,000 on their behalf.

And if your kids can extract themselves from the virtual reality headsets, there’s some real adventures to be had, right there at the end of the garden.

Mon Feb 21 , 2022
Here’s the problem with talking to creative people with good taste and good ideas: Once you know what’s possible, you can’t unknow. It can drive you nuts. Which brings us to my kitchen hutch, a plain, pine, country French workhorse with open shelves and cabinet space below. We’d been living […] 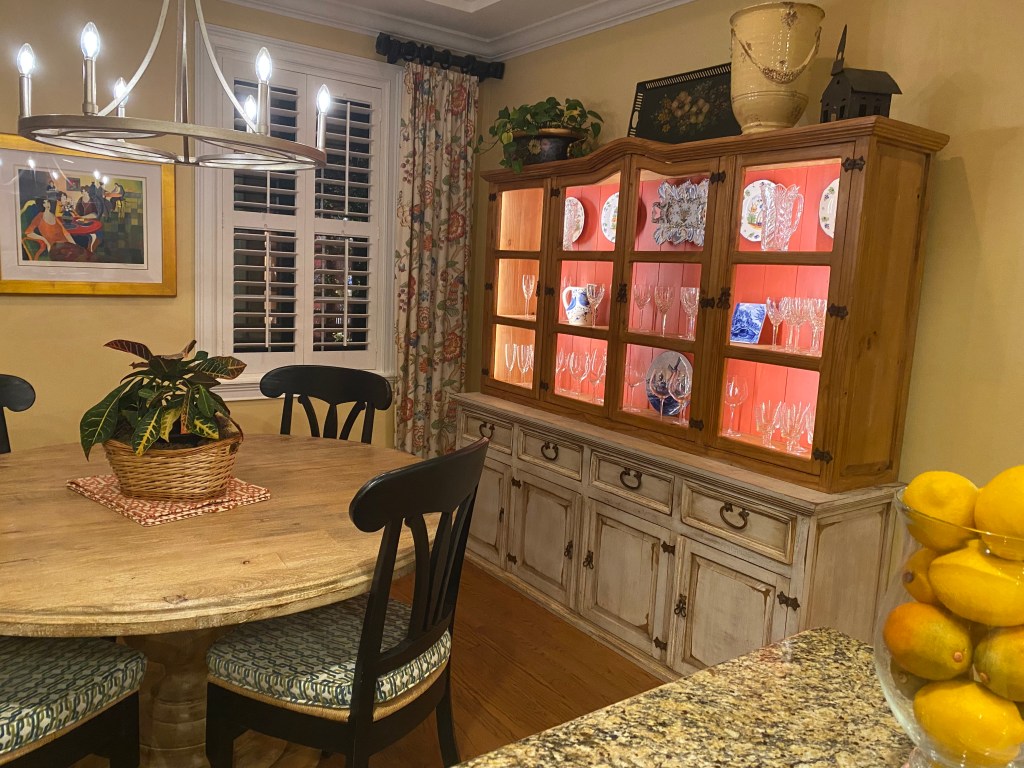