When you and your partner are both artists, a pied-à-terre in the same city you call home isn’t a luxury, it’s a necessity. For illustrator Naomi Otsu, known for her work with the Museum of Ice Cream and Adidas, her one-bedroom in Brooklyn’s Boerum Hill neighborhood, a 20-minute commute from her primary residence, isn’t just an office where she can spread out but a place to crash when she’s working against the clock. It has the added benefit of being the first apartment Otsu has rented just for herself, without a roommate. “I’ve never had complete control over a space before,” she says.

As soon as the paperwork was filed, Otsu got to work making a one-tenth scale model of the floor plan on her computer. “I had every measurement,” she says. Otsu had lived in her old place in Williamsburg for nearly 10 years, so she channeled the excitement into planning. By the time moving day came around, the new pieces were already on their way.

Enthralled by furniture catalogs since she was a child, Otsu already had a vision for where each piece would go, starting with her 12 horoscope prints above the workstation, mounted on card stock in simple Amazon frames. “To finally have walls to display everything, that’s all I wanted,” she says.

That and room for her stack of floor pillows. Despite splurging on a jade green sofa, Otsu admits she much prefers sitting on the ground. “It’s where my Japanese side comes into the design,” she says. “I’d much rather gather around the coffee table than up on the couch.” Even meals are taken there—bringing the conversations literally down to earth helps Otsu feel closer to her friends.

The only time she is ever in a chair for long periods of time is when she’s working on a commission for the likes of New York magazine or Door Dash. Her office space, tucked away in an alcove off of the living room, is sparse—save for a USM desk and small set of drawers for all of her pens. “My environment directly affects my work, and I like that to speak for itself,” she explains. Masking tape is always on hand to display works in progress; during the drafting phase, variations are strewn around the room in order to see as many options at once.

Her workspace walls are dedicated to her own musings, but the living room features a selection of graphic art posters from icons Herman Miller and David Shrigley, and Swim by Park Sang Hee is front and center on her Frame TV. However, only a few are actually hung. “It started out of necessity, but it makes the space feel like a work in progress,” she says. “I don’t like finality.”

Otsu first got practice mixing textures in her artwork—she’ll blend oil and watercolor paints or digital and analog sketches—but it’s quickly become the norm in all corners of the studio. Chrome hardware on the sofa is contrasted by a rattan basket on the floor, and the kitchen’s metal locker credenza is softened with a paper lantern table lamp. But while mixing and matching is key, Otsu is equally mindful to spread similar finishes out. “I don’t like too much of one thing in a room,” she says. The kitchen island is made of plywood, but the wood doesn’t show up again until the shelving in the living room. White linen adorns the floor pillows and Otsu’s bed. Nothing feels too matchy-matchy, especially when there’s a cobalt blue side table and cowhide rug sprinkled in. The latter is just soft enough to stretch out on for when the next project is done.

Sat Apr 30 , 2022
When interior designer, developer, and TV personality Anthony Carrino set out to gut renovate a 1960s stone farmhouse on 3.9 acres in the Catskills, it was essential that the home was just as comfortable in the dead of winter as the heat of summer. Carrino and his wife wanted it […] 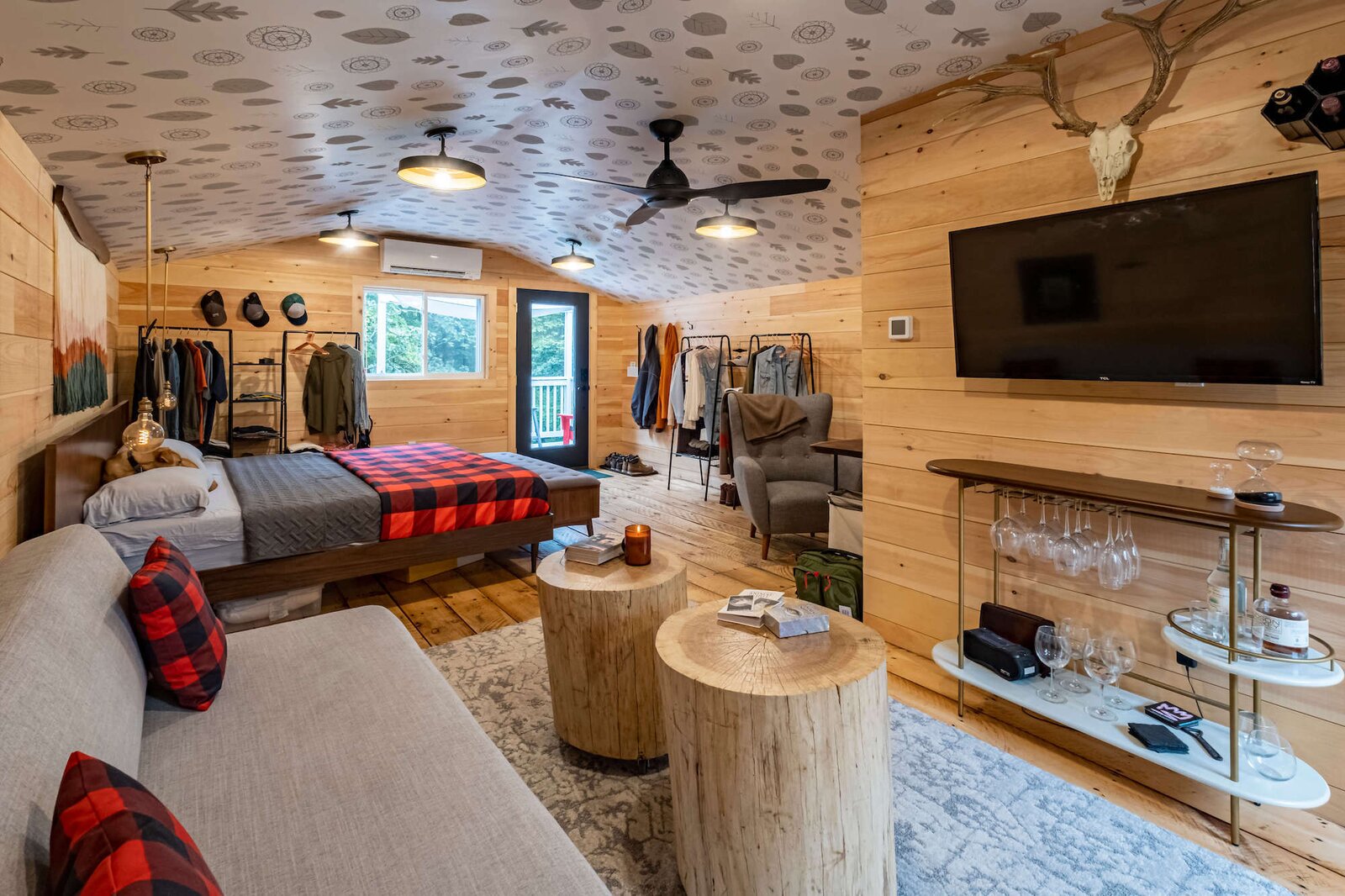