Over the course of his 50-year career, Jacques Grange has designed homes for the world’s most respected collectors, artists, designers and taste-makers, from Yves Saint Laurent to François Pinault. In his new book, collector and Galerie du Passage founder Pierre Passebon examines Grange’s wide-ranging inspirations and exquisite taste.

As a child, Jacques was a dreamer who just liked to draw. His schoolwork suffered as a result, but, curiously, his teachers would tell his mother over and over that she didn’t need to worry about her son’s future. Even so, she carried on worrying and, against his father’s advice, enrolled Jacques at the École Boulle, the college of fine arts and crafts in Paris. He was 15, and for him it was bliss. All the weight of his high school studies was lifted, and in its place came a burgeoning interest in the subjects taught at his new school: cabinetmaking, tapestry weaving, model making, engraving, drawing, perspective and art history. After graduating four years later, he enrolled at the École Camondo to specialise in interior design.

Jacques’ parents were from a generation for whom it was usual to furnish a home for life when they got married, at a time when divorce was rare. With the exception of the occasional magazine article, decoration and interior design were far removed from his world.

The entrance hall at Villa Mabrouka in Tangier, which was refreshed by Jacques Grange in 2017. © François Halard

One of his student friends was Michel-Yves Bolloré. When Jacques first saw the interiors of the family’s opulent hôtel particulier, decorated by the interior designer Henri Samuel, it came as a shock. Impressed by his friend’s house, Jacques came to the realisation that interior design was a profession in its own right. Years later, after graduating from the École Camondo, he asked Michel-Yves’s mother, who was very fond of him, to ask Henri Samuel if he would take him on as an intern. And he did.

Working as assistant to Henri Samuel was an exhilarating experience. Jacques was involved in the impressive restoration of the Grand Trianon at Versailles, commissioned by the Minister of Culture, André Malraux, for President de Gaulle to entertain his prestigious guests. Then came commissions to decorate the Château d’Armainvilliers, owned by Edmond de Rothschild, and the apartment belonging to Marcel Bleustein-Blanchet, with its remarkable bronze bookcases by Diego Giacometti. Henri Samuel was skilled in mixing the classical and modern by introducing works by contemporary artists such as Guy de Rougemont, Philippe Hiquily, François Arnal and Diego Giacometti. Jacques’ job was to oversee all these commissions, which were numerous, to keep a careful eye on them.

He remembers with amusement his visits to Diego Giacometti. The sculptor was charming and easy, but he tended to give priority to any attractive female client who happened to come along, a chivalrous approach that was exasperating for other clients and their deadlines. These projects taught Jacques how to sustain traditional French workmanship by respecting the highest professional standards and the astonishing skills of French craftsmen and women. 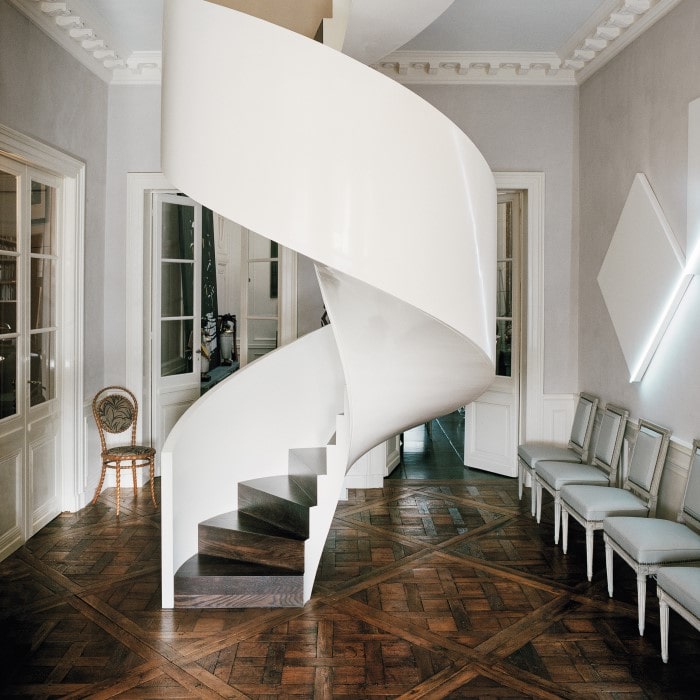 Later on, Jacques discovered Art Deco while on vacation with the Noailles at Hyères, in their modernist house commissioned from Robert Mallet-Stevens in 1925, with furniture by Pierre Chareau, Djo-Bourgeois, and Mallet-Stevens. Life there was carefree and fun. Recognition of these artists was beginning to pervade the Paris art gallery world, launching a fashion that continues to this day.

After Marie-Laure’s death, Jacques’ relationship with Charles de Noailles continued. A great horticulturalist and passionate gardener who created a magical garden around his villa overlooking Grasse, Charles also took a close interest in the work of young interior designers. He would tactfully offer them advice. Jacques remembers that he expressed reservations about the 1970s craze for ceiling spotlights. “Avoid the pitfalls of fashion,” was his most valuable counsel. Jacques still enjoys a close relationship with the Noailles family. A friend of Natalie Perrone, the youngest of the children, he is also close to her son Carlo and his wife Polissena, who recently asked him to refresh the salons at the Ermitage de Pompadour, the prestigious residence that bears witness to the influence of the Noailles.

Like Carlo Perrone at the Ermitage de Pompadour and the family apartment in Rome, Pierre-André Maus, too, asked Jacques to decorate his houses, just as his parents Bertrand and Micheline had before him with their various commissions. 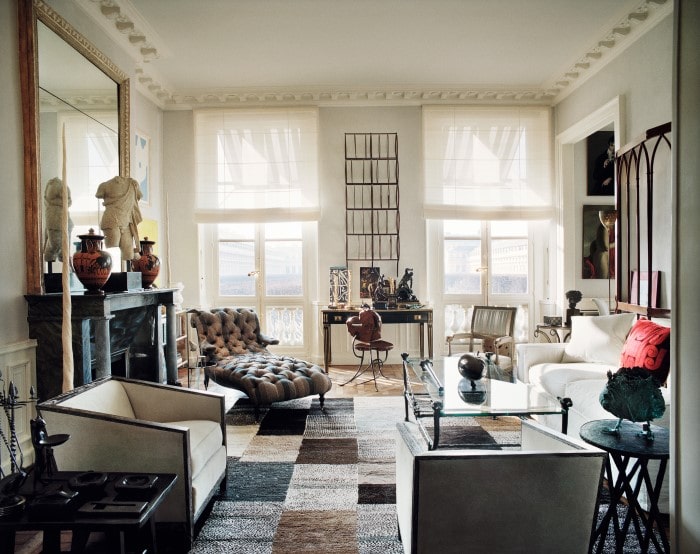 Travel has always been a source of inspiration and wonder for Jacques. Through the Pahlavi family he discovered Iran and India, and, most importantly, Mogul art, which for him remains one of the pinnacles of civilisation.

For Jacques, the 1970s were a decade of travel and discoveries that were to influence fashion and decoration. Then came Morocco. During a stay with Yves Saint Laurent, he made the simultaneous discovery of both Marrakech and Andy Warhol. The result was an explosion of colour: the colours of North Africa and the Middle East, and the colours of pop art. With them, his world became infused with colour. Having an eye is a gift; having a style takes work.

Andy and Yves were both voracious collectors. In Paris, Jacques would accompany them on their shopping trips for the Art Deco pieces they made fashionable. Later on, his relationship with Yves and Pierre Bergé became professional.

He was fortunate enough to decorate all their homes: Yves’ modernist studio apartment on avenue de Breteuil; the apartment on rue de Babylone; Pierre’s suite at the Hôtel Lutetia; the couture house on avenue Marceau and the accessories boutique on rue du Faubourg-SaintHonoré; Château Gabriel at Deauville and its dacha; and in Morocco, Villa Oasis in the Jardin Majorelle in Marrakech and Villa Mabrouka in Tangier.

In Grange’s Paris apartment, a Nabis screen dominates the salon with a sofa designed by Jacques Grange. © FRANÇOIS HALARD

Interior design is all about teamwork: without his loyal co-workers and the craftsmen and women whose outstanding skills entrance him, Jacques could never have found expression for his ideas nor achieved such high standards. In their range and variety, his projects – from palaces and private houses to public spaces and restorations of historic sites – are all fascinating exercises for him. However opulent some of his designs may be, he has never lost his love of homes that are simple and welcoming. His passion for cabanas and wild places is widely shared at Comporta in Portugal, where his style has become a benchmark of fashion.

Amazingly, he finds as much inspiration in a Portuguese thatched cabana as in a royal palace in the Emirates. He makes houses in the way others make poetry, music, or paintings. As he says: “Give your home love, love works miracles!” 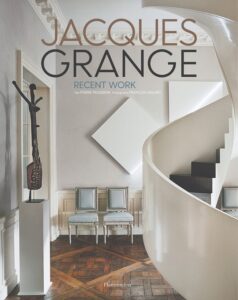 An Interiors Odyssey: The Work of Jacques Grange

How to avoid getting scammed by a contractor