An 1883 Victorian with five bedrooms, three bathrooms and a one-bedroom, one-bathroom guest apartment, on a 0.1-acre lot

This house was first built in downtown Los Angeles on Bunker Hill, a fashionable area at the time. It has since been moved twice — first in the early 1900s, to an area just west of the city center, and again in 1989. By the middle of the 20th century, most of Bunker Hill had been razed, which makes the survival of this home especially remarkable.

The property is now part of the Angelino Heights Historic Preservation Overlay Zone, five minutes from Echo Park and less than 10 minutes from Silver Lake and downtown Los Angeles.

Indoors: The front door, set in a covered porch, opens to a foyer papered in a blue-and-gold print from Farrow & Ball. To the right is a living room with tall, street-facing windows trimmed in the original wood molding, which was refinished during the home’s restoration. Beyond is a formal dining room with a fireplace surrounded by an ornately carved mantel. At the back of this level is the kitchen, which has porcelain counters, Douglas fir flooring, stainless-steel appliances and an island topped with butcher block.

There are two bedrooms on this level, off the kitchen. One is large enough to hold a full-size bed, with a bathroom that has a glass-walled shower next door. The other, which could be used as a primary bedroom, has a decorative fireplace and a bathroom next door with a claw-foot tub in front of stained glass windows.

To the left of the stair landing on the second floor is a bedroom currently used as an office, with tall windows overlooking the street. Next door is another possible primary bedroom, with more tall, street-facing windows. Across the hall is a cozy guest room with access to the rear deck and a kitchenette that has a white enamel stove and cream-colored cabinets. The bathroom on this level has a claw-foot tub, a vanity with a soapstone counter and another stained glass window.

The guest apartment has a living room, kitchen, one bedroom and a bathroom with a combined tub and shower.

Outdoor space: The deck between the main house and guest apartment is sunny, with space for a dining table and separate lounge area. A small lawn, accessible from the front porch, wraps around the side of the house. The garage in the back holds three cars.

A 2002 house with three bedrooms and two and a half bathrooms, on a 0.3-acre lot

This house is in Leucadia, a section of Encinitas named by English spiritualists who settled there in the early 1870s. Today, bumper stickers and T-shirts bearing the slogan “Keep Leucadia Funky” are a common site.

Grandview Surf Beach, popular with the surfing community, is about five minutes away. Local businesses include taquerias that face the beach, a coffee shop in a converted train station and a family-owned custom T-shirt shop in operation since 1975.

San Diego is 30 minutes away, and the beach cities of Orange County are about an hour’s drive.

Indoors: A paved path running through the front yard leads to the main entrance, where wood-and-glass double doors open into a bright living room with skylights, hardwood floors, a fireplace framed in Spanish tile and glass doors that open to the side yard. Off one side of this space is a home office.

The hardwood floors continue into an open kitchen and dining area with glass doors that open to a patio. The kitchen has wood cabinets, an island topped in green stone and a window over the sink that looks out at a stone fountain on the patio.

A carpeted family room off the kitchen has more skylights, built-in cabinetry and an attached full bathroom with a combined tub and shower. Also in this part of the house is the primary bedroom, which has a walk-in closet, an en suite half bathroom and outdoor access through more glass doors.

Two guest rooms with direct backyard access are off a hallway on the opposite side of the house. They share a bathroom with a combined tub and shower.

Outdoor space: A stone patio off the dining area and kitchen has a built-in barbecue and is surrounded by mature palm trees. A wooden deck wraps the front of the house, and the front yard is landscaped with grass, mature trees and hedges. The attached garage holds two cars.

A four-bedroom, three-bathroom desert compound built in 1999, on 40 acres

Known as Le Haute Desert Aerie, this compound includes several vintage Airstream trailers and a number of camping spots. It is about 40 minutes by car from Joshua Tree National Park, a destination for tourists from around the world and for weekenders from Los Angeles and San Diego, which is about three hours away.

The nearest services, including grocery stores, restaurants and gas stations, are along Twentynine Palms Highway, about half an hour away. Pioneertown’s small downtown, also about a half-hour drive, has an Old West-style Mane Street, a popular restaurant and music venue called Pappy and Harriet’s, and a general store selling locally made goods.

Indoors: A long driveway winds across the property, leading to a garage entrance in front of the house. A covered porch extends from there to the front door, which opens into a foyer with black-and-white tile floors.

To the right is a living room with a built-in entertainment center, a fireplace surrounded by a colorful mosaic and floor-to-ceiling windows facing the porch.

Straight ahead from the foyer is the kitchen, which has Spanish-tile floors, wood cabinets and access to one of several outdoor terraces. On the other side of the kitchen is a dining room with ornate wrought-iron light fixtures and a beamed ceiling.

The primary suite is on this side of the house, off a corridor extending from the dining room. It includes a separate sitting room with a wall of windows overlooking the property. The en suite bathroom has a round soaking tub in a windowed alcove.

The guest rooms are on the opposite side of the house, off the foyer. One has bright blue walls, inspired by the seller’s travels in Morocco, and an en suite bathroom with a stone pedestal sink. The other two have walls in a rich orange and share a bathroom with a carved wood vanity.

Outdoor space: The outdoor spaces closest to the house are designed for entertaining. The terrace off the kitchen has a built-in barbecue, and the patio in front of the house is big enough to accommodate a large party. Several vintage Airstream trailers on the property have access to an outdoor shower. The property also includes a stone bathhouse and several spots, including one next to a small lake, appropriate for weddings or other ceremonies. A two-car garage is attached to the main house.

In Struggling Murano, a Design Intervention

Fri Jun 10 , 2022
This article is part of our Design special report previewing 2022 Milan Design Week. Can high design reverse Murano’s decline? Could one transcendent lamp, or a single game-changing wine goblet, or a fruit bowl created on the Venetian island by one of today’s top designers restore the reputation of this […] 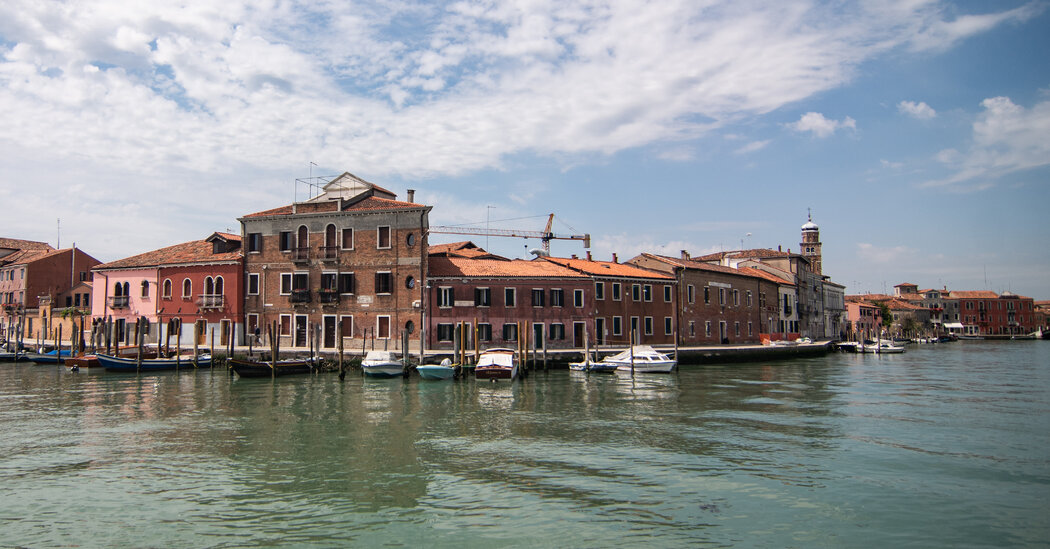