Earlier today, Russian forces attacked Ukraine’s Zaporizhzhia Nuclear Power Plant near Enerhodar, in the country’s south-east. Rafael Mariano Grossi, the Director General of the International Atomic Energy Agency (IAEA), reported that a building within the site had been hit and had caught fire. The fire was put out without having caused any direct harm to the reactors, and detectors continue to report normal radiation levels, Grossi said in a press conference at the IAEA’s headquarters in Vienna.

But the incident has highlighted the possible dangers of warfare around nuclear sites, Grossi and others say. Ukraine has 15 working nuclear reactors, which ordinarily produce roughly half of its electricity. With six reactors and a capacity of nearly 6 gigawatt, Zaporizhzhia is the largest nuclear power plant in Europe. It is now occupied by Russian forces, as is Chernobyl — the site of the worst nuclear accident in history.

Nuclear experts gave Nature their assessments of the possible dangers.

Damage from an accidental hit is unlikely

The reactors at Zaporizhzhia are of a modern design. Unlike the Chernobyl reactor, each is enclosed in a pressurised steel vessel, which in turn is housed inside a massive reinforced-concrete containment structure. (The design is called VVER — the Russian acronym for water-water energetic reactor).

The plants also have multiple safety back-up systems, says Michael Bluck, director of the Centre for Nuclear Engineering at Imperial College London. He says that it would be very alarming if the Russian forces were deliberately trying to breach the containment structure, but that catastrophic damage from an accidental hit is unlikely. “If a missile goes astray, I’m less worried about [that]. These are very robust structures,” he says.

Koji Okamoto, a nuclear safety researcher at the University of Tokyo, agrees. “The containment structure may have a resistance to normal weapons,” he says.

And even at the Chernobyl disaster site, the risk of accidental radioactive releases is limited, according to Cheryl Rofer, a retired nuclear scientist based in Santa Fe, New Mexico. “The dangerous material in it is in the basement of the reactor building, protected by the remains of that building and many tons of concrete that have been poured over it,” Rofer wrote in a post on her blog. The ruins of the reactor that exploded in 1986 are enclosed in a massive 63-metre-tall steel and concrete shell called the sarcophagus. “I suspect that a direct artillery hit could breach the shell and allow a small amount of radioactive contaminants to escape, but that solid mass of melted fuel elements, containing uranium and plutonium, is inaccessible,” Rofer wrote.

Spent-fuel ponds are a hazard

Most nuclear power plants – including those at Zaporizhzhia — have water pools where spent fuel rods are kept as they cool down. Damage to one of these pools, whether accidental or intentional, could cause the water to leak out or boil off. The rods would then overheat and start a fire, several observers have warned.

Although not comparable to the Chernobyl disaster in 1986, such a fire could be hazardous to people in the vicinity of the plant, and even to those further afield. “Russia needs to keep in mind that the prevailing winds are towards Russia,” Rofer tells Nature.

One mitigating factor is that fuel rods that have been in the pool for several weeks or months are less dangerous than they were at the beginning, as the main cancer-causing isotope, iodine-131, decays quickly, Bluck points out. In the press conference, Grossi said that no issues had been reported with Zaporizhzhia’s spent fuel ponds.

Outside power and cooling must be maintained

As of 4 March, five of Zaporizhzhia’s six reactors had been shut down, Grossi reported. But even powered down, a reactor that’s still loaded with fuel is not completely devoid of risk. Under normal operations, uranium nuclei in the fuel rods fission, or break up, leaving behind nuclei of lighter elements. These isotopes accumulate during the lifetime of the rods, and many of them are highly radioactive, which continues to produce heat even after shutdown.

This means that the core of a reactor that has just been shut down must be actively cooled, which requires power, normally taken from the grid, to keep water circulating around the core. “You have to remove the decay heat,” Bluck says. “If you don’t cool it until it’s gone, then the core will overheat.” If the reactors’ active cooling suddenly stopped, plants like Zaporizhzhia could face a scenario analogous to that at the Fukushima Daiichi Nuclear Power Plant in Japan, when power was cut off in the aftermath of the 11 March 2011 Tōhoku earthquake and tsunami, and three reactors melted down.

A similar event could occur if there is damage to the systems — including pumps, heat exchangers and back-up diesel generators — that provide active cooling and are outside a reactor’s protective containment structure, says Okamoto. “Any nuclear reactor could be damaged when coolants are lost.” There are safety systems in place at Ukrainian plants that make the reactors more resilient to this damage. “VVER-1000 has several alternative cooling systems,” he says. “So it will not immediately be dangerous.” However, Okamoto points out that active cooling might be required for more than ten days after a reactor is shut down. It is unclear whether back-up cooling systems would be able to last for this long.

Several specialists told Nature that even if a reactor core were to melt down, it might not cause a major release of radioactive materials. The main impact of such a crisis could be related to psychology and how people — including politicians and policymakers — react. Many Europeans still remember the days when Chernobyl’s radioactive cloud spread over the continent. “People do not judge the risk of radiation well, and they are much more frightened, frequently, than they need to be,” Rofer says.

How to Create a Home Bar That Will Dazzle Your Guests

Sat Mar 5 , 2022
The pleasures of visiting a cocktail bar extend well beyond the libations. It’s just as much about the company, the atmosphere, all the accouterments. At home, a thoughtfully designed bar can create a similar feeling and serve as a special place for after-work drinks and celebrations with family and friends. […] 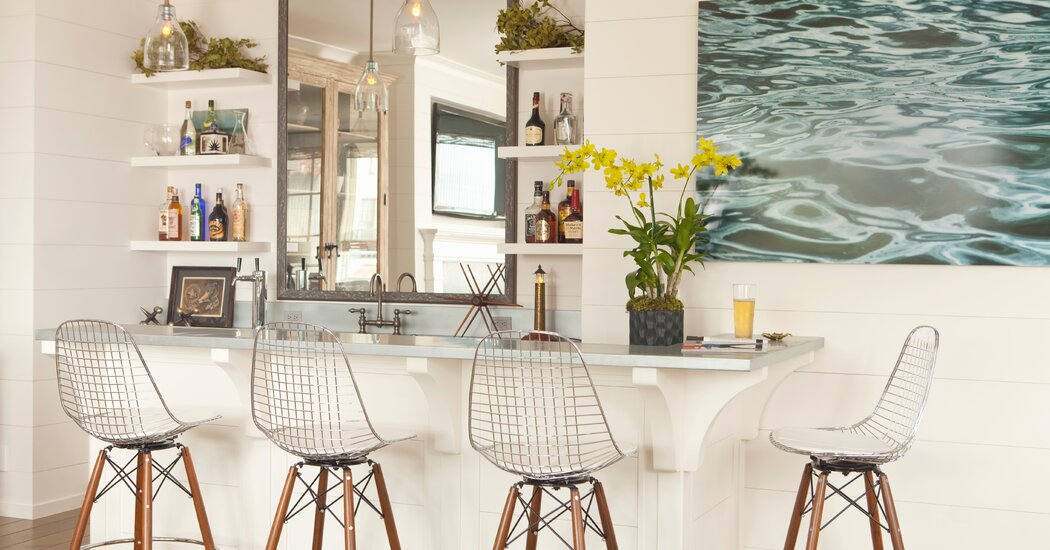