Planks of burgundy cedar wood frame 700 mismatched windows, forming a patchwork quilt of glass panes against a backdrop of mountain peaks and rolling groves of evergreens.

The facade of the Kamikatsu Zero Waste Center is striking, to say the least; almost as striking as the fact that it was built from trash.

Located on the banks of the Katsuura River, on a double-horseshoe bend in the remote mountain town of Kamikatsu in southern Japan, the center was opened in 2020 amid the Covid-19 pandemic and has become a new heart for the community.

Replacing the former “prefab shack” where garbage was sorted, the new center was constructed to aid the town’s ambitious goal of achieving 100% zero waste, said Hiroshi Nakamura, head architect for the project and founder of NAP Architectural Consulting.

The building won an award from the Architectural Institute of Japan last year, and with the increased attention on the town, the community also hopes it can attract new, eco-conscious residents to boost its dwindling population.

“We wanted to make this (center) a place that the residents could be proud of,” said Nakamura.

Nakamura and his team began designing the zero waste center in consultation with Kamikatsu’s residents in April 2016.

They used predominantly local and recycled materials, choosing cedar timber from the surrounding forests to create the support structure and skeleton of the building. Kamikatsu had a thriving timber industry until the 1970s, when competition from cheap overseas lumber put the industry in decline. Using local materials helped to reduce fuel from transportation and packaging, said Nakamura — as well as incorporating a key element of the town’s history. The timber was left in its raw, round form rather than cut into square beams or planks to further reduce waste.

For the remaining structure and interior, almost everything was recycled. But creating a building from trash is no easy task. “We usually design first and then apply ready-made materials to fit the design,” the architect told CNN. Instead, the design process took more than two years, sourcing and fitting together every piece like a jigsaw puzzle.

Some items — including roofing materials, metals for waterproofing, bolts and screws for joints, and equipment such as air-conditioning and plumbing fixtures — had to be new to ensure compliance with building codes and safety standards, said Nakamura. However, limiting the amount of new resources still helped to reduce the building’s environmental impact, and cost, which Nakamura estimated would have been double without the use of recycled materials.

Broken glass and pottery were transformed into terrazzo flooring, and green glass bottles into a recycled chandelier. Credit: Koji Fujii

The team had to be resourceful, asking manufacturers for excess or imperfect materials that would ordinarily be scrapped, such as defective tiles, said Nakamura.

They also utilized “participatory architecture” practices for the project. While that usually involves consulting with residents on what they want or need from a building, Nakamura said the Zero Waste Center takes this concept one step further, as it was built using materials donated by the town’s 1,453 residents.

Broken glass and pottery were transformed into terrazzo flooring, harvest containers from a local shiitake mushroom farm were converted into bookshelves, and a disused bed from a nursing home was transformed into a sofa. For the building’s striking facade, the residents collected old windows, some retrieved from abandoned buildings.

“The architecture itself was created with the memories of the residents, so they have an attachment to it,” said Nakamura.

Nestled in the central mountains of Shikoku Island, Kamikatsu sprawls across an expansive 27,000 acres. Its settlements cluster along a winding stretch of highway that follows the bends of the Asahi and Katsuura rivers, weaving through valleys of cedar-covered mountain slopes.

The town’s remote location, an hour’s drive to the nearest city, means that Kamikatsu has always managed its own trash, and has a strong culture of recycling, said Momona Otsuka, chief environmental officer at Kamikatsu Zero Waste Center, who moved to the town in 2020.

In 1998, an incinerator replaced open-air burning — but the fumes contained unsafe levels of toxic dioxin and the incinerators were shut down shortly after.
Then in 2003, Kamikatsu made a “zero waste declaration,” hitting headlines as the first place in Japan to make such a pledge. Over the years, Kamikatsu’s residents developed a detailed 45-category recycling system that helped them achieve an 80% recycling rate as of 2016 — compared to 20% across the rest of Japan in 2019, according to the latest figures from the Japanese government.

Old harvest boxes from local farms have been upcycled into storage shelves in the community hall. Credit: Koji Fujii

But getting to true zero waste, originally targeted for 2020, is tricky, said Otsuka: “Some categories of waste, such as diapers and disposable heat packs, are exceedingly difficult and expensive to recycle.”

The Zero Waste Center was designed to address this problem, she said. Using a one-way system, the center is divided into areas that make recycling easier: a trash sorting and collection zone, a recycling center, an education room, and a volunteer-led shop where free, reusable items such as clothes, plates, books and electronics are donated and picked up by residents. Anything that can’t be recycled is collected and sent to an incinerator or landfill in the nearest city, Tokushima.

But the center isn’t just about helping the environment: it’s also for the people. Residents typically visit once or twice a week, and with public spaces incorporated into the design, it doubles as a community hub for the spread-out town.

Like many places in Japan, Kamikatsu’s population is aging and declining, with younger residents seeking work in larger towns and cities. It’s hoped that the town’s eco-friendly approach will attract new residents seeking a more sustainable lifestyle — like Otsuka. She sees opportunity for growth through eco-tourism, supported by the opening of a boutique hotel at the Zero Waste Center in May 2020.

Media coverage has created a sense of pride in the community, said Otsuka, adding that the center is already attracting tourists: in its first year, 5,000 people visited the town, and 1,200 guests stayed at the hotel, despite the Covid-19 pandemic. As tourism opens up, she hopes more visitors will come to “experience zero waste in a positive way.”

While building with waste is unusual, it isn’t unique: innovative architects around the world have experimented with trash-based construction. The facade of Collage House in Mumbai, India, is made with salvaged doors and windows, while David Hertz Architects used the wings of a decommissioned Boeing aircraft in the 747 Wing House in California.

But the Kamikatsu Zero Waste Center has recycling built into its very foundations. Future innovation or population decline could mean a decrease in trash, leaving the building redundant. In anticipation of this, Nakamura designed the building to be easily downsized, or taken apart entirely and recycled.

From above, the building’s question mark shape is clear. It asks people to question their consumer habits, and use less. Credit: Koji Fujii

“The concept of zero waste is not about the final disposal of waste, such as eliminating garbage (that goes to landfill), but rather we need to think about how to eliminate waste from upstream,” Nakamura added.

Designing the Kamikatsu Zero Waste Center has motivated Nakamura to seek out greener architecture projects, and to be more creative in sourcing materials — and he hopes that the center will inspire others to rethink waste, too.

“My perception of, and way of thinking about garbage, has changed 180 degrees,” Nakamura said. “I learned the importance of creating new things while inheriting memories.”

Fri Jan 28 , 2022
“The owner had a half-pipe skateboard ramp in the loft because it was just one big open room,” says Charles Tribbett, who, with wife, Laura Tribbett, bought their 3,300-square-foot Chicago loft in 2017 for $1.075 million. “Apparently, the people living below moved out because they just couldn’t take it anymore. […] 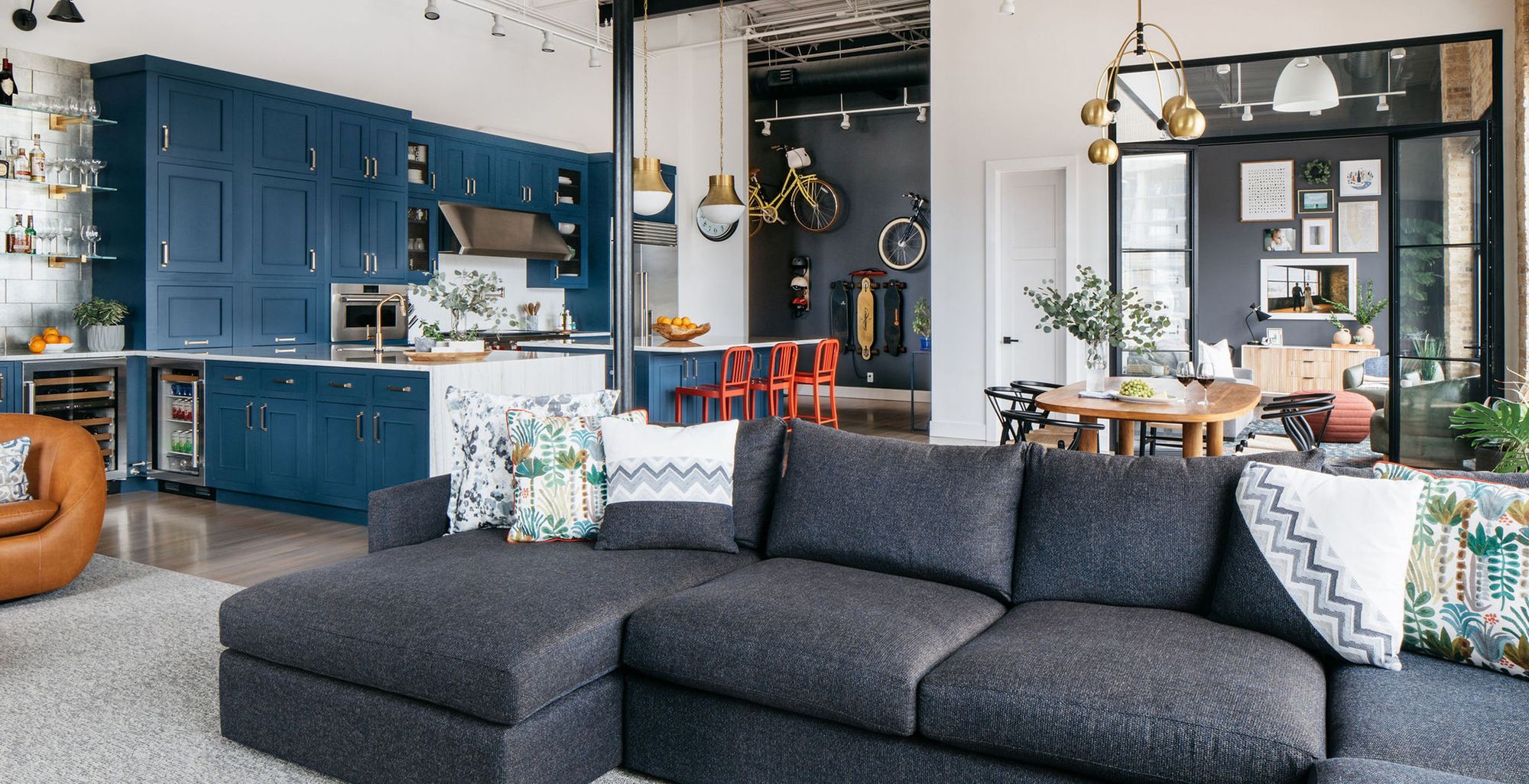