When a couple in their 40s tasked Miogui Architecture with turning a 137-square-foot Parisian apartment into a flexible live/work space, the firm focused on scale, sunlight, and geometry. “Before our intervention, the bathroom and the kitchen were too large for the size of the apartment, and the bathroom had very little natural light,” says founding partner Léo Berastegui.

The apartment, located in Paris’s 20th arrondissement, is one of many compact units in a 1930s building that was once a hotel. “The neighborhood is a popular district close to the Père Lachaise cemetery and the Gambetta subway station,” says founding partner Sabine Fremiot.

The duo began by knocking down the apartment’s existing walls and relocating the bathroom and the kitchen so that the two adjacent rooms would form one large triangle. “This created more space for the living room, and more natural light for both the living room and the bathroom,” Berastegui says. “We gave a window to the living area to make the space look and feel bigger.”

They sectioned the kitchen from the rest of the apartment by hanging pale blue drapes that can be pulled back to connect the space to the living area. “The curtain also makes the kitchen disappear during office time,” Fremiot says.

Berastegui and Fremiot outfitted the kitchen cabinetry, counter, and backsplash with raw pine, creating contrast in texture and color between the cool, sleek drapery fabric and the warmth of the wood. “It’s like a small surprise when you open the blue curtain and find this wooden space,” Fremiot says.

The architects painted the wall that sections the bathroom the same pale blue to provide breadth and continuity. A mirrored panel covers the interior of the bathroom door, so that when the door is open, light and space are reflected making the apartment feel much larger than its 137 square feet.

Inside the bathroom, Berastegui and Fremiot covered the floor and the walls with bright white mosaic tile. “This unifies the elements in the space,” Berastegui says.

They created a roof for the kitchen and bathroom volumes by laying a triangular sheet of metal with an oculus cut out of its center. “The triangular roof references a gable form that you might typically see on a small house,” Fremiot says. The roof cutout fills the spaces with natural light and lends visual interest to the apartment’s interior. “When the bathroom is being used, a circle of light appears on the living room ceiling,” Berastegui says.

In the open-plan living area, the architects stripped away layers of materials to reveal rough concrete columns and beams. “The concrete was hidden by years of coatings,” Fremiot says. “We wanted to bring back some of the history of the building and create a strong sense of materiality.”

To balance the rough and raw quality of the structural concrete, Berastegui and Fremiot laid parquet floors in the living area. “The wood brings softness,” Berastegui says. “We laid it in the direction of the largest diagonal in the room to maximize the feeling of spaciousness.”

An office area, a sofa bed, and a mirrored wall mark the living area. “An entire wall is covered with a big mirror without joints,” Fremiot says. “It reflects the diagonal parquet in a dynamic way.”

The parquet flooring, the mirrored walls and door, the use of daylighting, and the apartment’s materiality reflect design strategies that the architects picked up while working in Japan. “We learned about strong attention to detail and the power of abstraction,” Berastegui says. “By convention, a door is almost always the same size—but if you make it taller and more narrow, with an abstract handle and an invisible frame, it changes the way you see the room.”

Cost of home DIY projects rises due to shortages: should you delay?

Sun May 8 , 2022
Home improvement, DIY and construction projects are getting more expensive and taking longer in France due to a lack of supplies and rising prices, with industry professionals advising extra caution. Half of home projects are experiencing delays of 10-30% due to difficulties in sourcing raw materials, the architecture association le […] 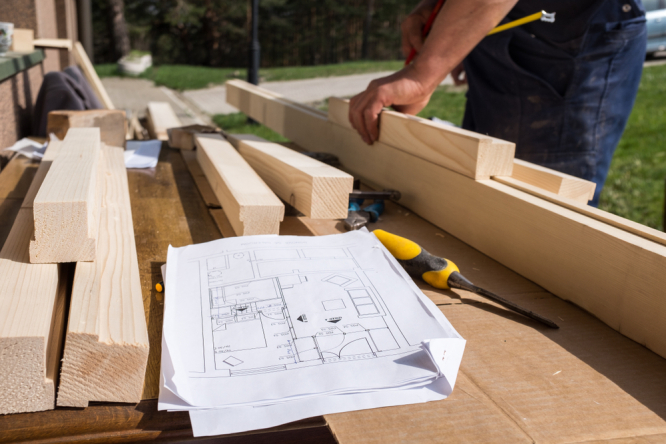