This article is part of our latest Design special report, about new creative pathways shaped by the pandemic.

The coronavirus pandemic has disrupted many lives. But for some people, the disruption has been positive, offering the opportunity to take their skills in a new direction.

For the New York architect and designer Marc Thorpe, this shift began in 2019, when he and his partner, Claire Pijoulat, one of the founders of the New York design platform WantedDesign, built a 500-square-foot cabin in New York State’s western Catskills. Mr. Thorpe, who is best known for his products for international companies like Moroso and Venini, had a hard time finding a builder who was willing to execute his nontraditional design. He and Ms. Pijoulat started to think about how to design houses that were less expensive to build, and just as important, that were sustainable and less energy dependent.

This was followed by what he called “a pandemic moment, where people were trying to leave the city, and have simpler lives.” But some of those fleeing New York were willing to pay $1 million and up for houses, which Mr. Thorpe found disturbing. As Ms. Pijoulat recalled, they saw an opportunity to give local residents access to “modern houses that had been out of reach for them,” as well as demonstrating that “modern architecture doesn’t have to be cold, austere and expensive.”

As a result of spending so much time in the Catskills during the pandemic, Mr. Thorpe was able to set up a local network of builders and solar energy engineers. In 2021, he established a new business, Edifice Upstate, which, according to its website, develops “affordable, ecologically sustainable” homes. But “sustainable,” does not mean solar panels tied to the local power grid. Instead, the company’s all-wood houses will be built with off-the-grid solar technology.

Mr. Thorpe and Ms. Pijoulat’s one-room cabin was deemed too austere for most buyers, but it did change their thinking about what constitutes a comfortable home. “I think we’re on the cusp of a new movement,” Mr. Thorpe said. “We’re focusing on something small and doable, not a grand gesture — the micro that leads to the macro.”

For the Danish curator and gallerist Elisabeth Johs — who had been living, since 2017, in New York while taking courses at Sotheby’s and cofounding a gallery called Trotter & Sholer — the pandemic was an unpleasant surprise. Her visa expired in March 2020, as the city went into lockdown, so she went to Switzerland, where her parents were living.

During this time, Ms. Johs and a California-based painter with whom she was in a relationship hatched a plan to move to Mexico City and find a place where they could live and work together. Ms. Johs moved there in September 2021, but the artist was a no-show. Still, Ms. Johs decided to forge ahead with her plan. “When you’re heartbroken,” she recalled, “you have a lot of energy.”

She rented a house, in the city’s San Miguel Chapultepec neighborhood, that had been completed in 1981 by the noted Modernist architect Carlos Herrera. The 6,000-square-foot concrete structure, with its large windows and skylights, was not in great shape. Ms. Johs, working with the design firm Cadana, renovated the building, and bought furnishings from the Mexican companies ATRA, La Metropolitana and Decada. “My first goal was to make it livable,” she said. The space, called JO-HS, opened to the public in November 2021, and its bimonthly exhibitions focus mainly on Mexican and Latin American artists.

The building is entered through a reception area, which leads to a shop, and to spaces and patios that are filled with art. There is a lounge, with a vaulted brick ceiling and stone-tiled floors, adjacent to a dining room and kitchen. The main gallery space, with its installation of plants from an early exhibition and a big window, is off the larger of the two patios, and studio spaces are in the garage. Ms. Johs’s bedroom, a small living room and more office space are upstairs. She noted that it is “unconventional to have art shows in domestic spaces,” but she likes that she is “blurring the lines between studio and gallery.”

A recent exhibition, “LUZ,” focused on the subject of light, with vintage and contemporary pieces by designers, photographers and artists, including a large fluorescent-tube starburst, made in 2003 by Thomas Glassford, an American in Mexico City. Currently, “Domesticada” centers on works by female painters responding to the theme of “domesticated women.”

Ms. Johs said she is glad she went ahead with her plan, even if she had to do it alone. “You jump, or you don’t jump,” she said.

For others, the pandemic offered the chance to do something completely different. Andreas Kokkino has been a fashion and design editor (we worked together at T Magazine), as well as a fashion stylist. In 2018, he moved to Athens, and by 2020, he was in lockdown with his partner, Stathis Mitropoulos, a graphic designer, and tiring of the fashion world.

The couple were watching a documentary on Netflix, “Circus of Books,” about a legendary gay-porn bookstore in Los Angeles, when they became struck with the idea of opening their own business. Athens is full of bookstores and book lovers, but none that specialized in photography, design, fashion and cooking. “People were asking for magazines like PIN-UP, Toilet Paper and Cabana,” Mr. Kokkino said. “There is a great creative community here — they’re well traveled, and they’re looking for the cool stuff.”

The store, Hyper Hypo, opened in Athens in December of last year. Its name refers to its founders’ desire to sell goods that are “high” and “low,” as well as expensive and affordable. Formerly a warehouse, the bookstore was stripped and painted a deep blue, with glossy white for the new shelves. Tassos Govatsos, a local architect, came up with the design, including the shelving and central table. Mr. Mitropoulos created the pair of neon eyes in the window that signal the idea of visual culture.

“We wanted to see a clear space, bright and colorful — not cozy — that makes people think of contemporary shops in other cities,” Mr. Kokkino said. Posters that Hyper Hypo made of local artists’ work decorate the walls and sell for as little as $22. Among the design objects are elegant lights with marble bases, handblown glass globes and woven straw shades. There are also mugs, by the design firm Greece is for Lovers, that say, “Athens Sucks.” The lower level is a gallery used for cultural events.

The store now has many customers who stop by weekly, and Wanda, Mr. Kokkino and Mr. Mitropoulos’s black standard poodle, has proved equally popular. “She’s our mascot,” Mr. Kokkino said. “People are obsessed with her.”

Mr. Kokkino and Mr. Mitropoulos are already thinking of doing pop-ups and branch stores and creating merchandise; a series of wildly patterned tote bags, made by Mr. Mitropoulos’s mother, was a big hit.

Sun May 1 , 2022
Comedian Natasha Leggero was initially reluctant to take on her latest gig hosting the TBS series “Rat in the Kitchen.”  “At first I was like, wait, what? I shouldn’t be part of a cooking show, I’m famously a horrible chef,” Leggero, 48, told The Post. “I’ve got to make my […] 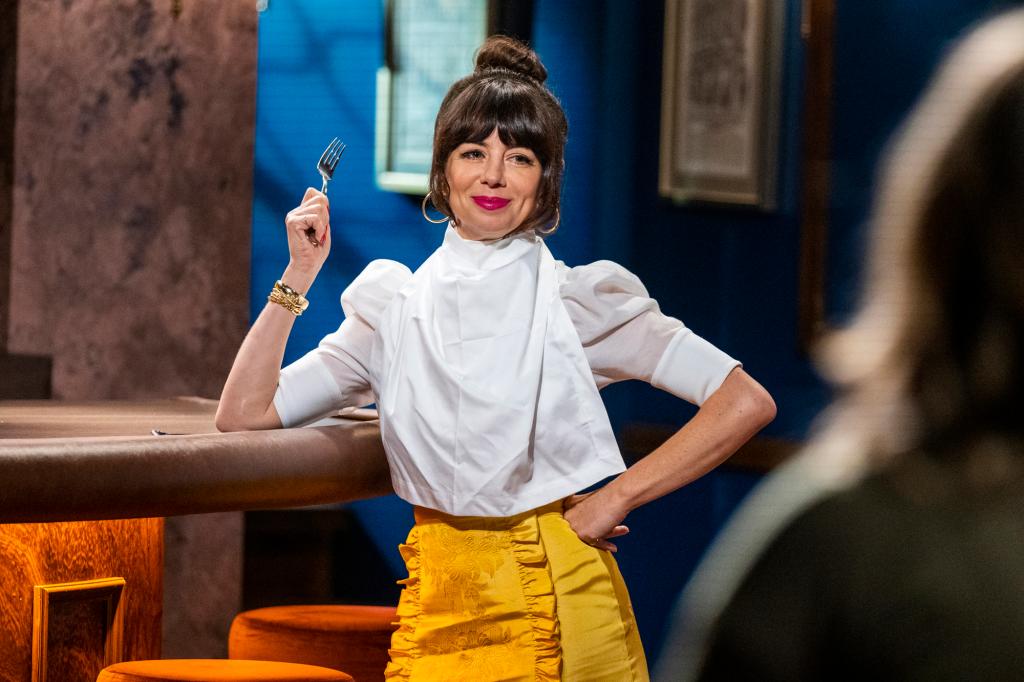