A power-hungry Scot strides down a corridor, murder on his mind. Is this another Macbeth adaptation I see before me? Undeniably, yes, but Joen Coen’s take on Shakespeare’s age-old tale looks unlike any other.

It doesn’t hurt to have acting powerhouses Denzel Washington and Frances McDormand on board as Lord and Lady Macbeth, but the setting Coen places them in also commands attention. Shot in black-and-white in the boxy Academy ratio, we’re transported into an uncanny world of castles sculpted out of light and shadow in angles sharp enough to draw blood.

Displacing the audience out of time and modern cinematic convention, “The Tragedy of Macbeth” looks as if it could be 100 years old — closer to a stage play and, at times, more a dream (or nightmare) than real life. Like if you reached out to touch it, your hand would pass right through.

Dechant joined the film after Coen, cinematographer Bruno Debonel and McDormand (producer and Coen’s wife) had bandied about ideas for close to a year. “I in no way walked into this project and said, ‘I got two words for you: ‘German Expressionism,'” he recalled, laughing. “I didn’t walk up to Bruno and say, ‘Black-and-white, baby, what do you think?'”

“From the very beginning, (Coen) mentioned that he didn’t want to deny that the text was created as a play (and) theatrical construct,” he added. “We had no interest in making it as a naturalist film. He was not interested in going down the route (Roman) Polanski went,” citing the director’s 1971 film, shot around the British Isles.

Frances McDormand as Lady Macbeth in a scene from “The Tragedy of Macbeth.” Credit: Courtesy of Apple TV+ and A24

Inspiring references were plastered all over an office in the form of 3-by-5-inch prints of film stills, architecture shots and photography of Debonel’s own making. The keystone image was by photographer Hiroshi Sugimoto of the Luis Barragán house in Mexico City. Built in 1948, the late architect’s former home — now a UNESCO World Heritage site — is captured in the photo as an assembly of clean lines and hard surfaces softened ever so slightly by the focus.

“It became a benchmark for me to understand how abstract we were going to get,” Dechant said.

Left-right: A film still from F.W. Murnau’s “Sunrise” (1927) and Alex Hassell as Ross in a still from Joel Coen’s “The Tragedy of Macbeth.” Credit: Alamy/Stefan Dechant/Apple TV+

“The through line was simplifying the frame,” he explained. “It was almost like creating a haiku of imagery. It was, ‘How could we reduce it to the least amount of elements and still be evocative and immediate?'”

Macbeth’s ascent to the throne takes him from a battle camp to his castle in Inverness and ultimately to a castle in Dunsinane. Coen asked Dechant not to think of a castle, but the “idea of a castle.” How this manifests transports the film into the realm of the metatextual.

The raw edges and sparse set decoration are a nod to stage design, but the incompleteness of these spaces also become an extension of Lord and Lady Macbeth. These are characters who have imagined themselves on the throne, but never fleshed out the details of their reign. The dearth of imagination is reflected in bare walls, cold floors and high ceilings, these characters dwarfed by their station — a hollow castle for a hollow crown.

“There’s a haunting, empty quality,” said Dechant. “I think that Joel was probably working at that level, in terms of (Inverness is) not a home, because they can’t have heirs. And then you go to (Dunsinane) and it’s ill-fitting. There’s still an emptiness. It’s only one man seeking power, and his wife.”

A montage of illustrations and 3-D virtual models of sets created for “The Tragedy of Macbeth.” Credit: Courtesy Stefan Dechant/Apple TV+ and A24

Sets were designed using 3-D computer modeling, allowing Coen and Debonnel to run virtual walk-throughs of scenes and work out camera angles and movements before they were constructed. Some sets were roughly marked out on a soundstage or built with foam blocks and augmented to serve the text.

Dechant recalled McDormand pacing a mock corridor in preparation for a pivotal murder scene, reciting Macbeth’s corresponding soliloquy as she walked to make sure the space was long enough. Nailing that scene — and one of Shakespeare’s most famous passages — was vital, especially as production designer and director had conspired on a new interpretation.

The vision of a dagger Macbeth sees before him in most interpretations of the play appears here in the form of a door handle to his victim’s chamber, before he takes up his own blade. Dechant said Coen had shown him a 1903 portrait of banker JP Morgan sitting holding the arm of a chair — except in the light, it looked like Morgan was actually holding a dagger. The production designer played around with sculpting a metal door handle to achieve a similar effect. (Dechant eventually left the set with the final product and a chunk of the door as a souvenir.)

Another departure Coen makes is through his casting of stage star and contortionist Kathryn Hunter to play all three of the story’s iconic witches. At the height of the film’s inventiveness, when the witches return to Macbeth and recite their famous song, they do so inside Dunsinane castle — perched atop rafters in a spartan room — as water (all digital, admitted the production designer) floods the space.

“(The room) has no historic relevance,” said Dechant. “It was designed for one purpose: to be a cauldron.”

Kathryn Hunter as the three witches in “The Tragedy of Macbeth.” Credit: Courtesy of Apple TV+ and A24

Dechant said two versions of the apparition chamber were built, one full height for stunt performers, and one with just the rafters for Hunter’s close-ups. Credit: Jason T Clark/Apple TV+ and A24

There were other touches too: When Macbeth sees the ghost of his friend in a hallway, Dechant designed every arch to be “off balance, because so is Macbeth in his madness.” The fateful coming of the enemy to Dunsinane is foreshadowed by Dechant in the throne room, where columns were laid out with the same proportions as a colonnade of trees the invading forces would later pass through. The texture of the sets — highlighted by the absence of color — were designed to harmonize with costume designer Mary Zophres’ work.

Dechant, despite his proven track record, described his work in purely collaborative terms. He is quick to give credit, whether to Coen, Debonnel, the set decorators who painted shadow onto his sets to make the lighting pop, or the matte artists who painted landscapes to be inserted in post-production.

“Imagine if you came to work and everything looked like a piece of art when you walked into it?” he asked, smiling, looking like he still couldn’t believe his luck.

The crossroads set — the largest in the film — took over Studio 16 at the Warner Bros. lot. Credit: Jason T Clark/Apple TV+ and A24

“The Tragedy of Macbeth” is available on Apple TV+ on January 14.

“Throne of Blood” (1957)
Akira Kurosawa transported “Macbeth” to feudal Japan for a epic take on the warrior’s rise and fall. Toshiro Mifune and Isuzu Yamada star as the leads and dial the emotion all the way up. (See also: “Ran” [1985], Kurosawa’s take on “King Lear,” and “The Bad Sleep Well” [1960], his noirish adaptation of “Hamlet.”)

“10 Things I Hate About You” (1999)
Heath Ledger singing from the bleachers. Julia Styles’ teary poetry reading. Joseph Gordon-Levitt annoying everyone in sight. Gil Junger’s take on “The Taming of the Shrew,” with its American high school setting, had it all.

“Richard III” (1995)
Richard Loncraine’s adaptation takes the rise of a bad king and imagines it as a fascist coup in 1930s Britain. It’s worth a watch to see Ian McKellen letting it rip as one of Shakespeare’s most dastardly characters and its brilliant use of location (Battersea Power Station stands in for the Battle of Bosworth).

“Maqbool” (2003)
Another “Macbeth,” another original take. Vishal Bhardwaj set the play in Mumbai’s underground world of crime, while the late Irrfan Khan brought a great world-weariness to the troubled leader. Comparisons to “The Godfather” would not be misplaced.

“Chimes At Midnight” (1965)
Orson Welles shifted the focus from the royals in “Henry IV” and put the limelight on Sir John Falstaff. Welles certainly looked the part as the knight and troublemaker, but gave him a cunning edge too. And it wasn’t the last film to ramp up the character’s prominence (see: David Michôd’s 2019 film, “The King”).

What $1.4 Million Buys You in Californ

Sat Jan 15 , 2022
Sacramento | $1.385 Million A midcentury-modern house built in 1968, with three bedrooms and three bathrooms, on a 0.4-acre lot This house was designed by John Harvey Carter, an architect who designed more than 400 private and public buildings in the Sacramento area and served as a member of the […] 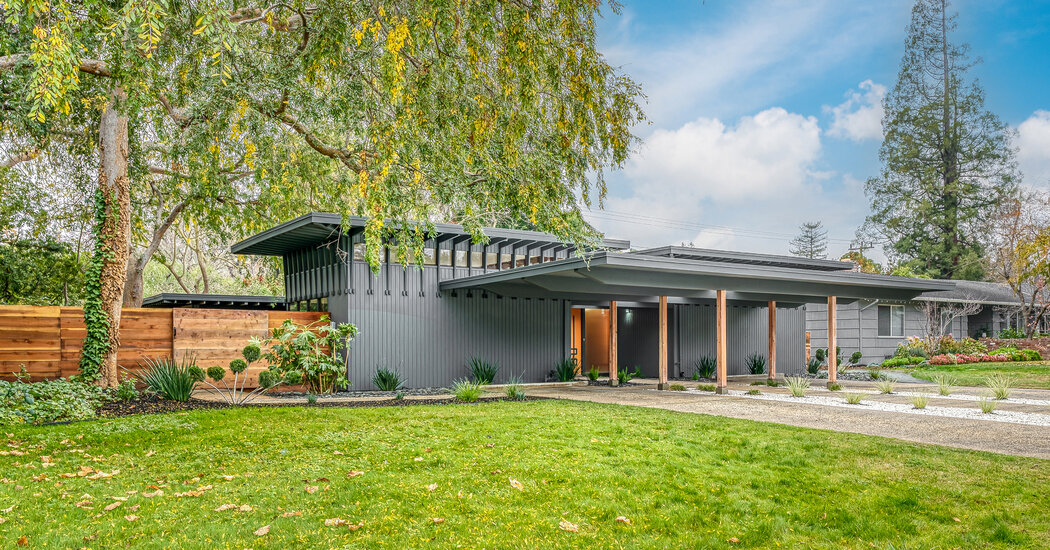