With Covid-19 causing delays in construction schedules and project openings, compiling CNN’s annual architecture lookahead has become a tricky business. Indeed, several entries in last year’s list (and even 2020’s) are yet to officially open their doors.

Regardless, the coming year promises — for now, at least — a slew of hotly anticipated new buildings, from Africa’s tallest skyscraper to a futuristic water bottling factory in Italy.

Notable for their design, potential cultural impact or the conversations they are likely to generate, here are 9 architecture projects to look forward to.

Perched above Sydney Harbour, the 19th-century Art Gallery of New South Wales is being reimagined as a series of stepped pavilions that mimic the surrounding landscape.

Dubbed Sydney Modern Project, the $250 million plan involves renovating the original building and creating an entirely new structure that will almost double the total exhibition area. The resulting new spaces include a gallery dedicated to Aboriginal and Torres Strait Islander art and another built into a decommissioned World War II naval oil tank.

The development marks an Australian debut for SANAA, the firm founded by Pritzker Prize-winning Japanese architects Kazuyo Sejima and Ryue Nishizawa. Their vision for the gallery includes a variety of public spaces, including an “art garden” and a plaza linking the old and new buildings. What’s more, the museum says that once the project completes later this year, there will be 70%  more trees planted on the site.

In 2017, Danish architecture firm Bjarke Ingels Group (BIG) won a design competition to renovate and expand the headquarters of Italian mineral water brand San Pellegrino. Nestled between the Brembo river and San Pellegrino Terme, the Italian town from which the company derives its name, the $102 million project’s contemporary arched design has seen it dubbed “Factory of the Future.”

Envisaged as both a bottling plant and visitor attraction, BIG’s serene design incorporates elements of classical Italian architecture, including arcades, porticos and a spacious piazza for staff and guests. A series of internal archways produce spaces of varying sizes, while opening up views of the surrounding valley. A “landmark” pillar, made from different strata of rock, will represent the mineral water’s journey from mountain to bottle.

Plant-covered high-rises — or “garden skyscrapers,” as they’re often known — have become an increasingly common sight in Europe since the completion of Milan’s Vertical Forest in 2014. And the phenomenon continues to gain traction around the world.

One of the latest examples, Qorner Tower, is to open in the Ecuadorian capital Quito later this year. Designed by Israeli-born architect Moshe Safdie’s eponymous firm, a Jenga tower-like configuration helps create stacked terraces for trees and plants across two of the tower’s faces. The north-facing facade will meanwhile feature a huge “living wall” populated with native plant species.

Square windows give the building Safdie’s characteristically pixelated appearance. And at 24 stories high, the tower will be among the tallest in the South American city — a fact that won’t be lost on residents using the tree-lined infinity pool on its roof.

Indian Prime Minister Narendra Modi’s Central Vista Redevelopment Project, a $1.8 billion overhaul of New Delhi’s historic center, has long been a source of heated debate in the country. But while critics have questioned the scheme’s cost and timing, few will deny that India’s colonial-era administrative buildings need modernizing.

A new parliament building stands at the heart of architecture firm HCP’s district plan. With its triangular form alluding to the sacred geometries of several religions, the building will contain two horseshoe-shaped chambers for the Rajya Sabha and Lok Sabha — the parliament’s upper and lower houses, respectively — and a light-filled Constitution Hall to display India’s written constitution.

With construction work on the site controversially deemed an “essential service” (and thus continuing throughout a nationwide pandemic lockdown last year), the race is on to finish the new parliament before the end of 2022, which will see India celebrating 75 years of independence from Britain.

Three decades after an art collective occupied Berlin’s historic Kunsthaus Tacheles to save it from demolition, the building is being transformed into a German outpost for the Fotografiska photography museum.

Responsibility for the delicate renovation job was handed to two architecture firms. Herzog & de Meuron, which has designed museums such as London’s Tate Modern and Hong Kong’s new M+, handled a major rooftop extension and an urban plan for the surrounding Am Tacheles neighborhood. Berlin firm Studio Aisslinger, meanwhile, was responsible for the interior of the 114-year-old building, which retains 1990s graffiti left behind by its former residents.

Complete with three floors of exhibition space, the museum will open in fall 2022.

The coastal city of Qinhuangdao, over 150 miles to Beijing’s east, has become an unlikely destination for architecture lovers in recent years. Its latest attraction is a cultural center designed by MAD Architects, the firm founded by the one-time Zaha Hadid protégé, Ma Yansong, who is also overseeing George Lucas’ long-awaited Museum of Narrative Art in LA.

Designed using the Chinese architect’s distinctive curves, the building’s polished exterior gives it the appearance of a shiny pebble reflecting the lush surroundings — or a “floating cloud by the sea,” as Ma’s firm described it in a press release. The center will comprise a theater and exhibition space, while a series of overhangs create cover for tranquil public spaces.

Iconic Tower is one of 18 skyscrapers planned for the Central Business District of Egypt’s new 6.5-million-person capital city, which is being built from scratch less than 30 miles east of Cairo.
Reaching 1,263 feet into the sky, the 80-story skyscraper will serve as the project’s visual centerpiece — and will be crowned Africa’s tallest building when it completes later this year. The design was inspired by the ancient pharaonic obelisks of Luxor, and features an illuminated crown intended to “convey a sense of strength and stability,” according to Dar Al-Handasah, the architecture and engineering firm behind the project.

The tower will be primarily used for private offices, though the Egyptian government is also relocating the country’s parliament and ministries to the ambitious new city.

After five years’ planning and almost 200 design submissions, images of the long-awaited Sandy Hook Permanent Memorial were unveiled last summer. Intended to remember and celebrate lives lost in the deadly elementary school shooting, the site in Newtown, Connecticut, will open to the public this December to mark the tragedy’s 10th anniversary.

Named “The Clearing” by the winning architects SWA Group, the 1.8-acre memorial will lead visitors through woodland and meadows via a network of circular paths. A water feature — with a sycamore tree planted at its center — will spiral inwards, reinforcing the circle theme pervading the thoughtful design.

“We wanted to acknowledge that the healing process does not end, but continues and grows,” said co-designer Daniel Affleck in a press statement.

In the eight years since Dutch architecture firm UNStudio won a competition to design Yongjia World Trade Centre, China has become increasingly intolerant of “weird” architecture on its skylines. For now, however, the country continues to be a canvas for experimental design concepts — in this case, a “green neighborhood in the sky.”
Inspired by the idea of precious objects standing on a tray, the towers are set across four separate riverside plots in the southeastern city of Wenzhou, in Zhejiang province. Each high-rise is composed of interlocking “frames” delineating the various vertical neighborhoods, while shared amenities like gardens and lounges will be found where the frames overlap. 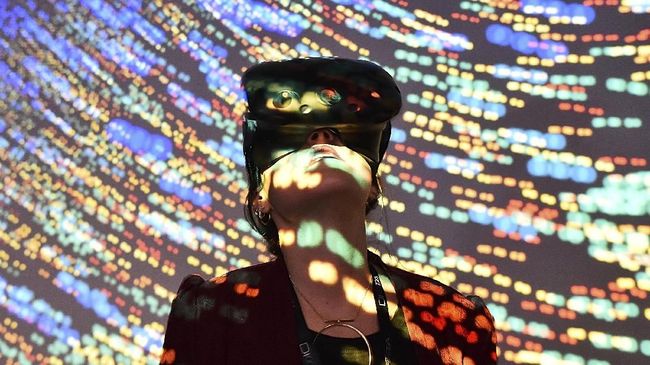