It has been two years since the Outsider Art Fair last gathered, over 60 galleries strong, at the Metropolitan Pavilion in Manhattan. But now it’s back and the atmosphere is, not surprisingly, celebratory.

Dealers are happy to see each other again. Many participants are showing new material, works that are not well known or completely unknown. Ask them. And the more familiar works by anointed masters look fantastic in the bigger booths near the entrance: James Castle, Joseph Yoakum, William Hawkins, Martín Ramírez. These booths belong to veteran galleries like Fleisher/Ollman (Booth A5), Carl Hammer (B6), Hirschl & Adler Modern (B8) and Ricco-Maresca (A11) that are responsible for building the field, and part of outsider history too.

Yet at the same time, as with so many things post-Covid, the fair feels different, maybe a little tense. Where is all this going? This is the fair’s 30th anniversary; it has been a tremendous success and all things concerning outsider art seem to be in motion, but is it simply going to be absorbed by the mainstream?

Its very definition has become more and more elastic, its separation from the “insider” art world blurred. What exactly is an outsider artist — who typically works in isolation without training and very little exposure to art — when the phenomenon is increasingly embraced by major galleries and museums and its greatest talents have entered the canon? It has become de rigueur for even non-major contemporary art galleries to represent at least one or two outsiders, as do relative newcomers to the fair like Nicelle Beauchene (B10), James Fuentes (D12), Fierman (A9) and Situations (A10).

Outsider art could not be stopped. Once its greatness — and its market potential — was understood, the insider art world opened the flood gates and here we are. You could say that the outsider fair is fighting back by going a bit elastic itself in ways that will probably be debated — at least until 2023.

The most visible sign of that elasticity is the exhibition “Field Trip: Psychedelic Solution, 1986-1995,”) the largest of four curated displays instigated by Andrew Edlin, the fair’s owner. It expands the outsider art category to include the similarly marginalized genre of psychedelic art — paintings, drawings and posters — that flourished in the Bay Area starting in the 1960s. Such material was the focus of Psychedelic Solution, a gallery known for its groundbreaking exhibitions, founded in the West Village in 1986 by Jacaeber Kastor, a West Coast transplant. The homage has been organized by Fred Tomaselli — himself the creator of some quite beautiful, trippy art. It contrasts color-oriented works like Joe Coleman’s recent portrait of Hunter S. Thompson and the abstractions of Olga Spiegel with a host of ink drawings, exuding varying degrees of intricacy and obsession by the likes of Robert Crumb, Bruce Conner, Jean Conner and less familiar artists like Peter Spoecker, Rick Shubb and Kastor himself, seen in a marvelously overgrown collaboration with his mother, Sue Kastor.

Acting on the slightly self-serving knowledge that an art dealer’s contribution to art history is frequently lost, Scott Ogden, Shrine’s owner and guiding spirit, has mounted a tribute to the outsider art dealer Luise Ross, who had a gallery in New York from 1982 to 2013, during which she — and others — were probably somewhat overshadowed by the formidable Phyllis Kind. This show is most interesting for early uncharacteristic works by Mose Tolliver and Minnie Evans, whom Ross was among the first to champion, along with Gayleen Aiken, the great undersung narrator of her own life. Paralleling the show, the gallery has assembled an online archive from Ross’s files featuring posters, announcements, letters and a timeline.

In essence, this group show stars the relatively unknown Della Wells, an amazing collagist born in 1951 who seems to take Romare Bearden as a point of departure. Working with small shards cut or torn from magazines she makes dense, sparkling and mosaic-like urban landscapes that are frequently occupied by a stylishly dressed woman. The results resemble Cubism accelerated for modern times. Wells’s backgrounds — especially her choppy blue skies — are often punctuated with small images, which make the air seem charged with memories.

In a section devoted to the work of Ralph Fasanella, the standout is a rare full-length portrait that should be in a museum. Ever the populist, Fasanella favored crowd scenes, but in “Seated Woman in a Yellow Dress,” from 1954, he gives us a regal Black woman lost in thought with a relative simplicity and clarifies his love of color and pattern. Also here are Fasanella’s small close-up portraits of subway riders, distinctive New York faces from midcentury, some of whom are dozing.

The art of Melvin Way was discovered by Andrew Castrucci, the founder of Bullet Space, and introduced to the public at the first Outsider Art Fair. Way is a great artist undeterred by mental illness and his insistence on remaining homeless. His small ink drawings — nearly 30 of which are on view — are at once mysterious and highly suggestive. Their pulsing lines and numbers resemble a merger of mathematical equations, molecular models and computer circuitry as well as atomic structures — they also seem to chart the energy of thought itself.

This nonprofit land preserve located in Sandersville, Ga. — a first-time participant here — devotes its limited display space to the peripatetic, relatively unknown art of Owen Lee (1922-2002). Into its also tiny booth at the fair, it has packed enough different kinds of works to be a group show. Most involve some colorfully opulent combination of painting, drawing and collage with an irrepressible vibrancy and resemblances to textiles being the through line.

Another first-timer to the fair, this Bronx nonprofit provides support for artists with disabilities. It is showcasing the relatively unknown work of Rayed Mohamed and Bin Feng. Influenced by Chinese landscape painting, Bin’s paintings on paper exude confidence and promise. Mohamed’s efforts — also painting on paper — are more developed and distinctive: expanses of saturated color built up from — or embedded with — small repeating marks that suggest maps, battle plans or a private language on the loose.

One of the fair’s most singular artifacts is a dozen or so pages from a small handmade booklet dated 1866 whose maker is as yet unidentified. Its wry ink drawings and fine script recount the story of a formerly enslaved family and their former owners after Emancipation reversed their fortunes. The smiling Black family prospered while the frowning whites, having lost substantial (human) property, fell on hard times, sometimes finding employment as nannies for their former servants.

The fair’s smallest curated exhibition, organized by the artists Eric White and Aaron Guadamuz, features the drawings of Bruce Bickford (1947-2019), an artist and animator. But it centers on Bickford’s personal obsession with the mystery-horror television series “Twin Peaks.” It is represented here by a detailed miniature model of the town, which was actually pieced together from locations around Los Angeles and Washington State — including but not limited to the town of Twin Peaks. Devotees of the series will recognize such landmarks as the Falls, the Gazebo and the Great Northern Hotel. The rest of us can savor the tenderness of the artist’s touch, the weathered palette and the lack of straight edges that, fittingly, give the place a life of its own.

Although not well-known as an outsider veteran, this Columbus, Ohio, gallery has been around for 24 years. Its roster is especially impressive for paintings of the enigmatic visionary, Morris Ben Newman (1883-1980) who claimed to be descended from Ethiopian royalty. In his luminous landscapes, the forms of trees, houses and terrain are naïve but united by lavish paint-handling that is a hallmark of a great artist.

Fri Mar 4 , 2022
Breadcrumb Trail Links Westcoast Homes and Design Featured Homes Design When Gillian Segal was approached to redesign this home, she was inspired by the owner’s love of art Art is a key feature of the space. Photo by Ema Peter /PNG Reviews and recommendations are unbiased and products are independently […] 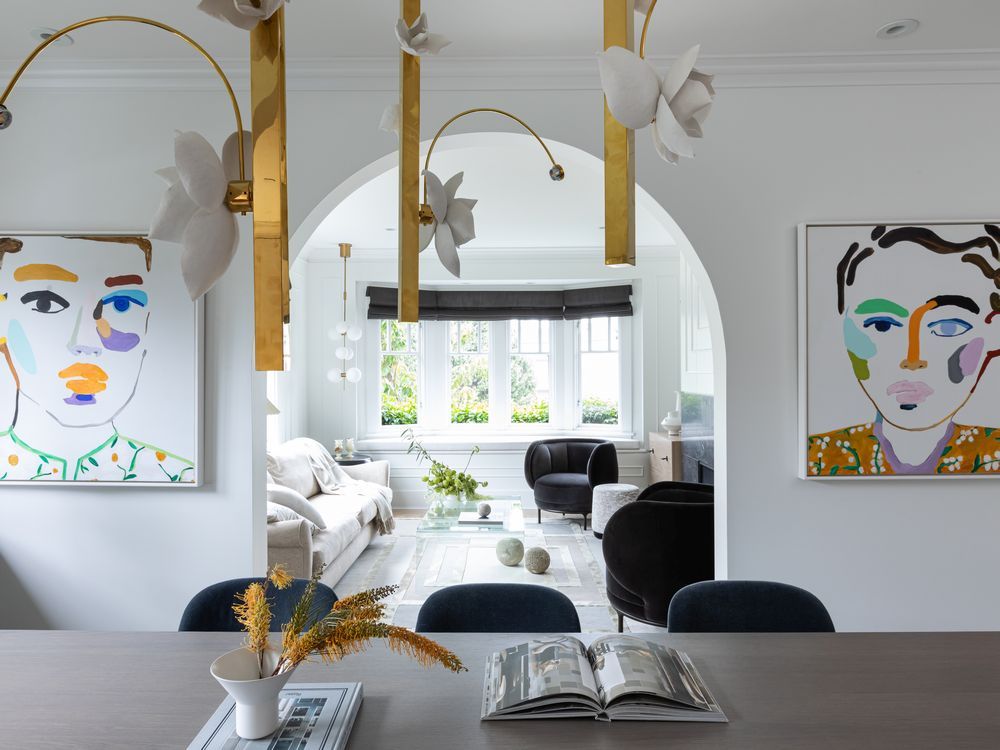