Fergus Scott opens our discussion with the admission that there is another Fergus Scott, a Sydney , who often gets his calls – our Fergus seems relieved not to get too many calls for the other, finding the delicious mix of sketches and concrete an infinitely preferable concern to that of his namesake.

After graduating in architecture from the University of Sydney in 1991, Fergus worked as a labourer on Peter Stutchbury’s Israel House. He found building a relief after the hothouse pressure of study, and worked further with builder Jeffrey Broadfield. After a good stint on the tools, he ended up working in Peter Stutchbury’s office before heading overseas.

Fergus started in Central America, soaking up the ancient sites of Mayan and Aztec architecture. The central USA was his next base, and he spent a lot of time looking at the Frank Lloyd Wright sites, with the echo of Grant Hildebrand and Swetik Korzeniewski drummed into his thinking from his student days.

His time in the USA was fertile, and he met and became influenced by Will Bruder, Rick Joy and Wendell Burnette. There were few houses there at the time that really celebrated a desert aesthetic – Wright’s Taliesin West was still a unique oddity, and cities like Phoenix sought to replicate the lushness of Miami rather than embrace desert materials. Buildings of rammed earth and adobe were still generally viewed as local or indigenous solutions. Rick Joy became a huge influence, leading Fergus to the work of Charles and Ray Eames, John Lautner and other west coast residential architects in Los Angeles and San Diego.

After returning to Australia in the late 1990s and a further stint detailing raw hardwood buildings for Peter Stutchbury (when he met Rick Leplastrier), he ventured out on his own in 2000, now with associate Caryn McCarthy.

Fergus Scott Architects’ first project, the Toumbaal Plains House in Yamba, northern New South Wales, was a simple family holiday house for friends. The land, near the coast but without a water view, was a place of cattle drives, of bare fields. Part of the brief was to find a way to get the clients’ kids to enjoy the landscape; the other part was to develop a sheltering house that spoke of the rudimentary detailing of timeless, pragmatic rural buildings. The resulting project is remarkably simple – early sketches remind one of rudimentary cattle shelters, a simple crucifix in plan with a nominal roof over parts, providing a corner in which to shelter from prevailing winds of any direction.

While each major project in the seventeen-year story of the office is very different, a clear thread winds back to this early project. Fergus’s work continues to be mostly outside of Sydney, and mostly driven by a response to a dramatic landscape. He doesn’t actively seek different types of work – he just works with the possibilities that come in – but clearly he enjoys, and is excited by, his role in landscape-defined projects. Fergus likes the fact that clients who are drawn to him are already appreciative of his skills. They understand that capturing the landscape in their project, engaging with their surroundings, is a critical part of working with their architect.

The Jilliby House, started after the success of Toumbaal, is sited in almost the opposite condition of its predecessor. The site is sunny, a valley floor, and Fergus has made a more permeable building, through which one can see the big stand of blue gums nestling against its back edge. The building is, in a way, simply a verandah between the forest and the field. The precast portals echo the tree trunks. There is a bit more structure than enclosure, again echoing the architect’s repeated sentiment of “only do what is necessary to the landscape.”

This looseness of touch with the landscape was then stretched further in the Quorrobolong House (see Houses 101). Again the site was fairly flat, but a history of subterranean mining of the area meant the solution was to let the site run through under the building, which is constructed on a platform on beams that meet the hillside. The spaces of the house are divided into public areas, where one can see over the land and the road, and more reclusive private spaces, which are shielded from public view. The “table,” or floor plane, is scored with expansion joints as a reminder of the watery vagary of the solid ground below.

The modesty and evenness of the landscape of the early houses prepared Fergus well for the rigours of working with more spectacular sites. The Southern House is on a dramatic headland near Bateman’s Bay, with a spectacular coastal panorama. In this house, one of the most important tasks was to stop things “shouting” too much, and therefore the architect’s role was partly to wield discipline over all aspects of the work – it was okay, indeed better, to avoid floor-to-ceiling glass walls to the sea.

The clients wanted to recognize the red soil and black granite of the area, and the maritime landscape invoked ideas of rusted steel or Corten. Fergus was able to experiment with a Rick Joy-style dry wall (but with stainless steel screws for the marine environment, and air gaps to ventilate the cladding). By building along the contours and controlling the size of openings, Fergus has kinked the building to capture specific views. Protected outdoor areas adjacent and between rooms are sheltered from wind coming from various directions. The contained outdoor spaces – one of which is a sand garden – echo a rusting shipwreck marooned on a beach.

The Farm (see Houses 113) is the practice’s most recently awarded exploration of this theme of “house in beautiful coastal dairy landscape.” Its palette is even more stripped back than his previous coastal projects – all rammed earth walls, rising in blades from a moulded, modified grass terrain, like a series of found sedimentary rock outcrops or ancient castle battlements. The floors and deck edges and the sometimes-visible foundations are cast in concrete, as are the heavy, overhanging, shady roof forms. Bedrooms, which are buried in the ground, are monastic and the shared living spaces are luxuriously lined with weathered timber joinery and ceilings and raw steel benchtops. As with all of his projects, Fergus has enclosed a protected outdoor eyrie between the wings, in this case with a large pool and grass mounds. Each side of this space is flanked by retractable sliding screens that also enclose walkways when the owners are away or the weather is inclement. This house, and indeed all of Fergus Scott Architects’ work, is careful yet generous in spirit; its houses are often of spartan materials yet made to feel very rich to the senses.

10 Ways to Cool Down a Room Fast Without AC

Sun May 29 , 2022
Window fans, ceiling fans, and tower fans can all help cool down a room if you use them correctly.  To keep your room cool all day, cover your windows to prevent heat from sunlight.  Reducing humidity, blocking air leaks, and ventilating out hot air can all help cool your home.   […] 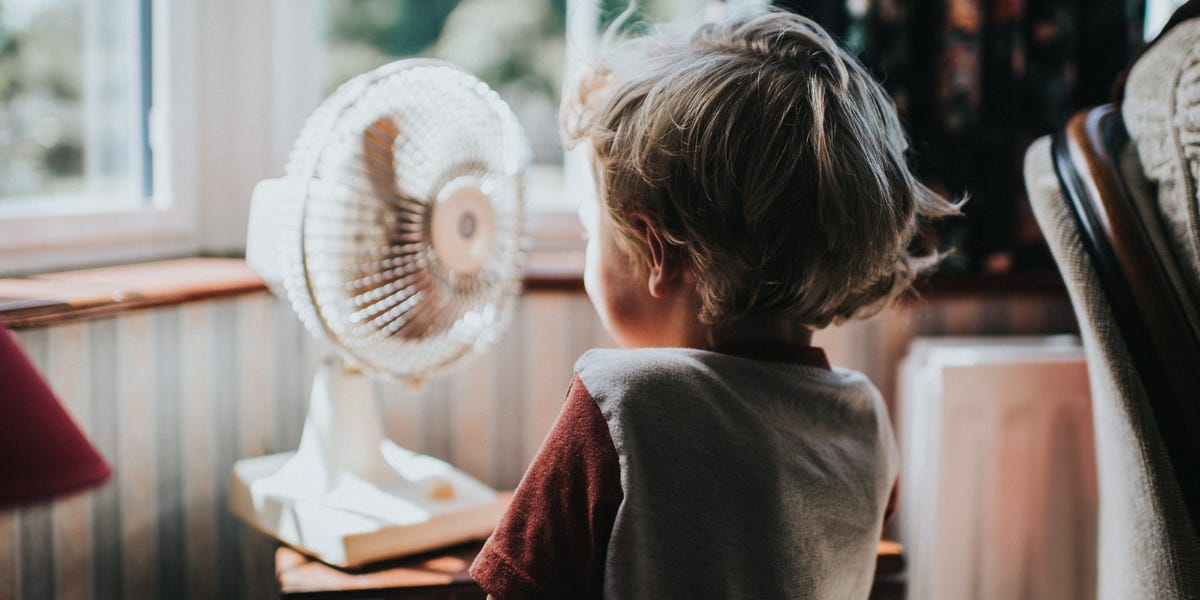