Pierro filly and first starter 12. Rhone has found an ideal and very modest target to start her career behind two nice trials. Jumps from the inside with winkers on, and most of these have barely managed a place from several attempts.

Dangers: Not so, though emerging filly 11. Ms Nerfertiti who boxed on okay from the front on debut in tougher provincial grade when unwanted in betting; while 9. Love Loch and 2. Perfect Point can both run into the placings.

Same graded affair at set weights, and two provincial runners rate well clear of the rest. Like resuming filly 5. Collier Bay with blinkers being added. Has been well fitted with two progressive trials, and the provincial stable is one of the best around at placing them early in the prep.

Dangers: Another improving provincial three-year-old 4. Threetimeslucky can peak fourth-up, and is the clear threat. Has worked home into a place in his last two, heavily backed last time here when he took too long to pick up from midfield. Keep safe 2. Razzama at each-way odds third-up; while 1. Pontoon Pete is hard-fit deep into the prep and draws inside.

How to play it: Collier Bay to win
Odds and Evens: Split

Coffs three-year-old 1. Honourable is ready to strike at his fourth start. Hasn’t missed a place so far, and boxed on for a long way in front here in a race with more depth.

Dangers: Expecting a big first-up run from 2. Kimwantstogetahead despite the wide draw. Hit the line impressively from well back here on debut four months ago, and fitted with two solid trials, winning the latest over Collier Bay who is fancied in the previous. Also preferred here to Mudgee on Sunday. Honest mare 12. Percontation is still searching for a breakthrough win ahead of her 13th start, but she’s been placed seven times, and often runs better than her market rating suggests. Comes back in distance carrying 2kg less, and this is fairly weak. Included in wider exotics 14. My Sonny’s Faith fourth-up; and 13. Casino Silk carrying her lightest weight in a long time.

How to play it: Honourable to win
Odds and Evens: Split

Like three-year-old ex-Victorian filly 9. Sophistication having her first run for the Nathan Doyle stable at Newcastle off a six-week break. Progressed steadily south of the border winning her maiden three starts back, and this yard has an almost uncanny knack of producing immediate improvement. Should get a nice soft trail off the speed.

Dangers: Plenty of them headed by rival Novacastrian 4. Yorkiri who charged home to claim his maiden in heavy ground fourth-up. Despite a horror draw, 5. In Hot Water continues to improve. Claimed her maiden here in dominant fashion from off the speed, and is on the seven day back-up. Another last start third-up winner 8. Kiss Her draws inside carrying 1kg less; while 2. Sippin Seasons is a knock-out chance in suitable ground.

How to play it: Sophistication to win
Odds and Evens: Split

Provincial three-year-old 4. Trinity Missile hasn’t reached the expected heights, with only one win from 12 starts, but this is a significant drop in quality. Yet to fully prove himself on heavy ground, but finishing just over three lengths from Mentalism and Wild Chap, who bolted in a stronger metro race five days ago, in a Wyong BM 64 is way better than this.

Dangers: Another former Victorian having his first run in this region 3. Mariinsky is well placed with a 2kg claim from a handy draw. Keep safe last start provincial maiden winner at big odds 1. Emerald’s Son who draws to get a soft trail back in the field; while 11. Rapid Rose also shoots for two straight wins a month between runs.

How to play it: Trinity Missile to win
Odds and Evens: Split

Consistent provincial four-year-old 11. The Mistral hasn’t missed a place in his last three, and is ready to win again fifth-up. Loves to roll to the front, and comes through a couple of races that served up more depth than this.

How to play it: The Mistral to win
Odds and Evens: Odds

News, results and expert analysis from the weekend of sport sent every Monday. Sign up for our Sport newsletter.

Wisconsin Union to host graduation festivities for the Class of 2022

Mon May 9 , 2022
The University of Wisconsin-Madison Union team will host a variety of festivities from May 8 to May 14 for the upcoming graduates. The Class of 2022 accomplished many incredible feats in their time at UW-Madison, and staff around campus want to ensure they feel celebrated and appreciated.  “The Union’s graduation […] 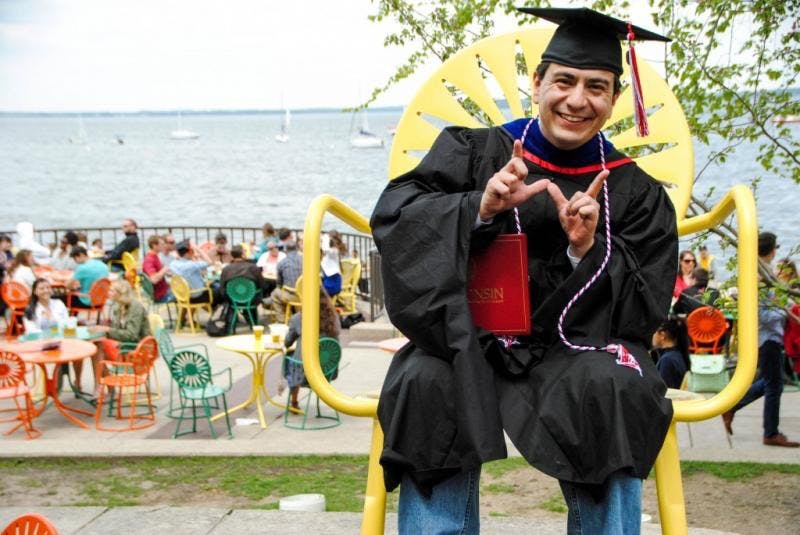