A property hunter has been left amused and baffled by the creative language used by estate agents trying to attract potential buyers with a small ‘garden’ that’s barely the size of a shower cubicle.

Luke Neve, who lives in Sheffield, spotted a one-bedroom property in Hunters Bar on Right Move, and tweeted a photo of the backyard writing: ‘Just found a house on Right Move with this gorgeous ‘private compact courtyard garden’.

The image shows a set of double doors opening on to a small patch of decking, with two plants placed on either side of the back wall, which looks to be not much more than 2st away/

The property on sale for £185,000 boasts of spanning over three floors that offer a ‘light, spacious and contemporary feel’

Luke’s post went viral on Twitter after racking up over 13,000 likes, with many sharing photos of other quirky small properties.

Luke Neve, who lives in Sheffield, has sparked a viral thread about properties with small spaces after spotting a ‘compact’ garden (pictured) on a Right Move listing 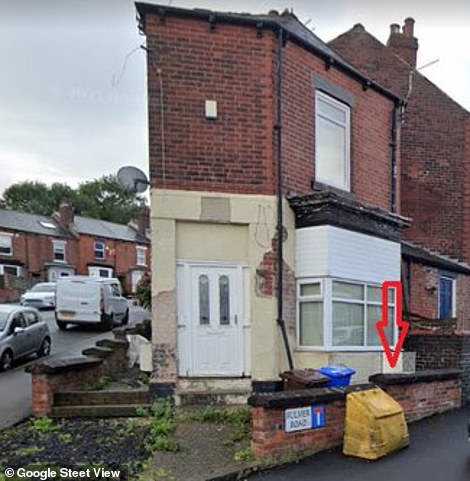 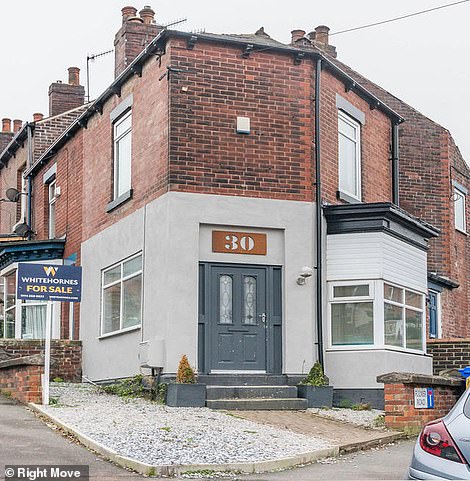 The property in Hunters Bar which has been renovated since 2020 (pictured left) has left many questioning the ‘garden space’. One even found a picture of what it jused to look like, so they could point out where the ‘courtyard’ had been added. Pictured right: The terraced house now, after being renovated

Luke shared a link to the terraced house which had two previous owners before a third modernised the property to increase its value.

A Google street view captured in 2020 shows the front of the house has recently been given a new lease of life with paint and the neglected garden swapped for paving.

Meanwhile the interior has brightly lit rooms that appear to have been decorated with white walls for a polished look.

The estate agent claims the house is suitable for ‘city workers and commuters alike’.

Unimpressed by the garden, Luke tweeted: ‘I’m convinced that whoever wrote this has lost it: ‘super quirky and individually designed one double bedroomed, bay windowed terraced property”

One twitter user admitted they were also shocked by the advert, writing: Oh Luke, man, I didn’t expect that in Hunters Bar in England’s greenest city!’ 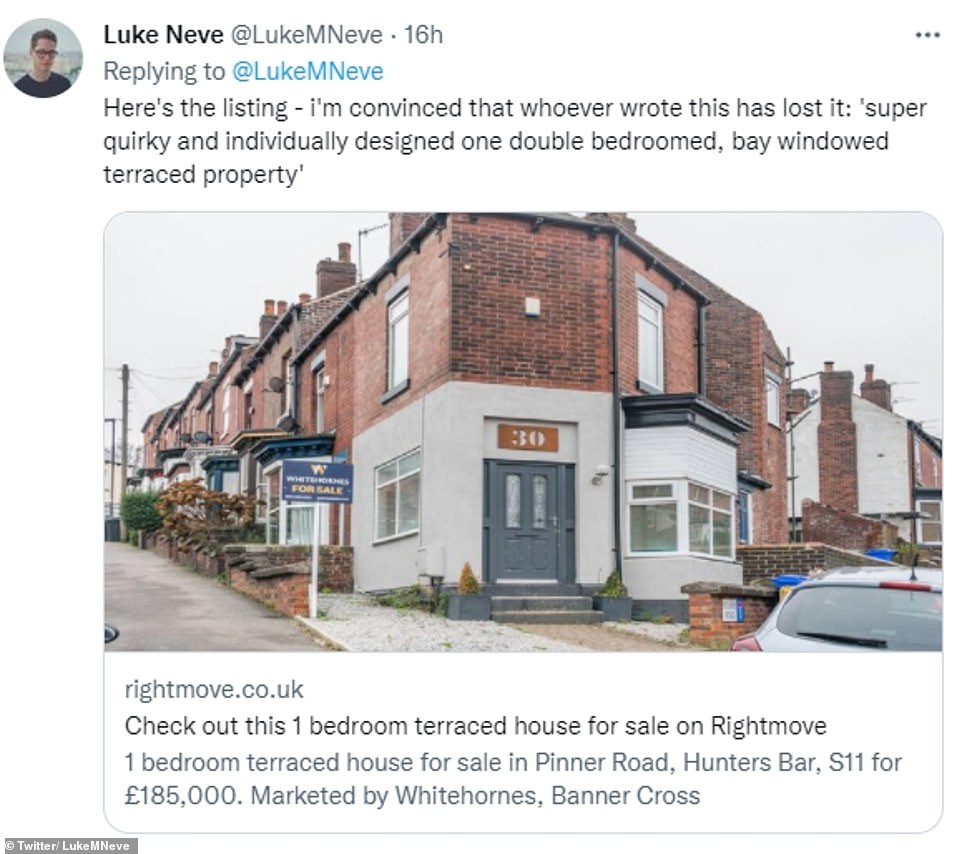 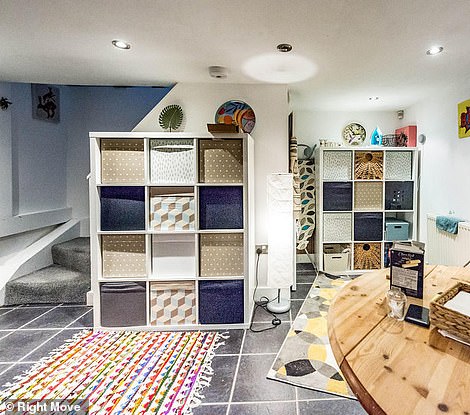 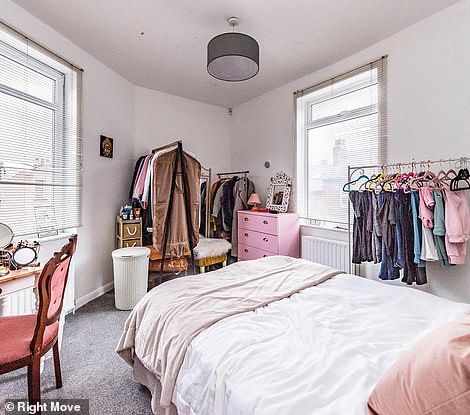 Despite the quirky garden, photos of the interior of the property show brightly lit rooms with modern furnishing

Responses to Luke’s tweet joked that the garden is ‘unique’, however they aren’t sure why the estate agent boasted about the house being in a great area for children

Another joked: ”An incredibly rare opportunity has arisen to purchase…’ They’re not kidding!!! I’d go as far as to say unique opportunity… there can’t be another ‘private compact courtyard garden’ like that anywhere!’

Finding other issues with the listing, a third wrote: ‘I love how it talks about the area being great for children, with play-parks, nurseries, schools etc. Sorry, where the f*** am I storing the child in this property? The open air, timber decking clad, child containment cell?’

The thread conjured up a memory for one Twitter user who revealed a 7ft-wide house was sold in her area for around £235,000 in 2014, while another dubbed a freehold studio in Chelsea that was advertised as a one-bedroom house for £395,000 ‘insane’.

The colourful, no longer available property which was eye-wateringly expensive had been listed as in need of refurbishment. 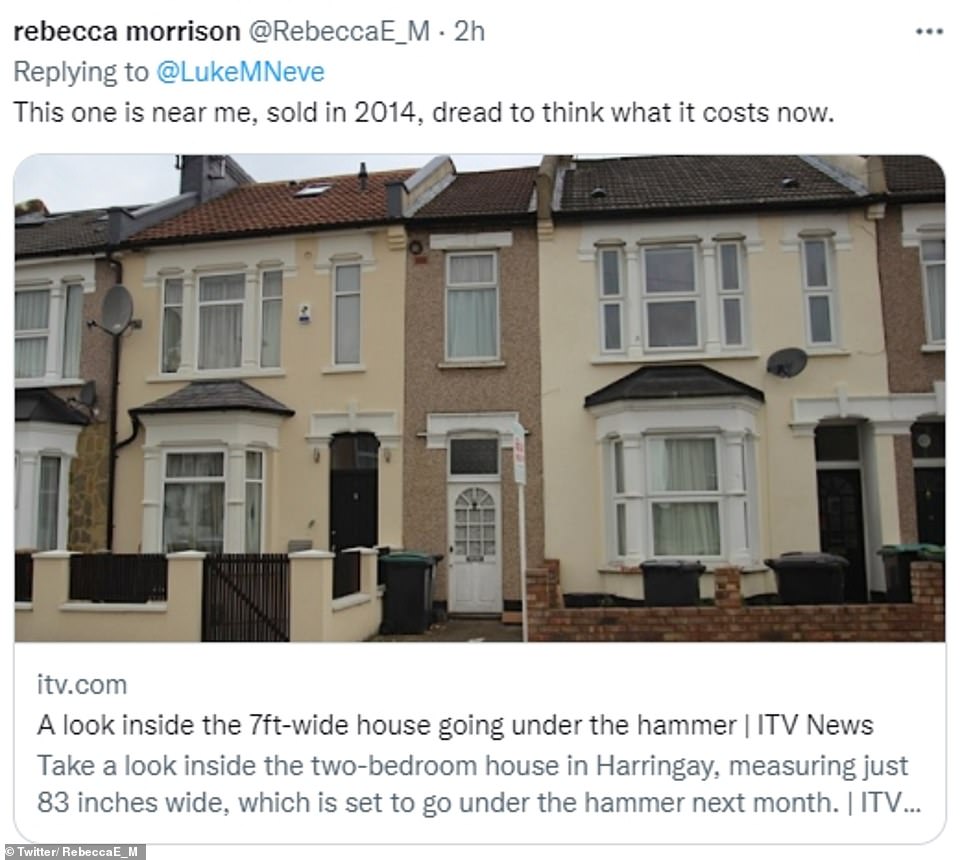 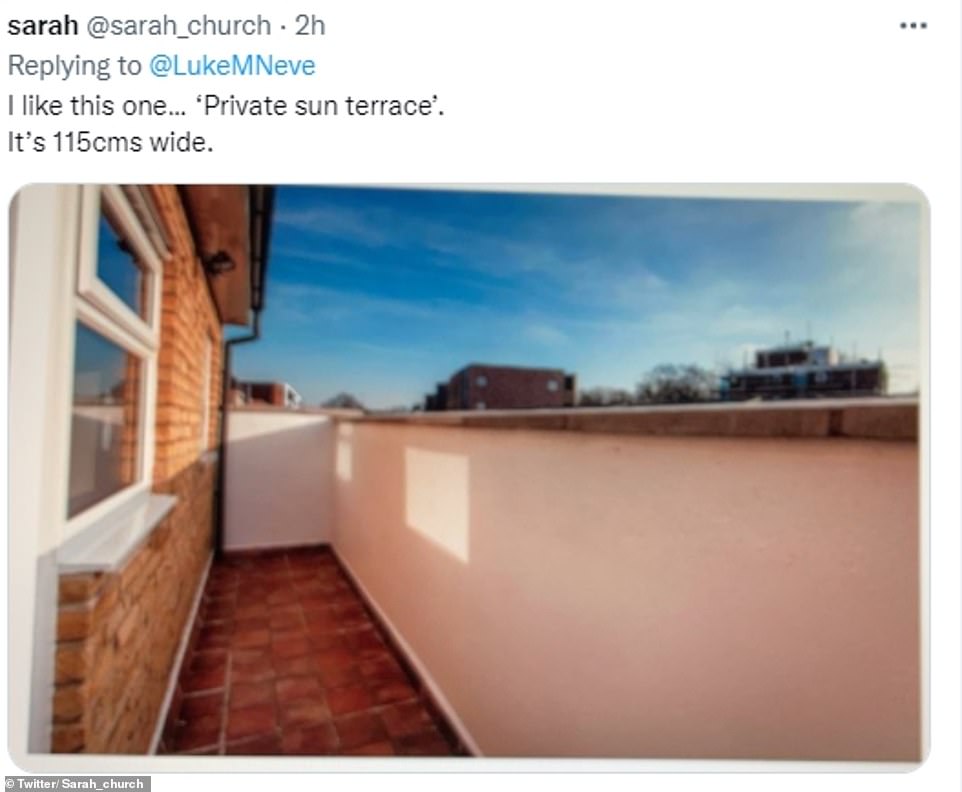 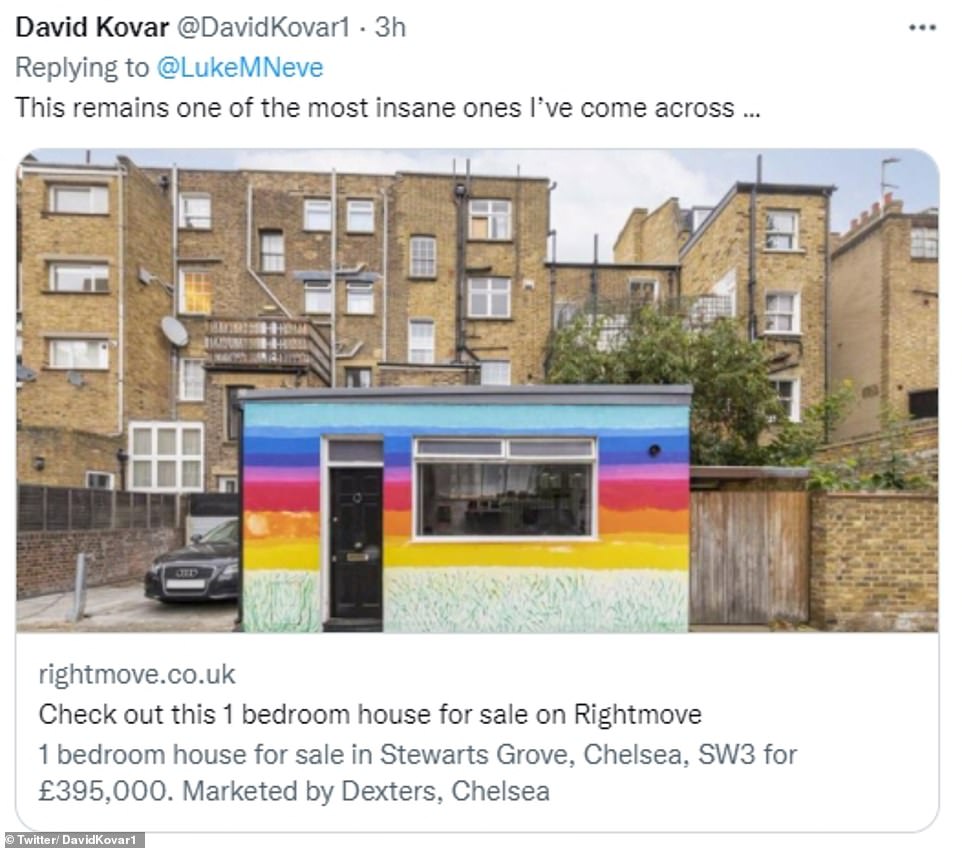 Others shared that they viewed disappointing properties after being impressed by descriptive online listings.

One wrote: ‘I had a similar experience. Looked at flat/w ‘wrap around balcony’. Access was climbing out a window to stand in guttering. When we arrived the estate agent said ‘manage your expectations’. Also had a spiral staircase too small for furniture so if bought you had to hire a crane’

Another said: ‘We viewed a flat in London with a ‘private roof terrace’. When we got there, the ‘terrace’ was accessed by climbing out a window to stand on the roof of a neighbouring flat. When I questioned how they were selling access to someone else’s roof they said it must have been a mistake’

A third added: ‘When we bought our house the gravel pit in the backyard was advertised as ‘garden that has been landscaped for easy maintenance’ 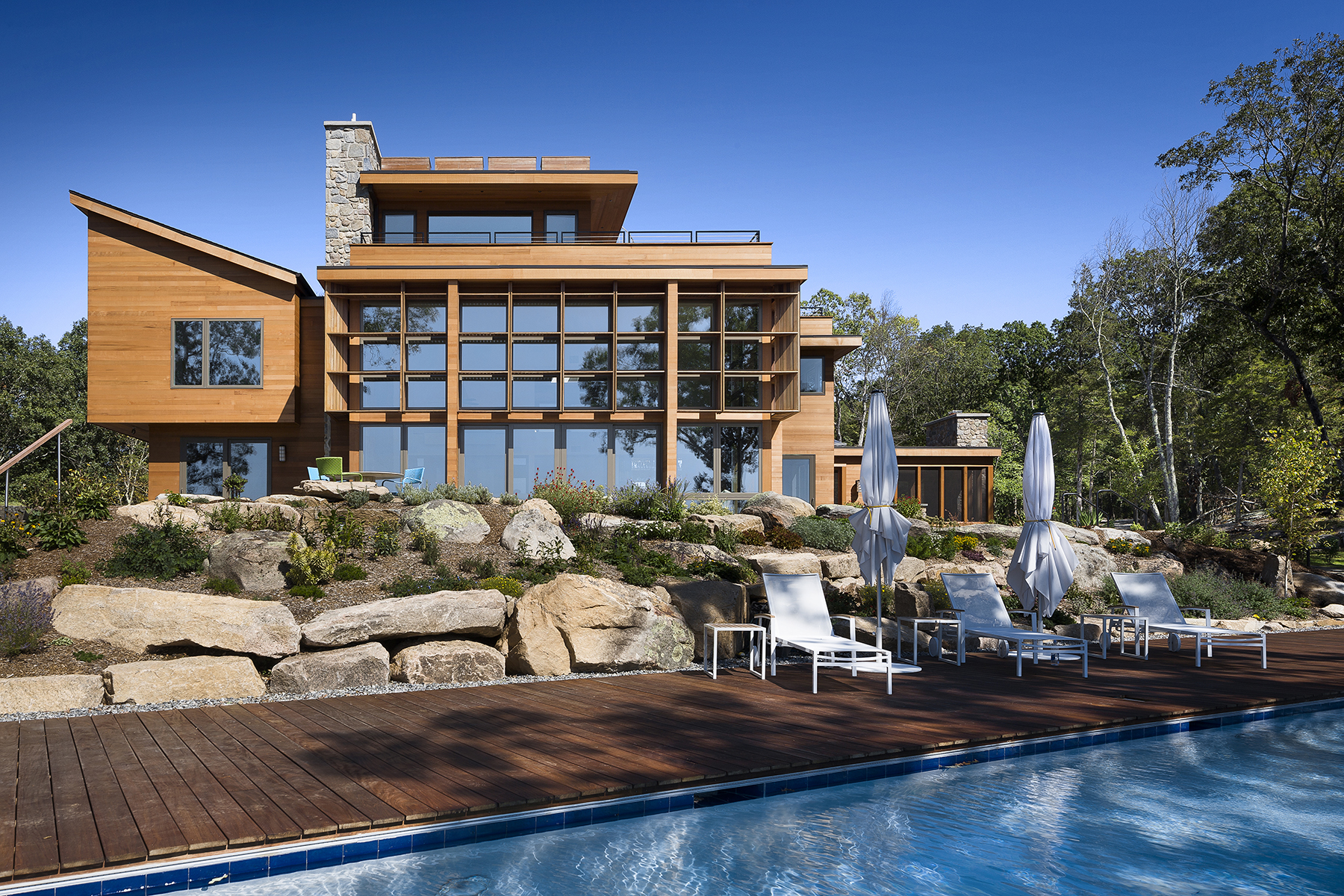