Production designer Curt Beech tells IndieWire he was paid the ultimate compliment when Martin Short walked into his character’s apartment: “He said ‘Oh wait, I’ve been here before.’”

The Hulu series “Only Murders in the Building” is a contemporary murder mystery that makes the most of its modern day New York setting, but what really brings it to life is the sense of history that informs every frame. When we meet new characters — be they protagonists Charles (Steve Martin), Oliver (Martin Short), and Mabel (Selena Gomez) or day players who only appear in a scene or two — their surroundings instantly give a sense of who they are and where they’ve been as the stories of their lives are told through carefully chosen visual details. Oliver, for example, is a down on his luck stage director whose career arc can be traced in the posters on his walls, and whose timeline of success is indicated by the décor — we can see that at one point he had the money to upgrade his apartment, but the dated furnishings indicate that this renovation occurred many years in the past.

This approach to Oliver’s home as an expression of character is the work of production designer Curt Beech, who took a similarly thoughtful approach to each of the apartments in the Arconia, a fictional Upper West Side building that serves as home to most of the action in “Only Murders in the Building” and which is based on Beech’s research into its real-life counterparts. “Everything I do comes from research,” Beech told IndieWire. “I’m only as good as my library.” He began his work on “Only Murders” by looking at the original ground plans for structures like the Arconia and then examining how the buildings had changed. “I thought about how people add on to their existing apartments as time goes by, or someone passes away or a family moves out and so the person next door adds on their apartment.”

“Only Murders in the Building”

In Beech’s mind, Mabel’s apartment was the closest to the Arconia’s original plan while Charles’ place had been thoroughly reworked. “This is largely based on people’s resources,” Beech explained. “Mabel has no resources so she’s not able to do anything, but Charles was smart with his money and invested wisely and his apartment tells that story. It’s completely modernized, and the art on the walls shows that he has taste and money as well.” Martin contributed ideas for paintings and furniture pieces that he thought Charles would own, while Short paid the production designer the ultimate compliment when he first stepped into his apartment set. “He said ‘Oh wait, I’ve been here before.’ He knew that apartment from his theatrical friends. And then Steve was mad because he thought Oliver’s apartment was nicer than his, which was good because we created a little rivalry between the two of them.”

Beech’s attention to detail extended to the supporting characters as well. Some of the show’s biggest laughs come from the character of Howard (Michael Cyril Creighton), a cat lover who Charles, Oliver, and Mabel suspect is a murderer; the comedy emanates not only from Creighton’s hilarious performance, but also from the the visual shorthand of Beech’s set design. “The story we’re telling is that it was probably his mother’s apartment, and after she died all he did was get cats,” Beech said. “He didn’t do anything to the apartment in the interim. So we just added cat layer upon cat layer with real cat hair and bad cat art on the walls. All of these things added up and gave a sense of the character very quickly, which is key because you don’t have as much time to establish some of these supporting characters. You have to know them the second you walk into their place.”

Only Murders in the Building
Craig Blankenhorn/Hulu

Although “Only Murders in the Building” boasts fine New York location work in addition to its sets, COVID required that most of the show be built on a stage, which allowed Beech to  yield the show’s cohesive design. “The pandemic actually helped us enormously because we were able to define all of these spaces and keep them under our control,” Beech said. “It gave us a much broader canvas to paint on because it was all our canvas.” The result was that Beech was able to differentiate between the apartments yet give them all a warm and comforting look. “Even the bad guy’s apartment is inviting. When you walk into the foyer you don’t know it’s the home of a killer.”

The control Beech possessed also allowed him to give a greater sense of the integration of all the various sets. “I don’t think this story could take place in Tucson,” Beech said. “The whole idea of New York is that everyone is stacked in these boxes on top of each other having to interact and live together. You take the same elevator and walk in through the same lobby — it’s unavoidable and horrible and wonderful all at the same time.” Ultimately, Beech was able to achieve what he always strives for in his production design: a sweet spot between story, authenticity, and visual beauty. “The design ideal is in the middle of that Venn diagram. If a location looks great but it doesn’t serve the story or it isn’t authentic, it won’t work. And if it’s too real, that can be a problem too if it isn’t serving the dramatic needs. We’re always trying to make those three things match up.”

Sign Up: Stay on top of the latest breaking film and TV news! Sign up for our Email Newsletters here.

‘Only Murders in the Building’: Production Design to Die for

Thu May 19 , 2022
Ecuadorian architects Juan Alberto Andrade and María José Váscones have transformed a 27.5-sq-m (296-sq-ft) space into a full-featured compact home, which is jam-packed with space-saving and multi-purpose furnishings. Dubbed Domestico, the tiny apartment can accommodate two adults and is designed to seamlessly transform over the arc of 24 hours: from […] 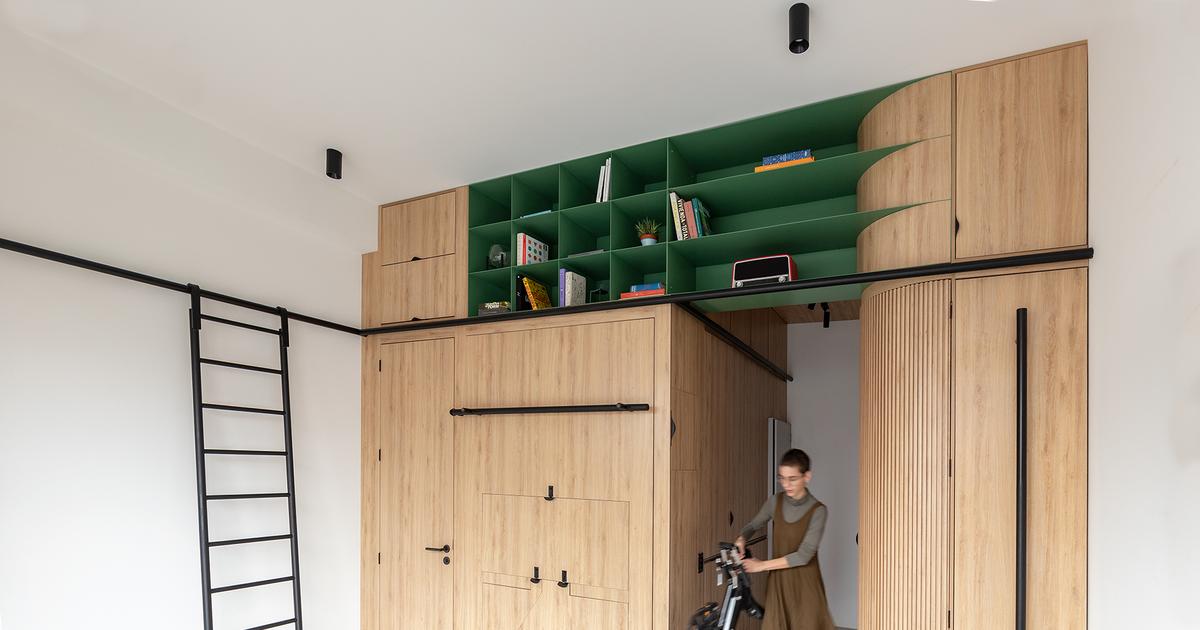