As many of you are aware, our public safety community lost a brave and dedicated public servant on Saturday evening, February 19, when Huntington Beach Police officer Nicholas Vella was killed in a tragic helicopter accident while responding to a call in Newport Beach.

Officer Vella is survived by his wife and teenage daughter. If you would like to donate to support his family, please use the official donation site sanctioned by his family and the City of Huntington Beach: https://porac.org/fundraiser/support-officer-vella-his-family/?utm_medium=email&utm_source=govdelivery.

On Monday, February 21, the OC Health Care Agency, Environmental Health Division, closed the ocean water area of the west end of Newport Bay from 8th Street due to a sewage spill. The spill was caused by a blocked sewer line from a restaurant in Newport Bay. Once the County and City were notified of the spill, crews from the City’s Utilities Department and the County were deployed immediately to shut off the water, sandbag the storm drain and clean the area.

Initial estimates of 35,000 to 50,000 gallons of sewage entering the harbor have been lowered to 5,000 gallons based on a closer analysis of water use data. However, the affected ocean water area will remain closed to swimming, surfing, and diving until the results of follow-up water quality monitoring meet acceptable standards.

Maintaining the quality of ocean and harbor waters is a top priority for the City of Newport Beach. The City maintains a proactive effort to inspect restaurant grease interceptors annually and educate restaurant owners and managers on best practices to stop food waste from entering sewers and storm drains. More information on the Fats, Oils and Grease Inspection and Education program can be found on the City’s web site at https://www.newportbeachca.gov/government/departments/utilities/wastewater/fog-control-program?utm_medium=email&utm_source=govdelivery.

A new mobile crisis intervention program to address mental health issues in the community is up and running in Newport Beach as of this week.

The Be Well OC Mobile Crisis Response Team is working closely with the City’s public safety departments to address mental health challenges among the city’s homeless population, as well as residents and visitors who may be experiencing a mental health crisis.

Be Well OC works with some other Orange County cities on similar programs and is now a new partnership for Newport Beach.

Under the Be Well OC program, Newport Beach has a dedicated two-person team of experienced crisis counselors and paramedics working 12 hours a day, 7 days a week. The team responds to mental health calls for service to the Police Department’s non-emergency or 911 call lines. Patients may be transported to Be Well OC’s local crisis center, or a detox facility or shelter, as needed. The service provides direct mental health intervention and will reduce the need for police and emergency medical services in these cases.

The program’s first-year cost, about $1.2 million, is being offset by an anonymous donation from a Newport Beach resident of $132,000 for the mobile van and start-up costs. Federal grants will be used to fund about $717,000, and the remaining $376,000 will come from funding currently allocated for homeless shelter operations. City staff is pursuing grants, additional donations, and other cost-sharing opportunities to offset future costs.

The Be Well OC program supplements and augments the City’s current efforts to address homelessness, which include a shelter partnership with the City of Costa Mesa, and a pilot program that is providing volunteer opportunities for individuals experiencing homelessness to learn and/or rebuild job skills and a path toward stable employment and housing.

The East Coast Highway Street Rehabilitation project is progressing on schedule. This project starts at MacArthur Boulevard and ends at Newport Coast Drive. Marguerite Avenue from Bayside Drive to 5th Avenue will also be rehabilitated as part of this project.

Concrete removal and reconstruction began in early February.  The contractor has made swift progress and has completed most of the concrete work on the ocean side of East Coast Highway. Concrete work on this side is scheduled to be completed in two weeks. The contractor will then switch to the inland side to complete similar concrete improvements. City staff is closely monitoring the construction progress and traffic impacts. The contractor is required to phase their work to minimize public inconvenience and City Staff can adjust signal timings to help with traffic flow. Upon completion of concrete improvements, the asphalt pavement will be overlaid and restriped.

East Coast Highway is an older highway that was once owned and maintained by the State of California. This portion of the highway was relinquished to the City in 2004. Many of the existing improvements have deteriorated or do not meet current design standards. Extensive concrete improvements, such as curb access ramps, sidewalks, and gutters, are needed. The Public Works Department would like to thank the residents and business owners for your patience and understanding as we complete this challenging and much needed project.

In a corner of Irvine Terrace Park overlooking the harbor and the ocean is the “Sister City Garden” where sculptures and benches reside to commemorate the friendship between Newport Balboa Rotary Club and the Rotary Club of Okazaki South in Japan. The “Sister City” was formalized in November 1984 because of this friendship through the Newport Beach Sister Cities Association (NBSCA). Okazaki is located 200 miles west of Tokyo and has a population of over 350,000 and is best known for its production of stonework, miso, fireworks, centers for automobile, and biological research.

Deteriorating wooden monument signs along the planters were replaced with aluminum replicating granite stone. The City looks forward to continued growth in our relationship with our “Sister City” to maintain and cherish these landscape features and amenities.

Some kids may not have gone to the mountains during their weeklong holiday break from school, so City staff brought 10 tons of snow to them for President’s Week Camp! Campers bundled up and enjoyed sledding and snow play in Grant Howald Park. In addition to a snow day, over 55 participants enjoyed a full week of staff-led activities, crafts and games held at the Community Youth Center.

The distribution of new, green-lid carts for recycling organic materials (yard waste, food waste and other biodegradable items) is underway through the end of March. Pickup of organic recycling will begin the week after the organics carts are delivered, on the same day as trash and standard recycling are collected.

For information on the state-mandated organics recycling program, please utilize the following resources:

Street sweeping days have also been adjusted in the neighborhoods with collection day changes. These neighborhoods include portions of the Balboa Peninsula (21st Street to G Street) and Corona del Mar (north of Coast Highway), Irvine Terrance, the Port Streets and the north tip of Newport Heights. These changes will avoid conflicts, address parking conditions, and maintain street sweeping effectiveness. For maps and information visit www.newportbeachca.gov/2022sweeping or call the City’s Utilities Department at (949) 644-3011.

Residents Encouraged to Apply for Aviation Committee, Building and Fire Board of Appeals

The City is seeking community representatives from Council District 1 to fill an unscheduled vacancy on the Aviation Committee.

The City is also seeking applications for an unscheduled vacancy on the Building and Fire Board of Appeals. Applications will be accepted until Friday, March 4 at noon.

Self-collection, at-home COVID-19 Test Kits are available at no cost to people who work or live in Orange County, and can be ordered online at www.ochealthinfo.com/covidtest.  In addition, free tests are now available from the federal government through www.COVIDtests.gov or by calling (800) 232-0233. You can order up to four rapid tests to be sent to your home address, which will be mailed at no cost through the U.S. Postal Service within 7 to 12 days.

To get vaccinated, you can visit a local pharmacy or healthcare provider, or schedule an appointment at www.Vaccines.gov, www.MyTurn.ca.gov or www.Othena.com.

For more information and resources, including case counts, vaccination and testing in Orange County, visit www.ochealthinfo.com/covid.

To donate to those experiencing homelessness in Newport Beach, please visit our Good Giving Program web page at https://newportbeachca.gov/trending/community-issues/homelessness/how-you-can-help?utm_medium=email&utm_source=govdelivery

Sun Feb 27 , 2022
Larry David’s new California pad is pretty, pretty, pretty good! The “Curb Your Enthusiasm” star is getting in on the Montecito frenzy by purchasing an idyllic 1920s French Normandy-style cottage for $5.7 million in the neighborhood. Closing on the deal back in October, the four-bedroom, 4.5 bathroom abode was originally […] 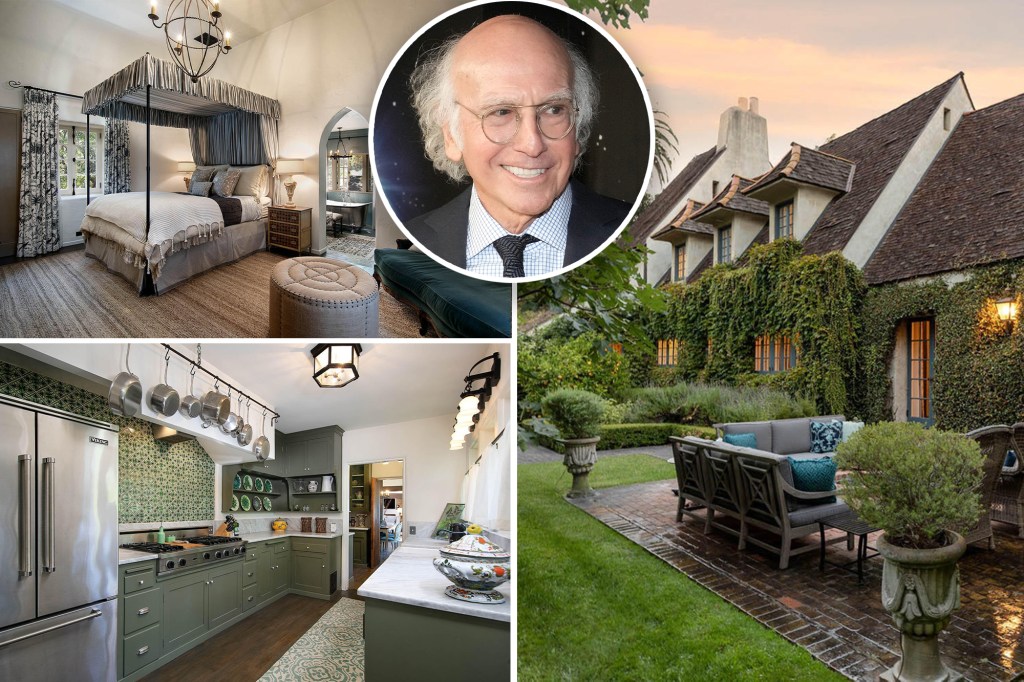