“Real estate,” Claudia Steinberg said, “in a way, it determines your life.”

Ms. Steinberg began navigating this reality in 1980 as a 24-year-old immigrant from Germany. It was her first time in New York; most of her life had been spent in Essen, an industrial city near the Dutch border. “But my family was very unconventional,” she said. “We’re bohemian people. And I always wanted to live abroad because I had the typical postwar leftist hatred for my country and thought I can’t live in a country with a history like this.”

She was thinking about Paris, but her boyfriend at the time, an artist, received a grant from PS1, the contemporary art museum in Queens, which merged with MoMA in 2000. “So, I thought, ‘Why not?’ After that I never wanted to leave again. I took to New York — to my great surprise.” She had been expecting an entirely modern city, but ended up falling in love with the cobblestone streets and older loft buildings of SoHo, where she first lived.

Eventually the relationship with her boyfriend ended, and Ms. Steinberg bounced around the city for several years — an old tenement building on the Lower East Side, a lesbian commune in Brooklyn, a dream co-op sublet on the Upper Westside — but in 1993 she was ready to find something that could last.

She was working as a journalist, and still does at 66, but in the early days she couldn’t yet write professionally in English so she became a frequent contributor to German-language publications. “The gigs never paid very well,” she said, and so her housing options were limited.

She started her search by walking the downtown streets of Manhattan that she admired, mostly around University Place, and asked around to find out which brokers represented the buildings. It turned out that one of the prominent brokers in the area was someone she knew from a party. Social fabric never hurts and, in this case, it landed her a rent-stabilized apartment off Gramercy Park for $800. It was a small studio but it was all the space she needed, particularly with two walk-in closets.

She settled into the freelance life. “Very free,” she said, laughing. She embraces the good with the bad, the autonomy with the modest pay rates. Ms. Steinberg describes herself as a hard worker but also a bad capitalist, uninterested in wearing herself down to chase every last dollar. “How about some play in life? Some charm?”

Carving out a niche writing about art and architecture, she became a regular contributor at the German-language edition of Vogue. She was trying to teach herself to write in English, too, but it was slow going. “I didn’t have the fantastic editor, Barbara Epler, in my life,” she said.

That changed in 1994 when Ms. Steinberg was introduced to Ms. Epler, a book editor, at a reception. “I just thought, ‘She’s the bee’s knees,’” Ms. Steinberg said.

Home Furnishings: Ms. Steinberg built much of her furniture: a bookshelf, her bed, her table, cabinetry for her archives. “Because the space is so small and I know exactly what I need, I built it to my specifications,” she said. “I’m not even sure if I can get some of the pieces out. It’s sort of like the ship in the bottle, something like that.”

Newspaper Clippings: In the digital age, Ms. Steinberg still favors clipping stories out of printed newspapers and magazines. “If I just have it on my computer,” she said, “I don’t see it anymore. I have to encounter them physically to remember them. I could be called a paper hoarder. Maybe I am one, to be honest.”

Ms. Steinberg invited Ms. Epler to her 40th birthday party; she showed up but left early. “I was very disappointed,” Ms. Steinberg said. But a few days later, Ms. Epler arrived at her apartment with a bottle of Veuve Clicquot. “She decided she wanted to approach me about being my girlfriend, but she didn’t dare do so at the party. I didn’t expect it. It was very sweet. I was very interested in her, but I’m shy too.”

That was 27 years ago. They’ve been together ever since and, in that time, neither has given up her studio.

“We both had rent-stabilized apartments,” Ms. Steinberg said, “and staying in either of our neighborhoods otherwise was beyond our means. Even if we put together what both of us paid for rent, we wouldn’t be able to get the kind of place we would want together. This is what I’m talking about when I say real estate determines your life.”

There are also considerations beyond money. Ms. Steinberg is attached to her neighborhood; she enjoys having a key to Gramercy Park and proximity to Union Square. “And my place is very important to me,” she said, “especially since I work at home. I need to have the space intact. And I did not want an apartment situation to have a negative effect on our relationship.”

She also has a sense of community within her building, though she does lament just how many rent-stabilized apartments like hers have been converted to market-rate units over the years. She was once approached by the landlord with a buyout offer — a one-time payment to permanently vacate the unit — but she turned it down before he had even given her a dollar amount. “I’m not good with money,” she said. “I knew it’d be gone too quickly.”

She feels a closeness with her neighbors who have managed to hang on to their rent-stabilized apartments, they say hello in the halls and chat in the laundry room. It’s harder for her to make those connections with the newer tenants. “We fold our clothes in painful silence,” she said. “When I smile at them out of habit they look down.”

She spoke to the building’s super about it, after she noticed early in the pandemic that many of the newer tenants left it to him to sort their garbage. “He very kindly, forgivingly said, ‘they are all just so worried.’ He has a bigger heart than me.”

She wonders if the divide she feels in the building might be generational, or rooted in resentment about the rent-stabilized rates she and others pay, or some other factor. Most of the studios in the building now lease for more than $3,200, or more than double Ms. Steinberg’s rent. “We seem to live in different worlds,” she said.

The one constant remains Ms. Epler, and she doesn’t have to be in the same room for Ms. Steinberg to feel that constancy. “The idea of a white picket fence makes my skin crawl,” Ms. Steinberg said. “It was never anything that attracted me. It was always something I found so stifling, so predictable — you live together, you have a child. We wanted something different.”

Instead, they opted for an affectionate black cat named Max and for late-night dinner parties. They chose to prioritize purpose over pay when it comes to a career, and to find a different way to share the important places in their lives. “One thing I did, which makes me a good human being, is I gave Barbara one of my walk-in closets,” she said.

She smiled before she added, “I think we’ve proven our independence very well.”

Sun Apr 10 , 2022
Image source: Getty Images Get ready to start racking those rewards up. Key points Credit cards commonly reward you for the purchases you’re already making. A few strategic moves could have you earning more rewards this year. One of the best aspects of using credit cards is getting to rack […] 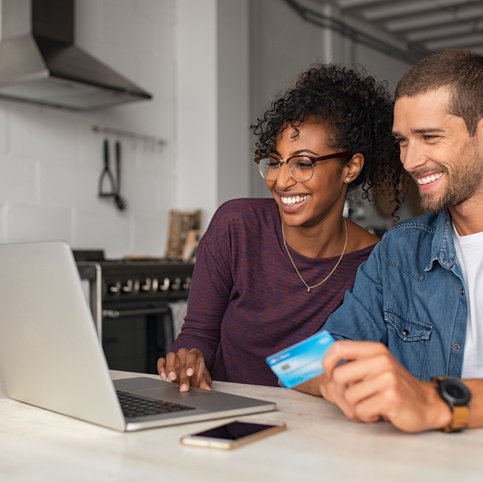