Private drive leading to the main residence at 1420 Davies Dr in Beverly Hills.

“For a person who likes this style there’s nothing like it, that’s why we feel bullish on the price,” listing agent Aaron Kirman of the Aaron Kirman Group told CNBC.

The palatial main residence reigns over 90210 from an impressive hilltop that delivers 360-degree views.

According to the listing, the eight-bedroom, 14-bath residence unfolds over three floors and 21,800 square feet. The home’s hefty asking price comes to about $3,990 per square foot which is more than double the $1,801 average price per square foot achieved in the neighborhood in the fourth quarter of 2021, according to The Elliman Report. But it’s a relative bargain compared with a record-breaking sale from October, when venture capitalist Marc Andreessen reportedly paid $177 million for an 11,810-square-foot Malibu home, bringing the price per square foot to a staggering $14,987.

Another one of those mega-deals was the distressed sale of 944 Airole Way, a 105,000-square-foot mega-mansion, which was offered at $295 million before selling at auction last month for $141 million. Kirman was a co-listing agent on the transaction that required bankruptcy court approval.

Los Angeles has seen 10 single-family home deals close for more than $50 million in the last six months including three homes that sold for over $100 million, according to multiple listing service and deed transfer records.

“There’s no other market that has those numbers,” Kirman said. “New York doesn’t, Miami doesn’t.”

He said he hasn’t yet seen an impact from rising mortgage rates, inflation or the war in Ukraine: “Any one of these could have spooked buyers, but they haven’t.”

He also pointed to low inventory to suggest right now it’s still a seller’s market on the ultra-high end. According to Kirman, the Los Angeles MLS currently shows 27 single-family homes priced over $50 million “That’s tight inventory,” he said. “We usually see 50 or more.”

This is supported by analysis from Miller Samuel Real Estate Appraisers and Consultants in the fourth-quarter Elliman Report. “Listing inventory fell to the lowest level on record at the largest rate on record,” for all single-family homes and condos in Los Angeles, it said.

You might recognize the mansion, which is located on Davies Drive and has been featured in music videos, commercials and by GQ in 2016 when the magazine threw a Grammys after-party at the residence celebrating musician The Weeknd’s birthday and published photos from the home showing Taylor Swift, DJ Khaled, Post Malone, Justin Bieber, and an entourage of A-list celebs partying inside and out.

Here’s a closer look at what $87 million could buy in Beverly Hills.

The home’s library unfolds over two levels connected by a spiral staircase. Overhead is a massive stained-glass light fixture framed by an ornately carved-wood ceiling.

Double pocket doors made with antique Venetian stained-glass windows disappear into the walls to reveal a dining hall that seats twelve. Under a gold leaf-painted domed ceiling and chandelier, the room is dripping in gold accents and vibrant walls upholstered in a deep red silk.

The billiards room is also covered in silk, this time the scarlet fabric is framed by dark-stained wood and accented by hand-painted scenes just above the floor.

The giant owner’s suite includes a seating area, king-sized bed and dumbwaiter that can whisk breakfast up from the kitchen.

Off the kitchen is a breakfast room with floor-to-ceiling hand-painted murals depicting colorful birds and foliage on every wall.

On the home’s lowest level is a red-velvet-clad cinema room.

According to Kirman, the facade of an 18th-century saloon was shipped from England and reimagined as the entrance to the home’s wine cellar.

The massive ballroom also has a stained-glass light fixture built into the ceiling and French doors that lead to the pool.

In the estate’s luxurious backyard is a two-story pool house.

The ornate in-ground pool is surrounded by manicured shrubs and dolphin-shaped fountains.

Steps away from the swimming area is a koi pond that features two red-painted bridges leading to a small rock island at its center.

Sat Apr 9 , 2022
A modern waterfront home outside Seattle that goes against conventional architecture hit the market Friday for $20 million, Mansion Global has learned.  Located in the tech hot spot of Medina, Washington, the four-bedroom, seven-bathroom home sits on 125-foot of frontage on Lake Washington, according to the listing with Michele Schuler […] 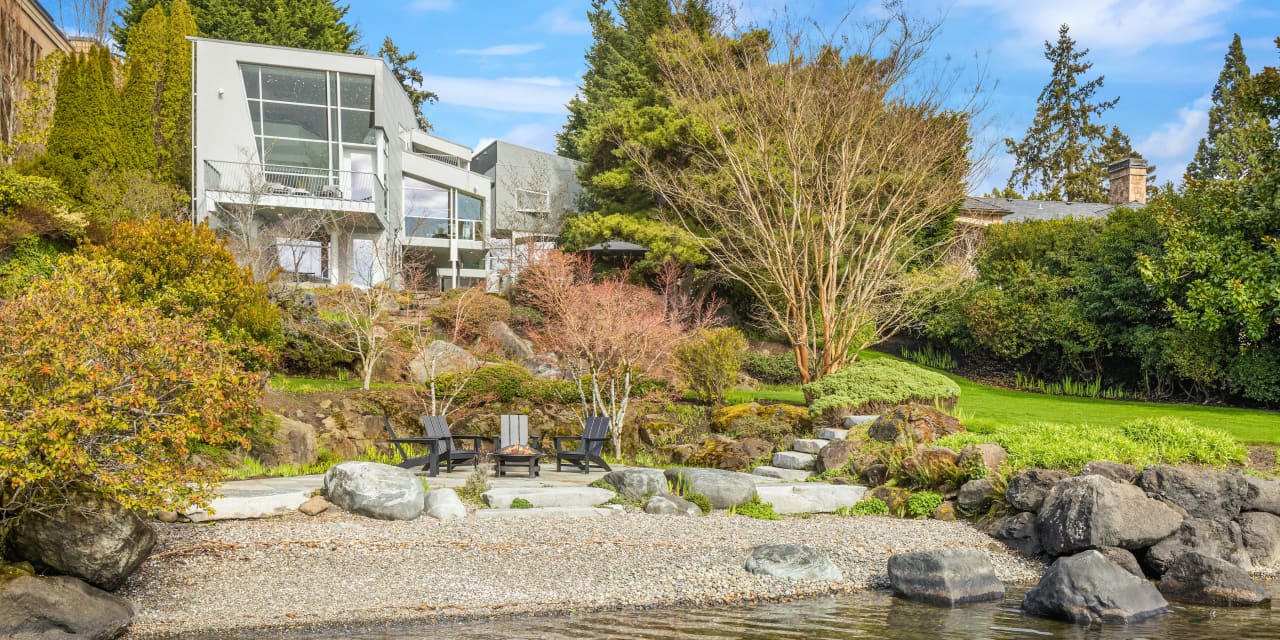