In the summer of 2018, while on holiday in Cornwall, in the southwest of England, Frieda Gormley and Javvy M. Royle, the married founders of the British interiors brand House of Hackney, happened upon Trematon Castle, whose gardens were open to the public for the season. Stepping onto the nine-acre estate of the Norman motte and bailey structure, which was built by Robert, Count of Mortain, in 1068 following the Battle of Hastings, they were instantly charmed. The palm- and acanthus flower-accented formal grounds that encase the home on three sides give way to apple orchards and untamed woodlands that slope down toward a creek, and from the lawn at the top of the hill the pair could see the River Lynher and, beyond it, the port city of Plymouth.

To the west of the castle mound stands a nine-bedroom Georgian manor house, its stucco facade crowned with the same tooth-shaped crenelations as the medieval curtain wall from which it was partially assembled, after sections of the fortification were dismantled to improve the view. Known as Higher Lodge, the house was constructed on the site of the original property’s castle hall and chapel in the early 19th century. There’s also a swimming pool whose Mogul pavilion was salvaged from Rajasthan and, within the circular shell keep, a rather grand chicken coop. “It was wildly romantic, like an otherworldly English fairy tale,” says Gormley.

Three days later, coincidentally, once the couple were back home in East London, a friend called to gauge their interest in taking over the very same estate, which has belonged to the Duchy of Cornwall since 1337 (the estate was established by Edward III to give independence to his heir, Prince Edward, and later the eldest son of the monarch, and is currently managed by the Prince of Wales), as the latest occupants — the English landscape designers Isabel and Julian Bannerman — were looking to end their tenure as custodians. Without ever having set foot inside, Gormley, 41, and Royle, 45, agreed. “We just thought, ‘How bad can it be?’” she says. Since moving in with their two children, Javi, 13, and Lila, 10, three years ago, the pair have made it their mission to revive the home’s neo-Classical interior, restoring the floor-to-ceiling sash windows and stripping back the layers of history held on the walls before covering them anew with their own wallpaper designs, which are modern takes on the flocked patterns synonymous with the English Arts and Crafts movement.

In fact, the house doubles as a sort of unofficial showroom and office (the official one is, as of March this year, housed at St. Michael’s, a Victorian gothic church and clergy house in East London) for House of Hackney, which they started in 2011, after Gormley, a former fashion buyer, couldn’t find the sort of richly decorative and playfully naturalistic prints she wanted for their Victorian home in London Fields. It’s since expanded into paint, furniture, carpets and clothing. “Our houses have always been our muses,” she says. Their time at Trematon has given rise to the Trematonia print, which mimics an age-old tapestry decorated with Celtic foliage and mythical beasts and Phantasia, a pattern awash with dragons and toadstools — and given them the idea to run a bed-and-breakfast out of the house during the month of August (they’re taking a year off to spend the summer with their children, but plan to reopen it next year; the entire house can still be rented through Unique Homestays).

But their interest in ecology is more than aesthetic. “Being in this corner of the world, seeing the seasons change and really tracking the cycle of nature, builds your connection with the environment and the desire to protect it,” says Gormley. Thus, Royle has begun tending the home’s now-organic vegetable plot, planted with purple sprouting broccoli, kale, peas and zucchini, and is in the throes of transforming the old walled garden with heritage fruit trees and a small solar plant. What’s more, ever since the pair has stopped the use of chemicals and applied the no-dig method of growing, they’ve observed new levels of vitality in the plants, as well as the slow worms, butterflies and even the swifts that nest along the remaining castle walls.

On a recent spring day, Gormley and Royle hosted a small gathering at the house, drawing together some of the friends they’ve made since moving to Cornwall in celebration of Beltane, an ancient Celtic festival of fire that falls about halfway between spring and summer. Among the guests were the chef and regenerative farmer Dan Cox; Daze Aghaji, a climate justice activist and the creative director of the online platform Earthrise; the medical herbalist Harriet Coleman; Dom Bridges, the founder of the natural skin-care and fragrance line Haeckels; Catherine Chong, a climate economist and the co-founder of Farms to Feed Us, which connects British consumers with sustainable, small-scale food producers; Tim Williams, a New Zealand-born soil expert; and his wife, Claire Williams, a gardener, a cook and, along with her husband, a promoter of regenerative farming practices throughout the region. “We didn’t expect to meet such kindred spirits,” Gormley says of the group, which has developed its own cyclical economy, and shares everything from food to furniture to Old Spot pigs.

By midday, everyone had gathered in the kitchen to chat and drink coffee while Claire and Cox, a former executive chef at Fera at Claridge’s in London and L’Enclume in Grange-Over-Sands, put the finishing touches on a vegetarian feast they prepared using ingredients from nearby Crocadon Farm, a 120-acre regenerative site in St. Mellion that the two friends run together with Tim. The dishes were then presented buffet-style on the large marble-topped prep table and, after filling their plates, the diners took their places at the room’s long oak table, which was decorated with jugs filled with Poet’s Narcissus flowers that Gormley had cut just that morning.

The spread included a Garden of Eden torta, or a baked vegetable omelet, filled, in this case, with kale, wild garlic, fennel, chervil and Comté cheese; roasted Sombra squash served with sautéed chard, capers, fermented cucumber and sorrel leaves; and a Carolus potato and red Russian kale salad with miso mayonnaise and sautéed three-cornered leeks. Much of the fare was so fresh it had barely left the ground. “We dug these up just yesterday,” said Cox, gesturing to the Jerusalem artichokes, some roasted, some puréed, which were paired with lovage, ribwort plantain leaves and broad bean tops. To drink, there was Ripe, an organic cider made with otherwise unwanted organic apples foraged from Cornish orchards.

In part, the meal was a way to test potential dishes for the Granary, a cafe and events space that Cox will open with the Williamses at Crocadon Farm this summer. (Later, they plan to add a farm shop and a full-fledged restaurant.) Not that the guests offered up many critiques. As they ate, they talked about questions surrounding greenwashing, whether it would be possible to make charcoal from the property’s towering Holm oaks and the progress of the portable “chicken hotel” that Tim is currently building on the back of an unused trailer. Eventually, a sweet clover, Bloody Butcher corn and black bee honey cake dressed with calendulas appeared, along with steaming cups of Spring Equinox tea, a custom blend of nettle, cleavers, dandelion leaf and Plantago that Coleman conceived. Dessert was followed by a walk around the gatehouse ruin and out into the meadow, which allowed the group to enjoy the splendors of the natural environment that continues to draw them together. Below, Gormley and guests share tips on how to host your own seasonal festivity.

Bring Some Sunshine to the Table

No guest arrived empty-handed. Coleman, who grew up in a Somerset household that adhered to certain pagan practices, baked sunshine bread, an age-old recipe passed down from her mother. “Paganism is a seasonal way of life, and certain foods mark certain seasons,” says Coleman. “This bread is all about the return of the sun in the Celtic calendar.” The sun, in turn, is associated with the harvest, and one of the bread’s main ingredients — honey — represents the richness of nature.

Gormley dressed the table with a crisp white tablecloth made by House of Hackney in collaboration with the heritage Lancashire linen producer Peter Reed, matching napkins embroidered with the brand’s H.O.H. monogram and a vintage set of Burleigh’s Blue Asiatic Pheasant ceramics. “We wanted it to be fresh and harmonious, just as we tried to do with the kitchen as a whole, so that you can feel the serenity of the garden coming through,” says Gormley. Indeed, the room’s restrained palette of greens and whites complements the garden, rather than distracting with lots of colors or clashing patterns. “Simplicity is important,” says Gormley. “The table should be a place where you can think.”

Despite inclement weather, Gormley still managed to pay tribute to Beltane by cleverly playing with the natural light. It danced off the fresh white table linens, and she laid and lit a wood fire, using fallen logs gathered after winter storms, at the kitchen’s open hearth. For added radiance, she drew from the collection of antique candelabra she’s acquired over the years, placing a grand silver specimen set with verdant forest green candles at the end of the table.

Get Creative With Your Ingredients

“We wanted to be resourceful,” says Cox. When the broad beans he and Claire had hoped to pair with the roasted Jerusalem artichokes weren’t yet ripe, they used the plant’s flowers and tops instead. “The tops look beautiful and taste amazing — they have this sweet, almost fragrant flavor,” says Cox. Being open-minded in your approach, he believes, frees you to use whatever is truly in season. The lunch was also filled with foraged fare, from the nettles to the garlic to the ribgrass plantain leaves. Normally fodder for the cows, this herb, which grows in the pasture at Crocadon, adds a hint of mushroom. “You might have an idea about what you want to cook, but until you go outside and see what’s ready to harvest, nothing is set in stone,” Cox says. “The land is full of surprises.”

Waste Not, Want Not

Not only did Cox and Williams incorporate the seasonal ingredients they had on hand, they tried to use as much of them as possible. Rather than discard the skins of the artichokes, for example, they created so-called choke crisps: After scrubbing the whole artichokes thoroughly, Cox roasted them in a deep tin with a thin layer of water at the bottom that he covered with foil, until they were softened but still al dente. Once they’d cooled, he cut them in half and carefully peeled the skins from the cores, laying them out onto a baking tray that he placed back in a low oven for a few hours. After that, he lightly fried them in hot oil and dressed them with sea salt. As Cox says, “It takes extra effort, but it’s so worthwhile.”

Thu May 12 , 2022
Housing secretary Michael Gove has said the government is not bound by its 300,000-homes-a-year target alone, in the clearest indication yet the Conservative Party’s manifesto pledge has been dropped. Gove said: “It’s no kind of success simply to hit a target if the homes that are built are shoddy, in […] 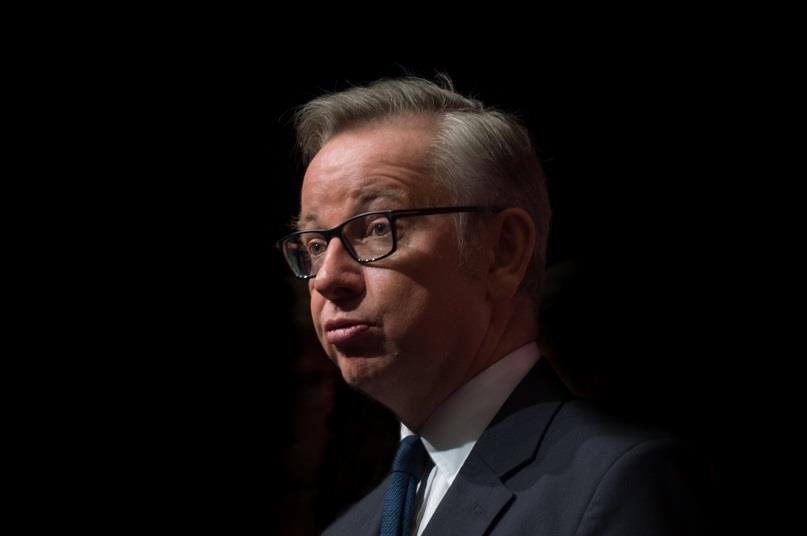