Rice University architecture students design and draw dozens of buildings during their college career, and sometimes, one of their ideas becomes a structure for Houstonians to use.

Madeleine Pelzel, Kati Gullick and Alex Oetzel — Rice graduates who returned for the unveiling of a 625-square-foot “accessory dwelling unit,” or ADU, they designed or worked on — were happy to share the peach-colored building that sits among Avenue CDC rentals on Summer Street in First Ward.

Pelzel and Gullick designed the structure in one of their Studio classes, then it was chosen from other projects generated in the same class to be built by others who followed in the curriculum’s Construct classes. In all, 63 students worked on the project at one time or another.

Avenue CDC, the nonprofit that works to provide affordable housing, collaborated with Rice on the project, lending staff time and donating some money.

“We have a particular responsibility to demonstrate how architecture can work to confront climate change, how we adapt our behavior and make use of more sustainable technologies … and, importantly, improve the lived experience of all of us in the process,” Colopy said.

Their task for students was aimed at housing that was buildable, sustainable and helped address the affordable-housing crisis being experienced in Houston’s inner Loop.

To illustrate the need, the 2020-2021 Harris County Housing Survey conducted by Rice University shows that almost 500,000 households spend more than 30 percent of their incomes on housing.

In a housing crunch, small ADUs — they could be stand-alone structures such as a guesthouse or mother-in-law house or an apartment above a garage — can provide income for the owner and an affordable place for individuals or small families. In Houston, city code allows for ADUs up to 900 square feet.

Pelzel and Gullick designed an ADU, meant for a single person or a couple, in two parts, one side for living and the other for sleeping. Solar panels generate more power than it needs, so its leftover energy goes back into the grid.

“We had to think about how you would want something situated in a backyard — not only from the perspective of the owner of the primary house, but also of the person living in the ADU,” Pelzel said. “We thought about that relationship.”

The dog trot itself — really a covered, 140-square-foot porch between two parts of a house — is part of Texas architectural history from before the days of air conditioning, when homes were designed to stay naturally cooler by taking advantage of shade and prevailing winds.

It allows for a natural breeze to blow through and exposes the biggest windows to the center, which is shaded.

Another energy saver would be the two parts themselves. You don’t have to air-condition or heat the whole unit at once. Instead, tenants can heat or air-condition the bedroom only when they’re sleeping and do the same for the living-kitchen side during the day when they’re home and active, the women said.

A corrugated metal roof runs across the whole thing and down the ends, allowing for a curve at each end corner.

“The curves on each end are important to hold it together visually. We didn’t just want two boxes sitting across from each other,” said Pelzel, who graduated from Rice in May 2020 and now works as an urban planner at Huitt-Zollars.

“And we want it to look interesting from the street — not like a shed,” added Gullick, who graduated in January and works at Cobalt, the architecture firm of which Colopy is a partner and creative director.

Much of the construction work was done during the coronavirus pandemic, so the students dealt with real-world issues that others faced. They had to change the type of insulation because the type they initially wanted suddenly had a nine-month lead time, and when the price of cedar skyrocketed, they shifted to pine.

Thu May 5 , 2022
A co-living startup offers a new sleeping-pod design to allow up to 14 residents to share a home. The first two sites are in Palo Alto and Bakersfield, California, where rents are on the rise. Homes are fully furnished, with common workspaces, shared kitchens, and two bathrooms. Loading Something is […] 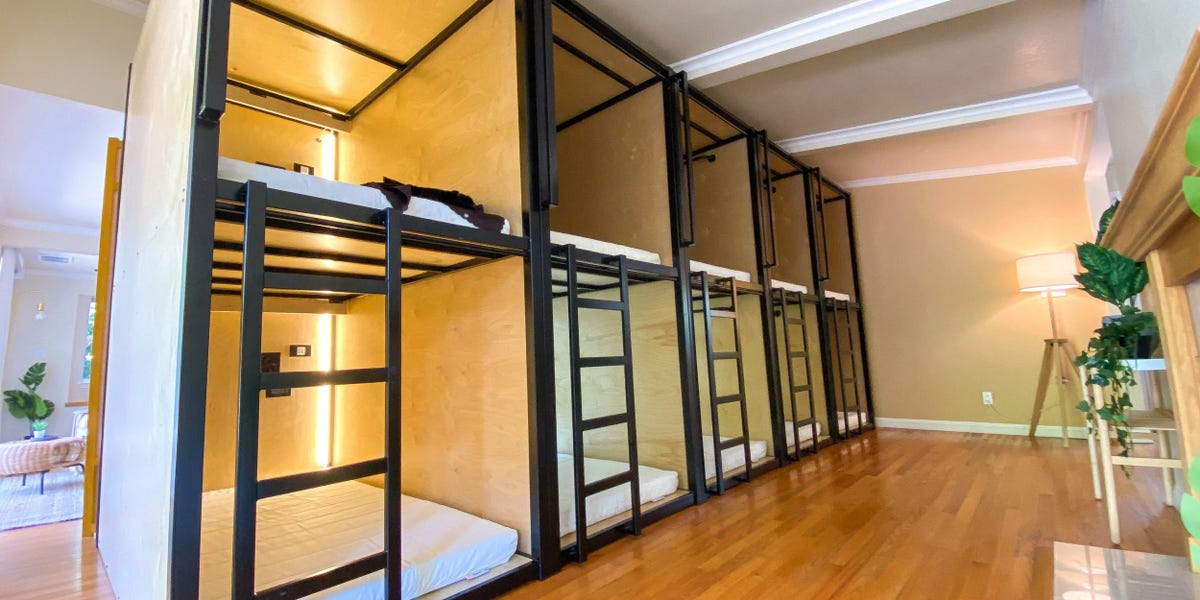