Residents will be able to have a say on drawing up local design codes for housing developments under legislation to be announced tomorrow in the Queen’s Speech.

Housing secretary Michael Gove confirmed the new levelling up bill will include a proposal for ”street votes” aimed at ensuring local support for ”gentle densification” of housing.

Gove said: “We will make sure that through local democratic ballots, sometimes street by street, we can have the enhancement that we need to see the additional homes being built.

“In a way that leads to what the experts call ‘gentle densification’, but what you or I would just recognise as simply building in tune with what’s already there.”

Gove said in a Sunday Telegraph interview that the move would help ensure there is less resistance to new development, citing the example of the Poundbury settlment in Dorset.

He said: “You don’t get that resistance if you’ve got a community like Poundbury. You get a resistance to it from a few modernist architects who sneer at what the rest of us actually like.”

Gove has previously said the government would look to legislate for so called ”street votes” in a bid to ensure developments have local support. Think tank Policy Exchange has said the policy would result in the creation of more than 100,000 extra homes a year for the next 15 years through suburban densification, generating £34bn of construction activity annually.

Gove said: “My view is resistance comes down to the quality of what is built, the business model of the house builders and the fact that they can make significant profits and those profits are not shared equally with the community; the fact that the planning system means that developers can override the clearly expressed view of local people, if they have deep enough pockets and if they game the system; the fact that there is insufficient and ineffective protection for the environment.”

Gove also appeared to shift away from the government’s 300,000-home annual target for development. He said the target “should not be used as a sole measure of success” saying it is problematic that in the past “people have been driven just to create units of accommodation, rather than homes and communities”.

The proposals for street votes and local design codes form part of the government’s re-think on planning reform following controversy over Robert Jenrick’s plans to tear up the planning system.

The previous housing secretary had proposed setting legally binding housing targets for councils and telling them to zone areas which would then grant automatic planning permission to developers. The reforms, criticised as removing local communities’ control over development, were widely seen as a key factor in the Conservatives’ surprise defeat in the Chesham and Amersham by-election last June.

See also>> You have no authority here: Should planning decisions be left to local councillors?

The government however signalled in March it is still intending to push ahead with plans to scrap section 106 affordable housing requirements and the community infrastructure levy and replace it with a new nationally-set infrastructure levy with proceeds collected and spent locally.

It is not clear whether the reforms will be included in the levelling up bill this week.

The plan to scrap section 106 – under which developers agree to provide a percentage of affordable homes in a development – is controversial as the mechanism is a major source of affordable housing supply. A total of 24,487 homes were completed via section 106 in 2020-21.

Under previously announced plans, the government’s new Infrastructure levy would be set as a proportion of the sale value of a development, above a minimum threshold. Currently CIL is set locally, and section 106 contributions are subject to detailed negotiation, while both CIL and section 106 levies are more often levied prior to commencement of construction onsite, impacting upon developer cashflow.

A proposed apartment building perfect for Minneapolis’ 2040 plan. So why did the Planning Commission deny the project? 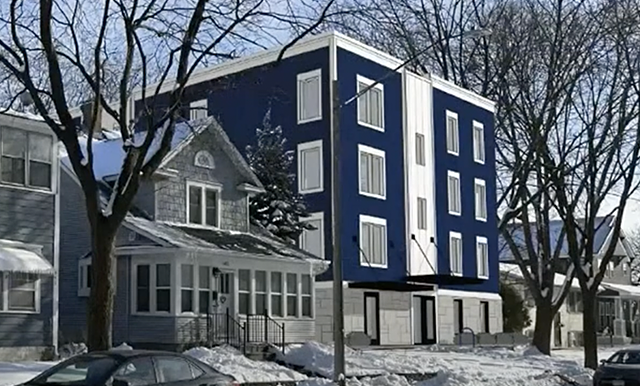