Standing behind the counter of Yuko Curry in downtown Los Angeles, Yuko Watanabe encouraged a hesitant customer to take a walk through her “secret plant tunnel” — an enchanting, moss- and plants-covered stairway shaft that connects the ground floor of her restaurant to the second-story loft.

“Go ahead and take a look,” Watanabe said as she gestured at the installation, unbothered that the visitor gravitated toward the plants and not the menu.

It’s nothing new. For nearly 14 years, Watanabe has brought her unique approach to Japanese comfort food and biophilic design to her three restaurants: Yuko Kitchen in the Mid-Wilshire neighborhood of Los Angeles, Yuko Curry in downtown L.A. and, a few doors down on 5th Street, Yuko Kitchen: DTLA.

Overflowing with plants of every shape and size — pothos, ferns, rubber plants, Dracaena fragrans ‘Lemon Lime,’ you name it — and decorated with colorful hand-painted murals and chandeliers dripping with ferns (her favorite) and succulents, Watanabe’s restaurants have become popular on Instagram and TikTok, thanks to her ability to create magic with everyday items like trash cans, moss, paper and paint.

You never know what will happen when you plant a seed, but Watanabe’s uncanny ability to fuse food with flora has secured Yuko Kitchen’s reputation as a must-see Los Angeles destination, much like the plants that have overtaken her dining rooms and outdoor patios.

Many people recognize Watanabe, even when she’s wearing a mask: Downtown dog walkers greet her on the sidewalk. Customers ask about her beloved 16-year-old German shepherd, Genki. Recently, she was even spotted while shopping at Whole Foods. “A girl came up to me and asked me if I’m Yuko from Yuko Kitchen.” she said. “She told me she follows me on Instagram and is a big fan of my restaurants.” Watanabe, who was touched to hear that people love what she is doing, can’t resist a touch of humility. “I was just glad it happened at Whole Foods and not at a fast-food joint while I am pigging out on greasy food,” she added with a laugh.

The past two years have been tough for restaurants and Watanabe in particular. When Los Angeles restaurants were forced to close indoor dining during the stay-at-home order, she struggled to keep her three restaurants afloat. Depressed by the sight of her empty tables, she decided to fill them with a profusion of plants.

“Nobody could come inside,” she said of the restaurant closures. “All the tables were empty with the chairs upside-down on them. So I started adding tons of plants. Eventually, people asked me if I wanted to sell them. I started adding more and more plants, and before I knew it, it was like a humongous jungle indoors. Now people want to see more jungle!”

Encouraged by the interest, she decided to give it a try. She added plants to the menu and began selling greenery alongside her staples: Senecio with sushi, prayer plants with pumpkin mochi cookies, calathea with her famous mint lemonade. And it worked. “People bought plants like crazy during the pandemic,” she said.

Then, just days before Los Angeles restaurants were cleared to resume indoor dining in 2020, rioters targeted Yuko Kitchen in downtown Los Angeles as part of the nationwide protests that erupted following the murder of George Floyd.

After her building manager alerted her to the rioters outside Yuko Kitchen, she drove downtown at 1 a.m. and defended her restaurants armed with a broom.

“I yelled at them, ‘Why are you attacking me?’” she recalled. “I told them, ‘I’m a minority. I’ve built this small business from scratch.’” Looking back, she doesn’t believe she was targeted because of her race. “It was a party,” she said, before adding with a grin: “A friend told me that I should get a sponsorship from the broom company.”

Asked if she was afraid, she recalls feeling fearless. “It was like in Japanese anime where you get a superpower when you are in danger,” she said.

Watanabe, 44, is warm and open and has a wonderful sense of humor. She can also be firm and outspoken, like the time she told the drug dealers who congregated outside her restaurant to find another corner. On Instagram, she tends to share her struggles honestly, whether it’s dealing with depression during the pandemic or confronting businessmen who mock her Japanese accent and presume she is unintelligent.

It is this kind of humanity that has inspired not just her loyal customers but her employees as well. Kathleen Deloso, who worked at Yuko Kitchen during 2019 and 2020, describes Watanabe as an “incredible powerhouse” who managed to thrive during the pandemic. “Things were so confusing, and there were a lot of quick changes that were necessary to make the business run,” she said. “But Yuko owned it. She kept going. As a fellow Asian American, it was so inspiring for me to work with such a strong Asian American woman.”

Watanabe was born and raised in Japan, where she grew up in the countryside and was surrounded by nature. “It was like Malibu — beach and mountains — but without the rich people,” she said.

Her parents loved to cook, and she grew up cooking and eating with them in her family’s kitchen. Her upbringing would ultimately influence the nostalgic passions that make her three restaurants so special: nature and cooking.

“Anything that I felt or touched or saw when I was growing up has inspired my work,” she said. “My installations and paintings represent how I feel. I think the beauty of what I do comes from my childhood.”

In 2008, she opened Yuko Kitchen in a tiny cafe located just off of Wilshire Boulevard, not far from the El Rey Theatre. “I painted the walls and decorated the restaurant with stuff that I could afford,” she said. “I didn’t have much money, so I painted it by myself and bought plants to decorate. I worked Monday to Saturday all day, every day. Instead of visiting my friends, I stayed in the restaurant with Genki and painted the walls one by one. Before I knew it, all of the walls had some kind of a painting by me. I added color and flowers, and that is how I started. Then I started adding more plants, and it became a jungle.”

“The place has a lot of personality,” Deloso said. “Yuko is so creative, and it shows in everything she does. When you walk into her restaurants, it’s like a jungle oasis. Everything from the plants to the food has a Yuko touch. I am really excited and happy to see how much her restaurants have grown since the beginning of the pandemic.”

Today, most but not all of the plants are for sale, in addition to plant accessories including pebbles, planters and watering cans. Still, Watanabe can’t part with the ones that have been growing in her restaurants for years. “Everyone wants the big plants, but I don’t think I can sell them because they are so happy here,” she said. “I don’t think they will be comfortable in someone else’s house. Besides, what is the beauty of buying a huge plant? Buy a small one and watch it grow; that’s the beauty of nature.”

Although she values her community, Watanabe describes herself as an introvert and cherishes Sundays — her lone day off — when she can spend time at home, alone with Genki.

“When I’m painting and doing installations, it’s a big part of my therapy,” she said. “You can’t avoid people working in a restaurant, so I find my time alone to be precious. That’s when so many of my ideas take flight.”

During the height of the pandemic, when it felt as if her life was a series of endless pivots, she transformed her restaurants into plant shops. Now, people come from all over L.A. to dine in her greenery-filled restaurants, shop for plants and experience one of the most comforting dining experiences in Los Angeles. For many, her plant installations have become a joy-filled respite in a season filled with COVID fatigue.

“I want people to come in and see the plants and enjoy them,” Watanabe said of the living tunnel at Yuko Curry, one of several installations she has created throughout Los Angeles, including a stunning tunnel composed of 365 plants at Lost Books in Montrose. “It’s so great to be in the tunnel. I think people should experience it. You don’t often have a chance to be surrounded by that many plants.”

One day, she’d like to buy a farm and grow her own vegetables for the restaurant.

She could also see herself creating a movie set with a “massive dinner table filled with exotic food I create in my fantasy garden. It’s why we all live and chase dreams in Hollywood, right?”

In the short term, though, she recently completed a pair of life-size palm trees and a football field installation for the Super Bowl Experience at the Los Angeles Convention Center this month.

As we enter the third year of the pandemic, it’s hard to imagine what the future will bring. Will the seeds that she has planted take root? Watanabe is hopeful. “I feel like I have a lot more ideas following the pandemic and a lot more dreams about what I want to do,” she said.

“Whatever happens in my life, so far, I am very thankful.”

This is the latest in a series we call Plant PPL, where we interview people of color in the plant world. If you have any suggestions for PPL to include in our series, tag us on Instagram @latimesplants.

Fri Feb 11 , 2022
Ohio University has colloquially been referred to as the “Harvard on the Hocking,” both for its educational prominence and traditional university aesthetic. As the university continues to evolve architecturally to meet educational needs, it aims to maintain some of the quintessential components that have come to identify OU. Some of […] 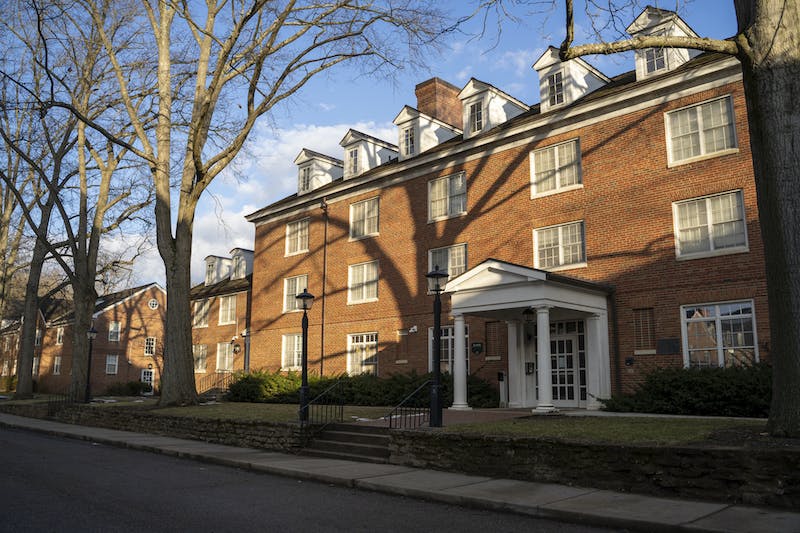