From the steel sculpture by Fabian von Spreckelsen in the garden to the curve of Kaspar Hamacher’s Lounger chair inside the house, there is a compelling assortment of pieces to admire at the Belgian home of French writer and designer Lise Coirier.

“For us, culture is not the cherry on the cake, it is at the core of everything,” explains Coirier. She and her Swedish-Italian husband, Gian Giuseppe Simeone, believe that being surrounded by art has a fundamental impact on quality of life.

It’s a thread that weaves through their work. Both have founded their own creative agencies and written several books on design. Coirier is also the publisher and editor of the acclaimed biannual True Living of Art and Design magazine, while Simeone, an art historian and archaeologist by training, consults for the European Union on its cultural support programmes.

This passion for art, design and photography is evident in their home on the outskirts of Brussels, in Tervuren, where the work of 30 artists they represent in Spazio Nobile, a gallery they own in the centre of Brussels, is very much on display.

“It’s a way of experiencing what we recommend to our collectors – it’s important to know what it’s like to live with art objects,” says Coirier.

Built in 1900, their home was originally conceived in the tradition of Flemish neo renaissance and neo baroque with a smattering of art nouveau, as was the rage at the turn of that century.

It is also the house Simeone’s parents bought when he was 18, and where the couple have now lived for the past 23 years with their daughters, Juliette and Eva.

When they moved here, after the death of Simeone’s father, the pair faced the dilemma of leaving their apartment in Ixelles, which now houses their art gallery, and the daunting prospect of doing up a large family home which was beyond their budget.

“I waited almost 15 years to figure out the spaces and have the means to invest in this immense house,” says Coirier, who was keen on a substantial update while preserving period details. The couple also wanted to mix vintage design pieces and contemporary work with more exotic objets and ethnographic art pieces.

The large living room with its high fireplace, towering ceilings and fluted columns with neoclassical details comes into its own when the couple host events – but it is in the kitchen, the dining room and small library on the first floor where everyday living happens.

A Carina Seth Andersson vase in frosted glass sits on an oval dining table by Hans Wegner in the dining room. On the sideboard is a walnut tray by Kaspar Hamacher that was made for the couple’s 20th wedding anniversary and on which sits a small vintage enamelled horse by ceramicist Lisa Larson.

Above the doorway is Piet Stockmans’s Wilde Strippen, which appears to dance on the walls and is a play on the decorative details typical of a 1900 house. On the mantelpiece, next to the Amy Hilton pastel and marble fragment, is a sandstone pendant used as a bookend.

The living room, with wild silk curtains, is furnished with a large Hay sofa and on the fireplace, a vintage Mezza Chimera lamp by Vico Magistretti sits alongside stoneware and pottery by Vincent Van Duysen. “We love the fragility of ceramics and glass or the strength of wood to the touch and the patina it acquires over time,” says Coirier.

The kitchen was renovated by Belgian architect Sebastien Caporusso, retaining the original cupboard fittings by Cubex, a striking example of the first American-style kitchens.

An oval marble table has been added. “We didn’t want a typical kitchen, we wanted to curate it in such a way that we could show some of the pieces,” explains Coirier. An “enfilade” of glass made at Atelier Mestdagh displays Bela Silva and prototypes from Sebastian Herkner for a “Glass is Tomorrow” exhibition.

The garden was landscaped by architect Aldrik Heirman, who has worked with Van Duysen and David Chipperfield. “We are on the edge of the forest of Soignes, so the garden really required the eye of an expert,” says Coirier. “It was important that it looked as natural as possible, and in keeping with the house – as if it had always been there.”

Back in the office? 5 ways to use your webcam other than Zoom meetings

Mon Feb 14 , 2022
In this photo illustration the American video Communications company Zoom  logo seen displayed on a smartphone with a computer model of the COVID-19 coronavirus on the background.  (Photo Illustration by Budrul Chukrut/SOPA Images/LightRocket via Getty Images) Remember in early 2020 when we were excited to join Zoom happy hours, and […] 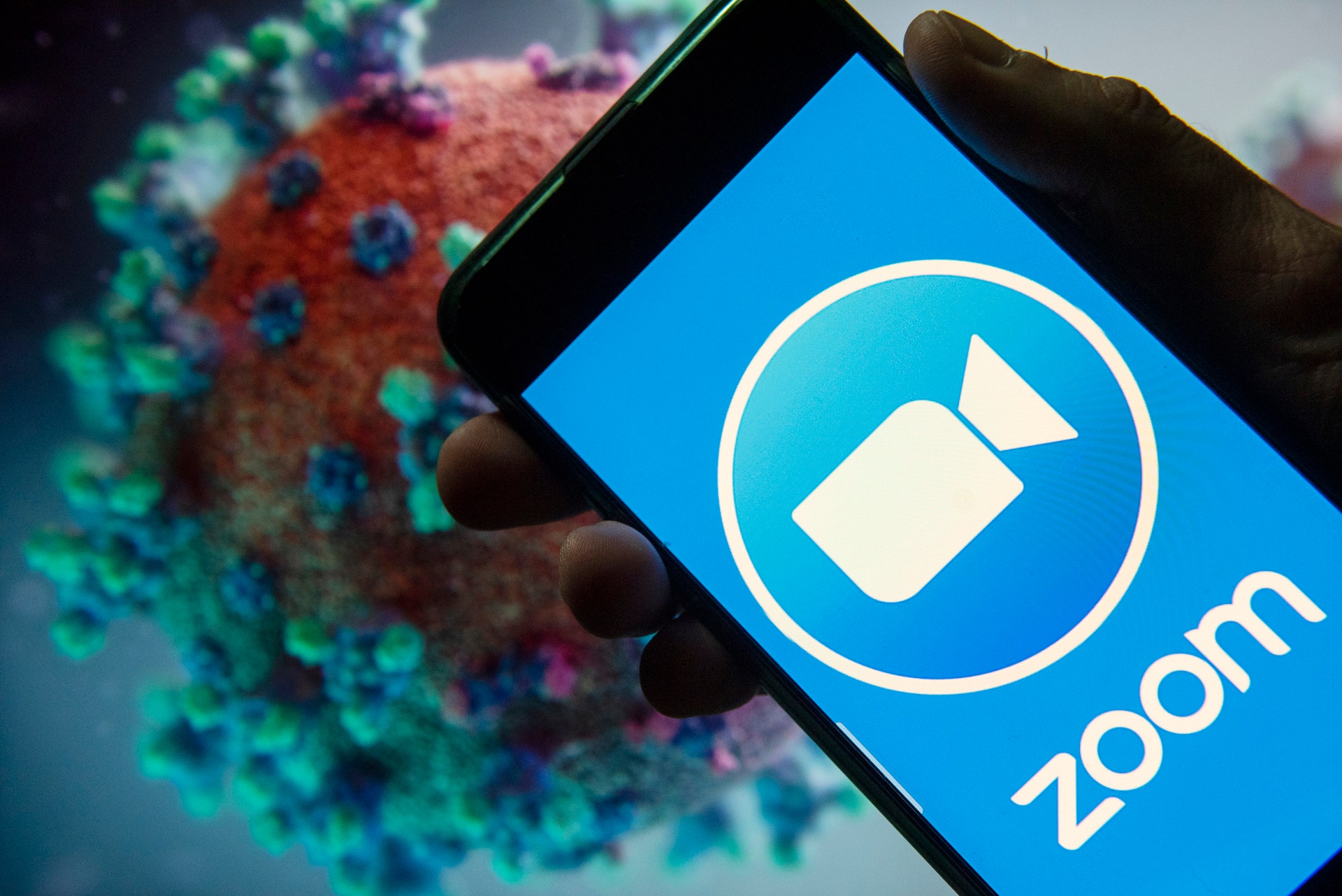