A proposed market-rate development on Sonoma Highway received raves from city officials last week, as the Sonoma Planning Commission took an initial look at a planned 7-unit modular apartment building at the corner of Highway 12 and Lyon Street.

“This is exactly what the city needs,” Planning Commissioner Larry Barnett said about the project, noting that the small-size of the units is not seen often in Sonoma.

“The idea is to provide some rental housing that gives people more available options in Sonoma,” said Schaefer on behalf of the project’s designer Honomobo, a Pinole-based company that builds prefab modular homes.

Multiple commissioners described the design of the 2-story apartment complex as “modern” or “contemporary.”

In an introductory letter about the proposal, project Managing Partner Alicia Hansel, of Kibby Road LLC, described the intent of the design as “fresh, innovative and sophisticated.”

“Bringing an industrial feel with a housing solution offers a design that is complimentary to the Sonoma Highway frontage and a use that is in harmony with the surrounding neighbors,” wrote Hansel. “With great care, the property owners have sought to build this residential project out with a forward crafted design in sustainable design, smart efficiency and durability.”

A mix of 1- and 2-bedroom units bring greater housing “choice and diversity” to Sonoma, project planners said in the staff report, adding that modular steel/container housing is in “greater demand” these days.

According to Associate Planning Director Kristina Tierney, since the units are below 800 square feet in floor area, the project is exempt from the city’s “inclusionary” requirement that 25% of units in new developments be at below-market rates.

Tierney described them as “affordable by design”; Schaefer as “market affordable housing.”

Project planners said they’d met with surrounding neighborhood homeowner associations and “it was determined there was support for this project” and areas of concern had been addressed, including opting for individual 35-gallon garbage and recycling bins instead of large communal dumpsters, adding colored panels to the rear-facing side of the building and expanding the landscaping to create a visual screen from neighboring townhouses to the project’s parking lot.

Diane Lumiere, a resident of the nearby Pueblo Serena Mobile Home Park, said the project “is exactly what we’d like more of in the city,” highlighting the proposal’s “contemporary” look and the small size of the units.

“I wish DeNova had introduced their project to the neighbors like this,” said Lumiere, about a recently proposed 15-unit project on Fifth Street West, which received pushback from neighbors when it was presented March 1 before the Design Review & Historic Preservation Commission. “We would have embraced a project like this rather than an incongruent group of homes.”

Other planning commissioners joined Barnett in their enthusiasm for the project.

“I like the size, that they’re steel containers that can be brought in and build fairly quickly,” said Commissioner Sheila O’Neill. And I like the modern design.”

Commissioner Bill Willers said he liked the project from a “design standpoint.”

“I think they’ve addressed the scale of multi-family dwellings in our community appropriately,” Willers said. “I would love this project to be super successful in the eyes of the community – it is the type of project we should be encouraging.”

Commissioner Ron Wellender predicted Sonoma residents will be receptive to the project, given that the property has sat vacant “too long.”

“I’m extremely pleased an empty lot that has been empty for too long is being considered to be filled,” Wellender said. “Given that Sonoma has a more eclectic architectural mix, I think this will be welcomed.”

Following the presentation, Schaefer said the project designers will next be further refining such details as the expanded landscaping, as suggested by planning commissioners, and will return with a more complete project proposal at a later date.

Sat Mar 19 , 2022
A woman has revealed how her property manager wanted to use her apartment for “staged photos” and offered her an Amazon gift card to thank her for it. In a recent video posted to TikTok, Alexis, @alexisposerio, shared a screenshot of an email she received from her property manager named […] 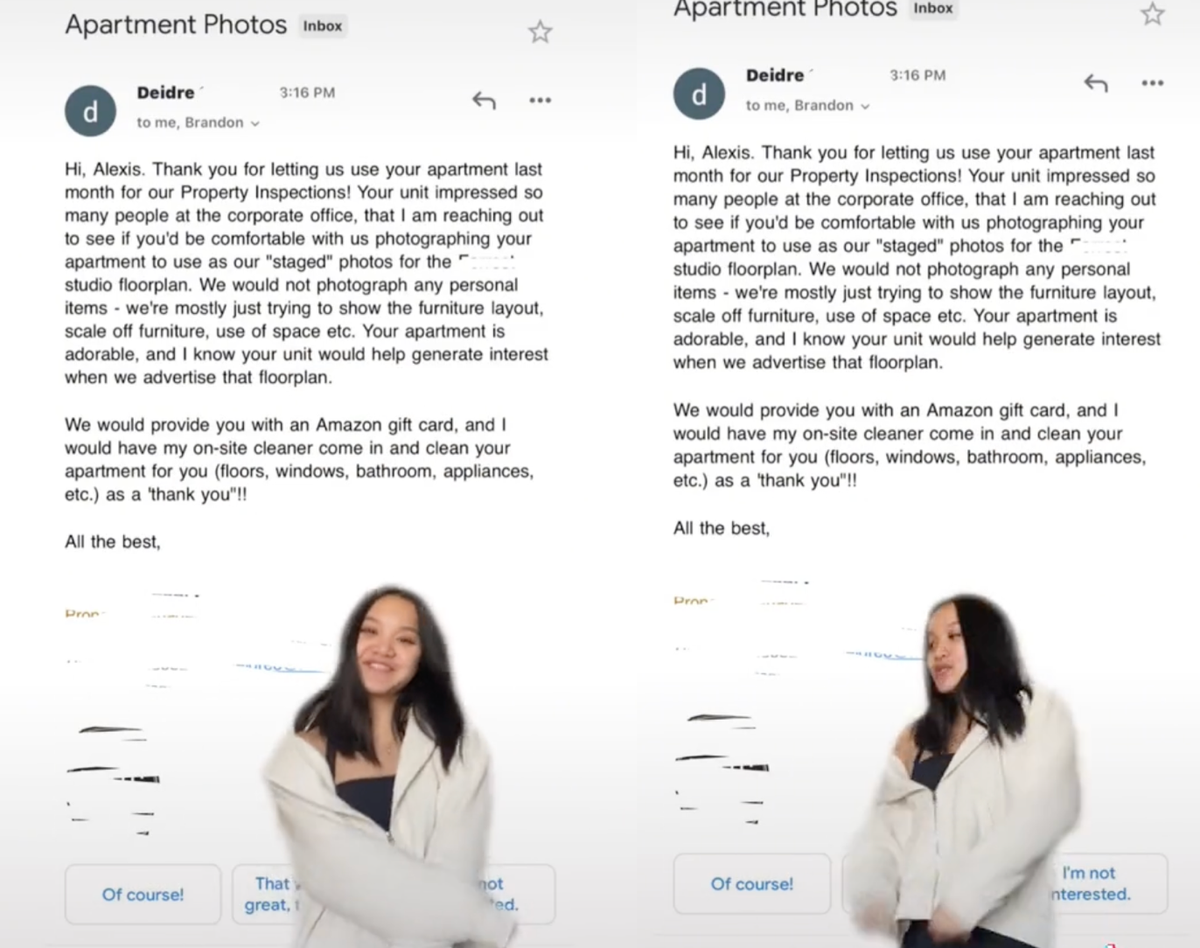