As the plane begins its descent into Amritsar on a cloudless day, the first thing you notice is how close the mountains are to the city, shadowed by the Himachal and Kashmir ranges to its North-East. As the plane dips further the lush green fields around the city gladden your eyes, and then the heart skips a beat with the divine image of the Golden Temple around which the town came about.

Amritsar, in fact, was a city of many gardens, and during the days of the Khalsa Sarkar early 19th century, the sardars of the Misls had many garden estates that caressed its circumference. Apart from the handsome summer retreat of Maharaja Ranjit Singh which included a remarkable diversity of trees and plants, baradaris, fountains and palaces, the town included more than 80 gardens, bagichis and baghs , those that constituted its environmental architecture. We have been degenerate enough to replace most of these exquisite spaces with concrete monstrosities, brick and mortar, and the ultimate sign of progress, the interlocking tile-ways.

To learn more about these vistas and the legends of historical flows, an interesting bunch of young scholars from an Ahmedabad University dropped in. Dr. Sarbjot Behl, Dean, Guru Nanak Dev University, talked to them about the city’s metamorphosis over time, its concentric growth around the Darbar Sahib, the breakout from the walled interior once the British came. Thus, the creation of the Civil Lines including the canal colony system and cantonments, segregating the ‘natives’ inside from the ‘civil’ outside.

Yours truly stuck to the theme of the Green Revolution, its impact on the lifestyles of people, and its sustainability in today’s context. While making the slides for the presentation it got me thinking about our basic agrarian countenance and how the farm still plays a key role in our lives. There is a certain romance about farm life and a yearning even among the city folks to replicate it as micro endeavours in our kitchen gardens and even our flowering greens. There is perhaps nothing as soothing as the sight of a seed transforming into a sapling, and a sapling into a bush, a tree, a succulent vegetable, or a flowering plant. A few of our more accomplished ladies have even established WhatsApp groups which give opportunity to aficionados to send out their accomplishments of manicured gardens and rare flowering species in pictorial form, much to the ‘oohs and aahs’ of the constituents.

Amritsar, in fact, was a city of many gardens, and during the days of the Khalsa Sarkar early 19th century, the sardars of the Misls had many garden estates that caressed its circumference. (Gunbir Singh)

Rashmi Talwar who leads one such effort has even grown a Chinar tree in her garden apart from black bamboo, redwood, a fossil tree, the Gingko Biloba with triangular leaves, Fuchsia, Bulgarian apples, and other fruit varieties. Most of my novice posts in the group are frowned upon or ignored by the more happening crowd. In a couple of their gatherings, which usually showcase a garden of significance, and ample potluck goodies to eat, our now elected MLA Dr. Inderbir Nijjar, myself, and the beaming spouse of the house are the three males that usually intrude upon the female bastion.

The evenings are endearing, and it is a delight to see the manicured gardens as well as the camaraderie of the elegant hostesses. To top it all one gets a plant as the icing on the cake – soney te sohaga.

Similarly, kitchen gardening groups provide us opportunity to talk organic, get advice on homemade pest control, and fertiliser recipes. I share snaps of produce from the terrace kitchen garden where one plants broccoli and muskmelon, cucumbers and chilly, even ash gourds and bitter gourds, a perma supply of spinach, mint, and dill among other goodies. Apart from a house full of evergreens fed with compost made out of our household waste, I also gather figs from my potted tree, Aloe Vera and Moringa leaves from the other pots. It is so satisfying to churn out organic food from our green waste that would otherwise add to the city’s woes. We become a zero-garbage household and get to pluck our own coriander and baby spinach.

A few of our more accomplished ladies have even established WhatsApp groups which give opportunity to aficionados to send out their accomplishments of manicured gardens and rare flowering species in pictorial form, much to the ‘oohs and aahs’ of the constituents. (Gunbir Singh)

The tradition of farming defines our rural life and deeply reflects upon our urban existence. When it rains, we relish the unseasonal downpour, but at the back of our minds, the farmers’ wheat lying in the mandis bothers us, and so does the flattening crop during a hailstorm, which otherwise is exhilarating. It is a natural affinity to the farmer, the food giver, and an important cog in the wheel of the urban economy. More so an inseparable part of the community that we belong to.

Amritsar till the partition of the country was not even the mainstream producer of wheat and rice. It was Lehanda Punjab, the Punjab of the setting sun, now in Pakistan which was more the producer of grain in the fertile plains between Ravi and Chenab. However, the 1943 Bengal famine and the subsequent hunger among the post-independence minions reinforced the need to raise food production substantially. The initial knee-jerk approach was to import. In 1955 an agreement with America allowed import of 3.1 million metric tonnes of wheat annually for three years under the PL480 programme.

But the real change was brought about by Dr. Norman Ernst Borlaug, who mastered the art of redoubling wheat production. Interestingly it was after the bombs were dropped on Hiroshima and Nagasaki that a guilt-ridden America participated in the rebuilding of Japan and chanced upon the dwarf Narin wheat variety. Taking it back home and blending it with sturdier Mexican strains, high yields were achieved in adverse weather conditions. He thus began to be called the Father of the Green Revolution and won a Nobel Prize as well.

The Father of the Green Revolution in India however is Dr. MS Swaminathan, who took the cues from Borlaug, and made Punjab the Granary of the Nation. It was in 1966, three years after the visit of Norman that 18000 metric tonnes of these developed wheat seeds were imported into India. Farmers in the fields of Amritsar and our Chardha Punjab (Land of the Rising sun) moved heaven on earth to actually make the nation self-sufficient and a net exporter within a few years. They then shifted their might to rice paddies, cane sugar and cotton among others as well. Their success in proficient dairy and poultry is well documented, thus earning the title of Sunehrah Punjab, Golden Punjab.

As the land of the Green Revolution (1967-1978), Punjab became acknowledged as a treasure trove and the Punjabi as the nation’s blue-eyed boy. However, the territory itself saw depletion with poorly thought-out politics that reduced it to a little Punjabi Suba. After the state was divided by partition, it was redivided again on linguistic lines. It lost its hills to Himachal, its proximity to the national capital and its industrial competence to Haryana, and even its own Capital to a shared entity. Now reduced to a 50000 sq. km region, a fourth of the size of Pakistan’s Lehndah Punjab, its farm prowess prevailed. Meanwhile, the city of Amritsar became known as its cultural and spiritual capital.

But its own people forgot what they owed to the land, its safekeeping and sustainability. The nation looked the other way when in 37 years only 3.2% of arable land was added against huge increases in fertilizer consumption, 797% in just the NPK combo. Punjab now was left with just 2% of the country’s farmland, and yet it accounted for 15% of the nation’s pesticide usage. Growing thirsty crops rather than the traditional millets, the oilseeds, or pulses, our aquifers emptied out quickly. Enough degradation and depletion for Green Revolution’s Father Swaminathan to be worried. As he sat next to me on the dais at Khalsa College in the April of 2013 he shared with me his worries. Upon hearing the efforts of our Foundation to motivate farmers towards organic cultivation, spreading awareness on natural food consumption amongst citizens, removing intermediaries through our Organic Farmers Markets, he got up and interrupted the other expert speaker. He clasped my hand and said, “Sitting here at Amritsar in the land of the Green Revolution I declare that with such missionary efforts as I have heard from Mr. Singh just now I see the beginning of the Evergreen Revolution.”

This was further strengthened in 2018 by the Vice Chairman of Niti Aayog, Rajiv Kumar, who by snubbing the speaker who was lauding the sacrifices and the enterprise of Punjabis providing food security for the nation for decades said pretty much – You worry about your state of affairs, your environment, paddy-wheat monoculture, getting out of MSP, diminishing size of landholding, indebtedness and ill health, and let us bother about food security. The change of mood was evident and the message loud and clear. The nation had enough rain-fed areas for paddy and wheat now, so you fend for yourself. The belligerence was further evident in the farm laws, enforcing rather than handholding change, even enactment of laws stipulating punishment up to 10 years, and Rs. 1 crore fine to the stubble burning farmer et al.

While the farmer fights for his existence we do our bit in trying to green our gardens and raise voices against depleting waters, degraded soils, and polluted airs while our children are giving up and heading elsewhere. But then this is the land of optimism, of Chardhi Kalaa, so who knows? These young minds may bring to us value adds like grape farming and making wines, modern dairy and cheese-making, and even find ways to land produce from their homeland processed or otherwise onto markets abroad. That or bring in hi-tech for aquaponics, hydroponics, perhaps even pseudo meats such as Fake Chicken nuggets, Mock Mozzarella cheese, Pretend Pork and Forged Fish.

While the farmer fights for his existence, people such as us try to assist with environmental sustenance. We go around planting trees like there is no tomorrow. The most satisfying of these ventures was the Eco-Amritsar program that one ran for five years from 2013 onwards. We planted 100 Banyans on one day and nurtured them, 1000 diverse trees with an exciting team of 800 NCC cadets on another, whole colonies lined with shade-giving varieties, and so on. There are so many others who do their bit and more.

Whether those who keep their lawns green, others who grow vegetables in their small patches of soil, those who plant shrubs and water bushes on roadsides, more who ceaselessly plant trees, the efforts are worthwhile indeed. One of the satirists in our tree plantation group once remarked that the cutters are way more than the planters, but perhaps all this effort will give someone shade for a while – Hor kuj nahin te kuj samey chaan hi sahi.

(The writer is an Amritsar-based environmental, philanthropist and author who loves all things Ambarsari)

What to Cook This Week

Wed Jun 1 , 2022
Good morning. One summer Sunday in 2008, Ligaya Mishan discovered the most remarkable biscotti. They were, she wrote for The New York Times Magazine this week, “thin enough to snap smartly under the teeth and then obligingly crumble.” And they were made by Mark Sopchak, a pastry chef who ran […] 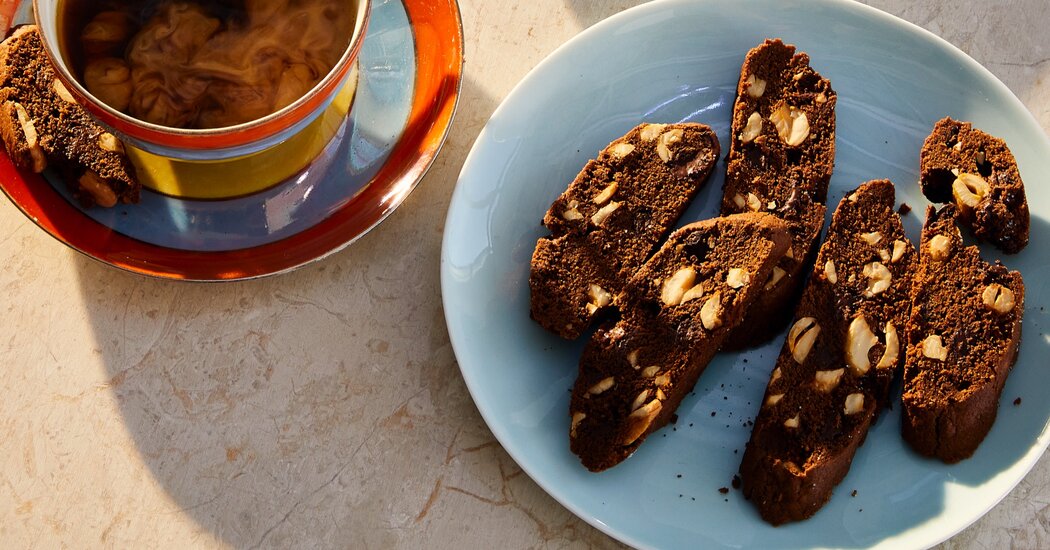