Amanal Petros is on vacation, or at least something of a break from his usual punishing running routine. Instead of running 200 kilometers a week, he’s just doing 80 per week to help him stay fit. It is the holiday season after all, and his last race was a few weeks ago.

The 26-year-old improved his own German marathon record by almost a minute at the Maraton de Valencia. Petros crossed the finish line in 11th place with a time of 2:06:26 hours.

“It was very nice. I gained a lot of experience,” Petros says with satisfaction. “But the most important thing was that I was able to improve my time and set another German record.” Earlier this year, Petros also broke a 28-year-old national best set by Carsten Eich, completing the half marathon in a time of 1:00:09 hours.

Now, though, “Aman,” as his teammates call him, has time to take it easy as he sits on his sofa in the living room and admires the small Christmas tree that he’s decorated with gold ornaments, a bit of tinsel and a small string of lights.

“It’s cozy, and I love the Christmas tree and the Christmas season here in Germany,” Petros explains. “And since I’m here this month, I want to take the opportunity to create a Christmas mood.”

The marathon runner is pleased and a bit proud of himself, because in his native Ethiopia “the women always did the decorating at Christmas time. Here in Germany, the men do it too, and that’s great.”

While he was able to spend the holidays with his girlfriend, the rest of his family couldn’t celebrate the holiday in peace this year – something that’s been weighing on his mind every day. His mother and two sisters live in the Tigray region of northern Ethiopia, where a war is currently raging.

The Tigray conflict has sparked a severe humanitarian crisis in the country. According to the United Nations (UN), thousands of people have been killed, nearly two million have been displaced, and more than five million people are in need of humanitarian aid.

The region is largely cut off from the rest of the world and the supply situation is reported to be catastrophic. According to the UN, 400,000 people are suffering from hunger in Tigray alone. And according to the United Nations Children’s Fund (UNICEF), more than 100,000 children could be affected by severe malnutrition in the next few months. There are also reports of serious human rights violations such as rape, looting and executions.

‘It doesn’t get any worse than that’

“For 396 days the war has been raging in Ethiopia,” Petros says without even thinking about the number. “I count every single day.”

The runner has had no contact with his family for the past two months, as communication lines have been cut.

“For my sisters and my mother it’s like being in a prison. I feel sorry for the people. The children who die every day for no reason. Innocent people dying every day. It doesn’t get any worse than that,” Petros says. 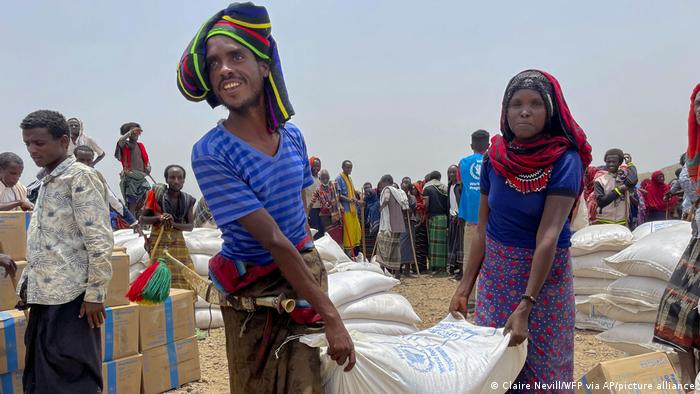 A good 7,500 kilometers (4,660 miles) away in his apartment in the western German city of Bochum, the 26-year-old now hopes every day for a sign of life from his relatives.

“It’s very hard. Sometimes I sleep and dream very badly. But I try not to give up hope.”

Running helps him keep going; it makes him strong and gives him confidence.

“If I gave up my sport, I would lose everything,” Petros says. “I already lost my family, then I would lose the only thing I have left to hold on to.”

Via social media and in media interviews, Petros uses the public notoriety that goes along with being an elite athlete to draw attention to the situation in his homeland.

When “Aman” came to Germany as a refugee at the age of 16, he had no idea that he would one day become such a successful marathon runner. Back in Ethiopia, he was already working in the fields and tending to the animals by the time he was five. But when he arrived in Germany almost a decade ago, he was confronted with completely new problems. 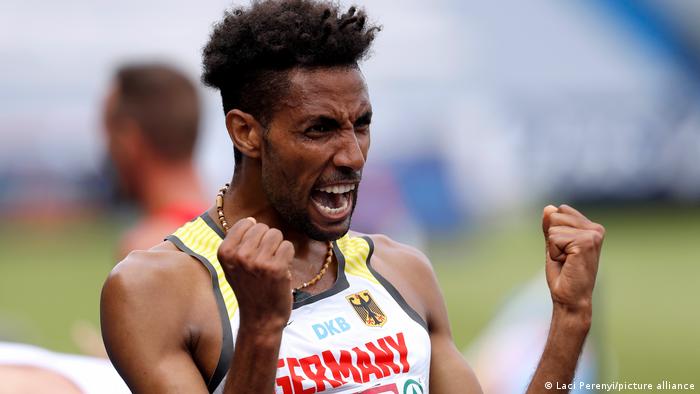 “Learning the language was a big challenge,” Petros recalls. “But an even bigger one was understanding the German mentality.

“I joined a running group made up of people I didn’t know. In Ethiopia, we also greet people we don’t know by kissing them on the cheek, so I did so with this group.”

Now, Petros can laugh about how taken aback his new running mates were, saying that they must have wondered “what kind of wierdo” had just joined their group. He has long since come to understand the German mentality and no longer kisses people on the cheeks.

Petros’ first official race was a local marathon on June 29, 2012, when the then-17-year-old finished first with a two-and-a-half-minute lead over the runner-up. Since then, he has never looked back Now he has sights set on the European marathon record (2:03:36 hours).

Apart from his athletic goals, the long-distance runner has one overarching wish: “I want to see my family again, to hear their voices. And for there to be peace, democracy and freedom of expression in my homeland again.”

This article was translated from German.

A liberal dose of pepper on his terrace

Tue Dec 28 , 2021
When pastor P.D. Yohannan took a flight to Kerala in March 2020, he had his return ticket ready. But COVID-19 disrupted all his plans, confining him to his homestead in Kottarakara. Since lockdown meant zero routine business, he started cultivating pepper plants on terrace and today his little garden is […]