Those are some of the clues that support the belief that Alabama corrections official Vicky White and murder suspect Casey White had a romantic relationship before both disappeared last week, said Lauderdale County Sheriff Rick Singleton.

Vicky White, 56, and Casey White, 38, who are not related, went missing Friday morning after she said she was taking the inmate to the courthouse and was planning to seek medical attention because she wasn’t feeling well.

But the two never arrived at the courthouse. And Vicky White didn’t make it to the medical facility.

Vicky White is now the subject of an active arrest warrant for allegedly permitting or facilitating escape in the first degree, the sheriff said Monday. Authorities believe the officer and inmate had a romantic relationship that extended into Vicky White’s non-work hours, Singleton said.

Vicky White had made major financial moves in the weeks leading up to the escape. She had announced plans to retire as the assistant director of corrections and sold her home for a price well below market value.

The home was sold on April 18 for $95,550, documents show, while online records with Lauderdale County list the home’s total parcel value at $235,600.

Vicky and Casey White’s relationship traces back to as early as 2020, authorities said, when Casey White — who was already serving time in a state prison — was first brought to Lauderdale County for an arraignment on murder charges related to the 2015 death of 59-year-old Connie Ridgeway.

“As far as we know that was the earliest physical contact they had,” Singleton said.

Singleton said Casey White and Vicky White had a “special relationship” that was confirmed, in part, by other inmates who told investigators Casey White “was getting extra food on his trays” and “was getting privileges no one else got. And this was all coming from her.”

The sheriff said the pair kept communicating after Casey White was transferred back to the state prison, where he was serving 75 years for a series of crimes in 2015. Casey White returned to the Lauderdale County Detention Facility in February to attend court hearings in his capital murder case.

The Lauderdale County jail had a policy mandating two sworn deputies accompany inmates at all times — including during transportation to the courthouse. Singleton said that policy was emphasized after authorities discovered Casey White had a makeshift knife on him in 2020 and had planned to escape and take a hostage.

But last Friday morning, Vicky White ordered that Casey White be prepared for transport, telling the booking officer that since other officers had already left for court and she was the only officer available with a certified firearm, she was going to take him to the courthouse alone, the sheriff said.

“Being the boss and over the transport, she just informed the booking officer that she was going to carry him to the courthouse and drop him off, which was a flagrant violation of policy. But I’m sure because it was her boss, the booking officer didn’t question it,” Singleton said.

The sheriff has described Casey White as “an extremely dangerous person” and cautioned people not to approach him if they see him and call police instead.

Authorities assume Casey White is armed because Vicky White was armed. The US Marshals Service warned Tuesday they might have an AR-15 rifle and a shotgun.

How the escape unfolded

Surveillance video released by the detention center Tuesday shows Casey White, shackled and handcuffed in an orange jumpsuit, being escorted into the back of Vicky White’s patrol car Friday morning.

From there, Singleton says, the pair drove to a shopping center less than 10 minutes away, abandoned the patrol car and got into a gold or copper-colored 2007 Ford Edge SUV. The vehicle has minor damage to the rear left bumper, authorities said.

Vicky White bought the car in Rogersville, about 25 miles east of Lauderdale County, and staged it in the parking lot the night before their disappearance, Singleton said.

“We know that there was never any effort to go to the courthouse. They went straight to Florence Square parking lot, dumped the patrol car, got in the other vehicle and left,” Singleton said.

“We assume they are going to ditch that car at the first opportunity when they get wind that the description is out there,” the sheriff said. “So we’re back to square one.”

Florence City Council Member Bill Griffin said he saw Vicky White and Casey White on Friday in a vehicle during this escape.

Griffin said he was out shooting a commercial for his council district when he saw Vicky White drive past him with Casey White in the back seat. He recognized her and so waved at her, Griffin said. They drove by slowly, and and she waved back at him twice before continuing on their way through a roundabout.

Griffin said when he returned home that evening he learned from his wife that the two were missing.

‘I am so disappointed in her,’ DA says

Vicky White was scheduled to retire on the day she went missing after almost two decades with the department — though her retirement fund paperwork had not been processed, the sheriff said.

Now, relatives and colleagues of the woman described as “a model employee” with “an unblemished record” have expressed disbelief about her disappearance and emerging details.

Lauderdale County District Attorney Chris Connolly last spoke with Vicky White the day before she disappeared and said he was “absolutely stunned” to learn of the situation. Connoly described the officer as “the most solid person at the jail.”

“I am so disappointed in her,” he said. “She was trusted, and she exploited that trust.”

Vicky White’s mother, who she had been living with for the past five weeks after selling her home, said she never heard her daughter mention Casey White and was shocked to find out she had gone missing with an accused murderer.

“As a mother, I didn’t know how to act because I thought at first it was a mistake. And then when I found out for sure it was, it was just disbelief,” Pat Davis told CNN affiliate WAAY.

Davis lived next door to her daughter and said the below-market home sale didn’t raise any red flags, she told CNN on Wednesday.

“She would come home after work, eat supper at my house, and pick up her dog,” she told CNN. “She’d walk her dog and that was her routine every day.”

They last spoke on Friday and discussed her dog, Davis said.

The Marshals Service is offering a reward of up to $10,000 for information leading to the location of the fugitive inmate and up to $5,000 for the missing officer.

Correction: An earlier version of this story had an outdated value for Vicky White’s home; the most recent value was $235,600. It also included the wrong age for Connie Ridgeway; she was 59 when she died.

This Light-Bending Micro Apartment Will Make You Look Twice

Sun May 8 , 2022
When a couple in their 40s tasked Miogui Architecture with turning a 137-square-foot Parisian apartment into a flexible live/work space, the firm focused on scale, sunlight, and geometry. “Before our intervention, the bathroom and the kitchen were too large for the size of the apartment, and the bathroom had very […] 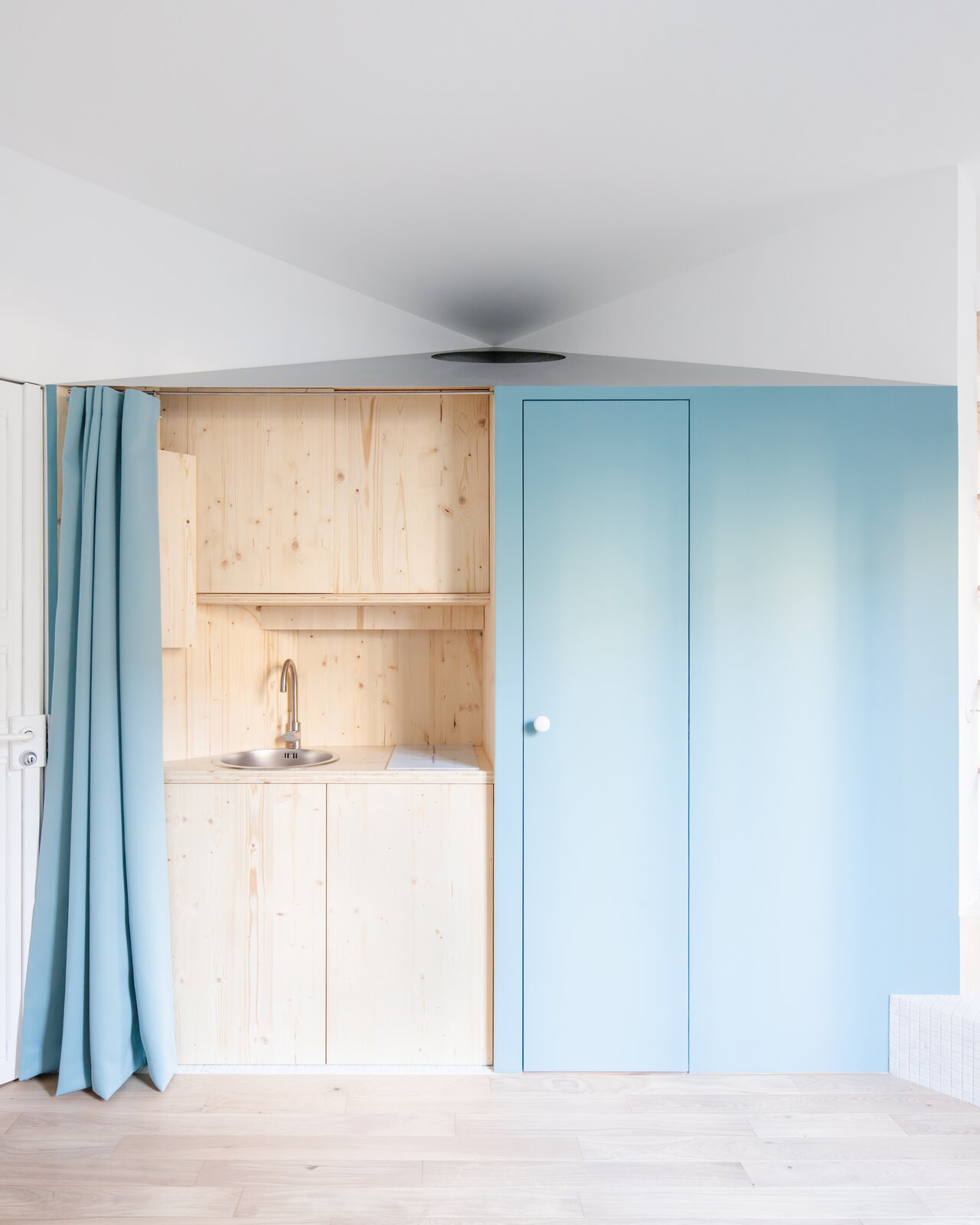