When furniture designer Nada Debs first moved to Beirut from London in 2000 on a quest to reconnect with her Lebanese roots, her parents offered her the apartment they’d bought in the 1980s. “At the time it was rented out and they just said: ‘Why don’t you take it?’ So it was more a marriage of convenience than the thunderclap of love at first sight.”

Located on the 10th floor of a 1970s apartment block in a residential area of West Beirut, there was nothing immediately remarkable about the space.

“The apartment isn’t something I’d have chosen,” says Debs. “But I made the best of it and because it was simple, I had a lot of freedom to use my furniture. I would make prototypes, put them out and see how they looked, before I made them into collections. I used my home as kind of a place of experimentation.”

When Debs first got her hands on the apartment she set about stamping her vision on the space, tearing down walls to let the light in and make the most of the breathtaking views of the sea and mountains.

“I love breaking walls,” she says with a gleeful twinkle. “The apartment was originally designed for a family and there were four bedrooms, but it’s just me here, so I tried to make it less for a family and more a space for entertaining.”

Today her home is flooded with light as Debs leads the way through a series of elegant living spaces, popping with jewel colours. Her curvaceous Yves Klein Blue sofa, that she designed herself, is a striking focal point. “I’m a big fan of blue – the blues of Beirut are beautiful. And every day the colour of this sea and the sky is different, so that definitely influenced me,” she says.

Then there’s the cosy pink kitchen/diner, which was inspired by the lush visuals of the Hong Kong-set movie In the Mood for Love. From here we walk through to the yellow TV room, which was originally the balcony, but now serves as an indoor/outdoor living area that catches the morning sun.

“I always like to start with colour or colour combinations, before thinking about form and then, finally, I address the details,” she says. “In this house each room is themed. I wouldn’t do that for a client, but this is more an experimental space and I think the colours work together.”

And with three different living rooms to choose from, there’s a room for every mood. “It’s, ‘Oh am I going to be blue-me today or am I going yellow today?’ And it’s really interesting, when I have guests, people are drawn to different colours. Some people look at the pink room and think, ‘Oh I’m not going in there, it’s a bit too cozy, I’ll never get up again. So it’s more for late at night.’”

Dramatic dark doors add an extra layer of sophistication, while rugs play a key role in separating the spaces.

“I based the apartment on placing carpets first,” says Debs. “When you have an open space it’s really hard to place furniture first, but when you put a carpet down that defines the space.”

When it comes to form, Nada is big on rounded corners and spherical shapes, partly because they make a home more friendly, “we’re just looking for things that are soft when we want to touch which we all need, especially at the moment after Covid.”

But also because it allows her to push the envelope with the craft. “The Romania table in the dining room uses a technique called marquetry strips and I noticed I could curve it, so I decided to create a whole line of furniture where I could do that,” she explains.

Of course, the large apartment, with its clean lines and open space, is the perfect backdrop to her standout furniture and many of the pieces, like the Coffee Bean coffee table, so named because her son, who was six at the time, said it looked like a coffee bean, are available made-to-order from her website.

Despite her own elegant, pared-back aesthetic, Debs is wary of hotel-like, interior-designed spaces. “Too perfect is soulless. You have to have knick-knacks,” she says firmly. “A home should be personalised and not so rigid. The frame can be a bit to the side, it doesn’t have to be perfect, that’s OK.”

For her own part, she likes to mix up finds from Beirut’s Basta antique market alongside favourite art pieces and the odd family heirloom, like the oversized round Chinese terracotta rug in the sitting room, which her uncle bought back from Shanghai in the 1950s.

Originally trained in interior architecture at the prestigious Rhode Island School of Design in the US, Debs had been working with marquetry in the UK, a technique used to create patterns on furniture, but her move to Beirut inspired a bold new direction in her work.

“Because I grew up in Japan, I introduced my Japanese aesthetics, which is about simplifying and bringing things down to its essence.” They didn’t think that they were allowed to do that. They were sticking to the old ways, because that’s what they thought was the right thing to do. But I kind of gave them the OK. You could change the patterns. You could change the models, you can keep it simple, and suddenly you open this whole door.”

The concrete tiles that line the wall of the yellow TV area with their modern take on traditional Middle Eastern geometric patterns and the white Arabesque chairs with their swirling foliage pattern and the lattice screen, are all examples of her “Neo Arabian” aesthetic, as she calls it.

“When I moved to Beirut, after Japan where no one was like me, I was looking for like-minded people, but then I realised I wasn’t Lebanese either, because of my upbringing, so my work is a reflection of that,” she explains. “That’s the little twist in my work, because Japanese style is quite understated, whereas in the Middle East everything is overstated.”

Sun Jan 16 , 2022
Snow melt can irritate a pet’s skin, the Humane Society said. ATLANTA — Many people have plans to keep the human family members safe and warm with the expected winter weather this Sunday, but people should also keep the furry family members in mind. To help protect them from potential wind […] 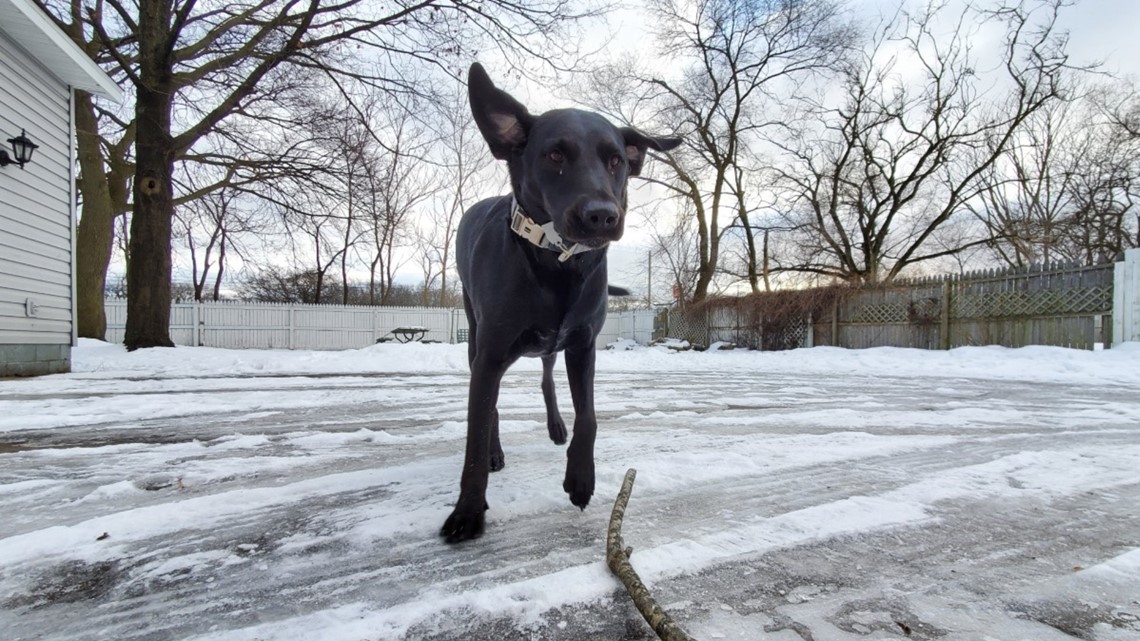