Editor’s note: In this recurring profile series, SFGATE food editor Steph Rodriguez sits down with Bay Area chefs and those with deep ties to the restaurant industry at their favorite seedy dives, cozy mom-and-pop spots and beloved family-owned taquerias. Over deliciously cheap bites, ‘Did You Eat?’ offers a new perspective into the lives of the region’s most talented tastemakers.

Sitting under a pop-up canopy situated in the parking lot of Tacos El Patron in Pleasant Hill, Tarts de Feybesse chef and co-owner Monique Feybesse takes a sturdy slice of pink radish and casually scoops up a cube of lengua from her taco basket like she’s eating nachos.

Between bites of overstuffed tacos and a large serving of ceviche with plump lime-marinated shrimp, she sips from a towering orange melon agua fresca — completely comfortable at her favorite neighborhood taqueria.

Tacos El Patron on Monument Boulevard is her go-to spot for a quick and delicious snack between picking up her 5-year-old son, Louis, from school. It’s also Louis’ preferred quesadilla spot.

“Should we do the cheers taco now?” Feybesse asks, holding a pudgy flour tortilla filled with fried fish. “I’ll do this one. It looks massive. Alright! Yeah, cheers! Bon appetit.”

Besides running the classically French-influenced bakery Tarts de Feybesse with her husband Paul in Vallejo, she was also a recent contestant on the 19th season of the long-running Bravo reality television series “Top Chef.”

The latest season of the popular culinary competition, where 15 of the country’s most decorated chefs compete for the titular honor, as well as $250,000, is set in Houston. Feybesse made it through many of the show’s out-of-the-box cooking challenges, making sticky rice cakes and beef tartare with cured egg yolk, but was ultimately asked to pack her knives by host Padma Lakshmi in the sixth episode.

“I felt so bad being on the show, in a way, because I left my kids. I left my newborn son. He was like 1 years old, and I felt like, ‘Should I even be here?’” she said. “To not speak to them so often was insane. And you can see that I really missed them and that can weigh on you, for sure.”

With “Top Chef” behind her, Feybesse and her husband, who, between the two of them worked at some of the finest Michelin-starred restaurants from New York to Copenhagen to Paris, are the two-person assembly line at Tarts de Feybesse. For now, the bakery operates out of a commercial kitchen in Vallejo and takes online orders from dedicated customers. But plans to open a retail location in San Francisco are already in the works.

Together, the two see the art of pastry through savory eyes and create intricately decorated French-inspired desserts such as seasonal fruit and fine chocolate tarts that mimic the appearance of caviar, marbled banana cake loaves with roasted banana caramel and chocolate crunch, black sesame financiers and perfectly piped eclairs with a variety of silky pastry creams, including coconut, grapefruit and tiramisu.

“Paul is straight-up production, and he’s a machine. He’s just as precise as a robot. That’s why all the stuff you see online is pretty much how it looks in real life,” she said. “That’s the beauty of Tarts de Feybesse, is it’s beautiful and it’s gorgeous and it’s delicious, and we want to keep that. That’s the spirit.”

‘I need to just jump’

While other seniors were graduating high school and planning what four-year universities they would attend in the fall, Feybesse finished early at age 17, going off to culinary school in 2006 at the California Culinary Academy in San Francisco.

From there, she worked all over the Bay Area, including at Madera in Menlo Park, a one-star Michelin restaurant that earned the coveted rank within its first year of opening. Then, Feybesse worked as a sous chef for Masa’s, a legendary French fine dining establishment in San Francisco and one of the city’s last white tablecloth restaurants. Its super-refined ambiance was led by renowned chef Gregory Short, perhaps best known as one of the first sous chefs of The French Laundry under Thomas Keller.

“I was the sous chef at Masa’s in San Francisco until its closure, and that kind of led me to Europe,” Feybesse said. “When that closed, I was like, ‘OK, what do I want to do? I need to just jump.’ So I booked a one-way ticket to Geranium, to Copenhagen, and I was like, ‘OK, I need to get a job.’”

Determined as ever even after Masa’s closure, Feybesse took a one-way flight to Copenhagen in 2013. Not interested in a stage or internship, she ended up landing the job she craved at the seminal Scandinavian restaurant Geranium under chef-owner Rasmus Kofoed, who, in 2016, was the first chef in Denmark to earn three Michelin stars.

Geranium is where Feybesse’s love for cooking evolved, challenging her to dig deep during those 16-hour days in the kitchen. She lived for the rush and the indescribable feeling of accomplishment after each dinner service. Plus, a budding romance between her and Paul only added to the magic she experienced in Copenhagen. But it didn’t last.

With an expired visa, Feybesse was forced to jump yet again. This time, it was a one-way ticket to New York, where she accepted a position at Atera, another Michelin-garnering restaurant, then under the direction of chef Matthew Lightner.

“It’s rare to meet someone in the kitchen so driven and so committed to execution, but also approach the work with such grace and humility,” said Lightner, who is now the chef and partner at Okta, a restaurant slated to open in August just south of Portland, Oregon. “Her attitude is built on positivity, which touched and inspired everyone she worked with.“

Her commitment to the chef profession and truly radiant personality are just two qualities that intrigued Paul about his future wife. When she left Geranium in Copenhagen for New York, Paul, who is from the Lozere region of France, decided it was his time to jump.

“She started in New York, and I said, ‘F—k it. I love her.’ I asked for two weeks’ vacation to my chef in Denmark. I basically took a flight and asked her hand, and we got married in New York three days after,” Paul said. “When I came back, I was in trouble with my chef, and he was like, ‘Where have you been?’ because I took two more weeks of vacation to enjoy New York.”

A year later, when Feybesse was pregnant with her first son, Louis, Tarts de Feybesse started with its signature apple tart, a much sought-after customer favorite created in the couple’s home kitchen in Vallejo when they moved back to the U.S. in 2016. After she gave birth to Louis, Feybesse suddenly had to figure out how to balance motherhood with her passion for cooking.

“When I first had Louis, it took me about six months to get back into the restaurant. I was always that worker who would fly to places and just work. Work 16-hour days? No problem. Holidays? No problem. I’ll do it all,” she said. “When I had my child, that changed in a way. Can I work 16 hours a day? No. Do I need to lose myself and what I love, or not? That’s the choice. I love being a mom, but where do I go from here?”

She became chef de cuisine at Cavallo Point’s fine dining restaurant in Sausalito, a place where she learned to balance family life with what she loved doing — making delicious food. At Cavallo Point, Feybesse was in her element, running tasting menus and dinner service every night while her husband worked in the city for chef Corey Lee of Benu.

In 2020, as restaurants navigated the brunt of the pandemic, Paul found himself furloughed, as many chefs did, while Feybesse was on maternity leave caring for their newborn son, Yann. But a sweet opportunity was bubbling beneath the surface.

The two relaunched Tarts de Feybesse in 2020, baking fresh loaves of sourdough bread for neighbors for $8 each as grocery stores ran bare. Then, the addition of their hand-sliced apple rose tart changed everything.

With the success of Tarts de Feybesse’s online orders, the couple decided it was time to leave their restaurant jobs and pour all of their energy into the bakery. Now, the two split their time between raising their sons, with baby No. 3 on the way, and running the business.

“I love it. It’s really immersive for my family. My 5-year-old loves food. He eats everything, but they’re always surrounded by food, and that’s what makes it really special for me at this point, is that I’m showing them an example of working really hard for what we love,” she said. “I’m really thankful that my husband and I can run pop-ups and still have that same vibe, the same kind of food that we do love and still bring the passion, but in a toned-down way.”

Eventually, the two would like to operate a restaurant group with a Tarts de Feybesse retail location, a fine dining restaurant and a casual-style bistro all serving the delicious French-inspired dishes they learned to cook together in the world’s most prestigious kitchens.

Feybesse’s culinary dreams are vast, but as she snaps off a piece of toasted corn tortilla and scoops up one last bite of zesty ceviche from Tacos El Patron, she says she’s willing to jump again to show her sons just how brave mommy can be with the support of her family and a love that followed her from Paris back to the Bay Area.

“My husband loves to create, and so do I,” she said. “That’s what makes it still exciting for us. The dream is big. We’re working 24/7 on our dream, and that’s what’s really special because we never stop moving ever, ever. It’s really rare.”

Sun Apr 24 , 2022
Developed over centuries from a vast range of influences, Moorish design is surprisingly versatile, offering myriad opportunities to craft a unique contemporary interior that exudes character and originality.  Moorish architecture and interior design were born in medieval North Africa, Spain and Portugal, which were once a single empire known as […] 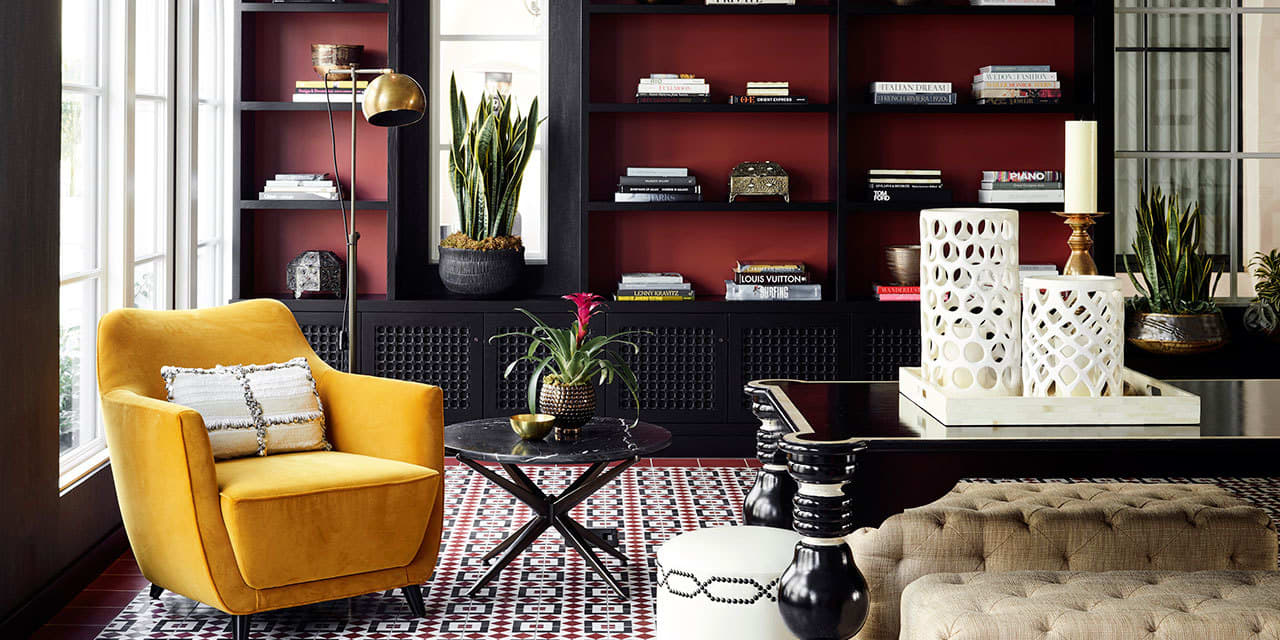